It was also acknowledged that all men have an active role to play in ending gender-based violence.

Campus Africa, a student housing centre, hosted a night vigil at the Doornfontein residence on September 11 to commemorate women who have been victims of gender-based violence.

Various residences in Johannesburg, including Braamlofts, 80 Jorrisen, YMCA and Doornfontein, fall under Campus Africa. Students residing in these buildings attended the ceremony.

The vigil was organised by Sibongile Mantje, a second-year education student from the University of  Johannesburg (UJ). She said that recent conversations surroundin 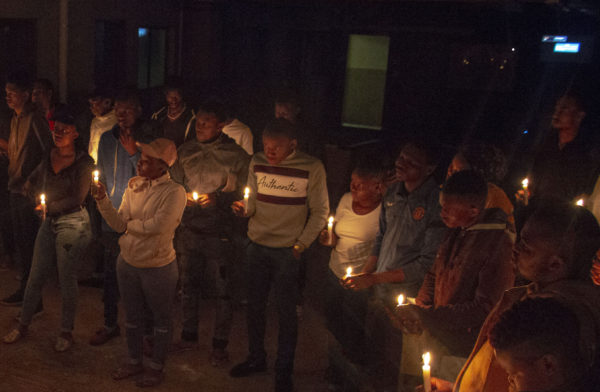 g women’s safety in the country, as well as her own personal experiences, inspired the idea.

“It is close to my heart. I come from a background of abuse and I feel that this commemoration was necessary, not only to remember the lives that were lost, but also to encourage women to support each other,” Mantje told Wits Vuvuzela.

Another second-year education student from UJ, Queen Chuene, opened the vigil by naming and defining the various forms of violence experienced by women.

“Before we can solve issues on violence and the abuse of women, we need to understand what these (issues) are. Things such as cat-calling, grabbing and even taking off the condom before sex also constitute violations.

“We can’t live in a society where women are living in fear of being who they are, or even wearing what they want to,”  she said.

Despite a low attendance, the vigil attracted more men than women.

“I think it is great that we had more men attending. Women are not doing this to themselves. Men need to understand that they are part of the problem,” said building manager for the YMCA residence, Gift Khoza.

Wits fourth-year BEd student Boiketlo Tlatla echoed these sentiments when she said, “There could have been better attendance to show that these issues are being taken seriously. But the presence of men at the vigil shows that they are prepared to hear more stories from women.”

Tumelo Ntola  spoke about the role that all men should play in putting an end to gender-based violence.

“Sometimes men only acknowledge this as a problem when it affects them personally and this needs to change. They need to speak out and act, even if they have no relation to the victim,” said the fourth-year education student.

With the mandate being similar to events that have been taking place across the country, Khoza said such issues need to be dealt with, to ensure that we do not repeat the same processes of mourning and commemoration again.

“The problem with our society is that we are very reactive. Activism starts on social media, but we need to engage in actions that affect the change we want to see,” Khoza told Wits Vuvuzela.