Clamping down on fear and pain

Feeling pain during sex is common, but for some women it can be unbearable.

“For US women, all we have heard about sex is that it is painful,” says intimacy and relationship coach Tracy Ziman Jacobs. “Immediately our bodies tense up and we are expecting the worst.”

Fear of pain, or “expecting the worst”, is classified as “genito-pelvic pain/penetration disorder”, or vaginismus, a condition that manifests as involuntary pelvic-muscle spasms caused by personal distress or anxiety. A woman suffering from the condition has difficulty allowing a penis, finger or any other object to be inserted into her vagina. Resulting pain may be so severe as to prevent penetration completely.

Candice Chirwa, 23, a master’s student in international relations, told Wits Vuvuzela: “It is like a painful contraction!”

She first experienced chronic genital pain when she suffered severe period cramps after having an intra-uterine contraceptive device inserted when she was 22.

“I could not withstand the cramps,” says Chirwa. “I had to increase my medicine. The pain honestly feels as if someone is inside your uterus, twisting and wringing it, and it increases in intensity.”

Stress and fear are among causes tied strongly to the anxiety-based condition, resulting in involuntary contractions and pain. Unwanted sexual experiences and past traumas caused by such factors as rape, molestation, abuse, religious background, cultural stigmas, sex taboos, sex education and/or any negative association a woman has to her vagina, will cause stress, anxiety and fear.

Women with vaginismus are known to complain of symptoms including muscle tension and pain when touched on or in their genitals: symptoms that may last for minutes, hours or days.

The key is identifying that you have the condition. A visit to a gynaecologist is always recommended.

Dr Razina Patel, a gynaecologist and obstetrician at the Centre of Advanced Medicine, told Wits Vuvuzela: “Most patients have been denied for years that their pain is real and feel enormously relieved when they finally meet a clinician who trusts their symptoms and commits him/herself to a thorough understanding of the complex causes of their sexual pain.”

She says pain during intercourse is common: three out of four women will feel such pain at some time in their life. Vaginismus, however, “is a persistent pain associated with psychological and physical anxiety related to sexual activity, so much so that females exhibit avoidance behaviour (not wanting to engage in sex)”.

Vaginismus is not primarily related to sex. Women with vaginismus may experience genital pain during non-sexual activities such as a gynaecological examination or even when inserting a tampon.

Jacobs says that of the women consulting with her, “young virgins before the age of 18 have expressed intense disgust and discomfort at the thought of penetration.

“Many of these girls use a lot of lubrication to help them use tampons. They need to breathe and relax the muscles in the pelvic floor. Eventually most of them manage to use a tampon,” Jacobs told Wits Vuvuzela.

Fourth-year medical student Alexandra Bench says she was fortunate in that although her first time inserting a tampon was sore, the pain has not been chronic. She attributes this to her Grade 10 life orientation teacher, who told her class: “Girls! You need to take a mirror and look down there! It’s part of you, not something scary.” 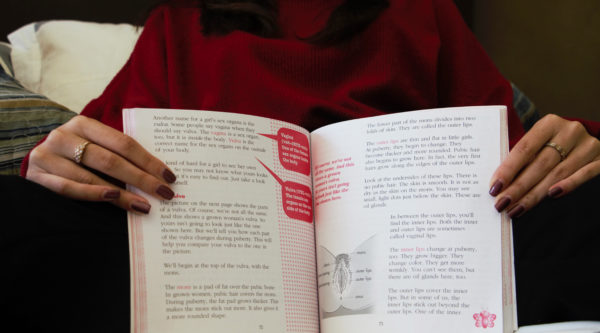 WHAT’S DOWN THERE: A diagram of the inside of a vagina in ‘Ready, Set, Grow’ by Lynda Madaras. Photo: Imaan Moosa

Fifth-year medical student Raadiyah Khan agrees that sex and female reproductive health are nothing to be ashamed of. She told Wits Vuvuzela she had come across women living with different sexual dysfunctions who had suffered for years without seeking help, simply because they were shy, embarrassed or felt ashamed.

“Some of them were scared their husbands or partners would abandon them and find ‘healthier’ or ‘better’ partners. Some of them did not know that sexual intercourse is meant to be pleasurable for them, and assumed the pain was normal,” says Khan. “Others were just ashamed because they felt they had done something to warrant the pain.”

The only way to dispel fear, pain and muscle tension “down there” is by educating and empowering women.

“Say the word ‘Vagina’. Say the word ‘Sex’. Be unapologetic about speaking about your sexual health, because it most likely will make the other person confident as well,” says Chirwa, a women’s sexual and reproductive health advocate.

“Make information about sex available and user friendly. The reason people do not talk about sex is because it is beset with a lot of fear and it is considered a taboo. It is important to change the social norms around sex and ensure that information is provided in a fun, informative way.”

According to Patel and Jacobs, psychosexual behavioural therapy is encouraged to address the underlying negative effects of vaginismus. Women are taught how to command their pelvic floor muscles by controlling their ability to do so in a mirror. Self-contact, self-massage and self-awareness through sexual education are encouraged to increase libido, arousal and clitoral orgasm. If the woman has a partner, active sex play is encouraged.

Once pelvic muscle contractions have been reduced, women are taught how to use vaginal dilators (smooth plastic, rubber or glass cylinder-shaped objects) to expand their vagina to ease sexual activity. An article in Cureus titled Evaluation and Treatment of Female Sexual Pain: A Clinical Review, says that pharmaceutical drugs such as Viagra and Botox injections into the perineal muscles are prescribed and advocated.

“It is important for [men] to understand that for them, sex is exciting and about release into a vessel. For us women…we must wrap our heads around having a large foreign object being thrust into our vaginas.

“Our first sexual encounters are usually painful, which then set us up for further stress, fear and pain. Once men get an understanding of how we work, we can start the healing.”