Transformation begins with dismantling systems of patriarchy and capitalism to create friendlier spaces for women. These are the words of Malebo Sephodi, an author of a book titled Miss Behave, speaking during a ‘Be Her’d’ discussion on September 11.

The discussion, organised by the Wits Law Students Council, questioned whether the constitution favours men over women as well as the experiences of women working within the legal sector.

One of the notable points of the discussion was on the definition of ‘woman’.

Sephodi, said that conversations around how women are defined need to change. 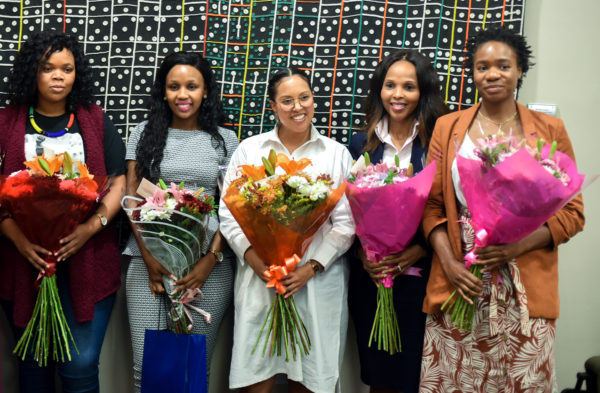 From left) Malebo Sephodi, Tshidi Malete, Alexandra Fitzgerald, Noluthando Moledi and Adanma Yisa  receive flowers and gifts from the Law Students Council after a discussion on the role of women in the legal sector. Photo: Provided

“We need to speak of all women from all localities. We should include in these conversations queer women [and] women in the rural areas whose experiences rarely make it into the mainstream,” she said.

Alexandra Fitzgerald, a senior legal officer at the South African Human Rights Commission, highlighted issues such as sexual harassment faced by women in the workplace.

Drawing from the Centre of Applied Legal Studies (CALS) 2014 report on the Transformation of the Legal Profession, which states that “Women are exposed to a spectrum of alienation based on references to their physicality, from inappropriate and lewd comments, to violence and rape”.

In addition to this, the report also states that black women face bigger challenges than their white counterparts.

“Many black female lawyers noted that they are associated with their white colleagues’ domestic workers, albeit subliminally,” read the report.

Adding to these challenges are the multidimensional roles played by women in society.

”One of the hardest things is being a woman and a mother. Women are often asked what they are doing if they can’t be both,” said Noluthando Moledi, a candidate attorney at Bowmans.

While black female lawyers have a role to play in mentoring young lawyers, Tshidi Malete, who is also a candidate attorney from Bowmans, argues that there needs to be an effort from both parties.

“We can’t expect a senior lawyer to mentor those that are upcoming when we have no idea what she is going through.

“We also need to change the way we define mentoring. Maybe the solution is not sitting down and having a conversation, but taking a young black lawyer to a meeting, so that they have enough experience when they finish their articles,” said Malete.

Commenting on the outcome of the discussion, Tayiba Barnell, a 21-year-old third-year BA law student, said that while the reality is scary, transformation is necessary.

“I believe that one of the areas where we need transformation is the rehabilitation systems in our prisons.  Everyone deserves a second chance but we can’t be having criminals out on the streets reoffending and harming women,” she said.

FEATURED IMAGE: (From left) Malebo Sephodi, Tshidi Malete, Alexandra Fitzgerald, Noluthando Moledi and Adanma Yisa  receive flowers and gifts from the Law Students Council after a discussion on the role of women in the legal sector. Photo: Provided