It is unclear when students will be allowed to return to class.

Academic activities at the University of Zululand (UniZulu) remain suspended following the shooting of a student in a private residence on Sunday, September 15. The shooting of a male student in his residence room, sparked a protest by students at the Kwa-Dlangezwa campus to raise their concerns about safety. The campus was subsequently closed by university authorities on Tuesday, September 17, after the student protesters clashed with police.

In a statement sent to students which Wits Vuvuzela has seen, UniZulu management said, “We have resolved to close the Kwa-Dlangezwa campus in light of the current violent student protests at the campus.” The risk assessment suggests that failure to do so will place the lives of both staff and students in jeopardy. The safety of our staff and students is of paramount importance.”

In the meantime, the university will secure additional security and the assistance of the South African Police Services,” the statement read.

The UniZulu student administration has condemned the suspension of activities, saying in a statement,  “We also note that the continued use of this inconsiderate and inhumane ‘go home’ or ‘until further notice’ strategy is an unconstitutional act that leaves students more vulnerable to crime”. 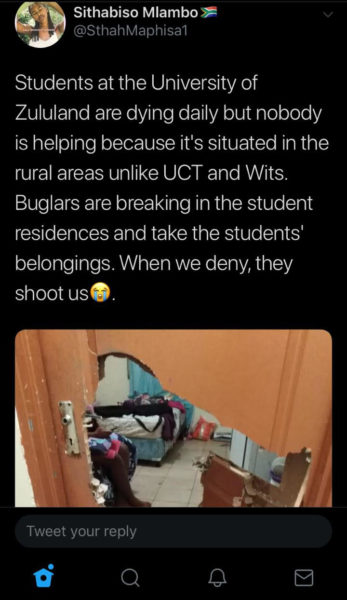 Nomfundo Vilakazi, a first-year student who attended Monday’s march, told Wits Vuvuzela that she was “tired of the thugs coming into their rooms”, and terrorising them.

Vilakazi stays at a different private residence to the one where the shooting took place, located behind the university but said that her residence has also fallen victim to crime. “Earlier this year we have had break-ins where a student was shot, and another was stabbed. We have had multiple meetings with the landlords and no solutions have come out of it,” said Vilakazi.

#sabcnews #sabckzn Situation remains tense at the University of Zululand main campus in KwaDlangezwa area near eMpangeni on the KZN north coast, students have clashed with police. Students are calling on the university to beef up security on and off campus residences. pic.twitter.com/rnkGURqMNO

We need a safer South Africa!

Forget the fictional #UniversiteitVanMsoon, the University of Zululand needs our attention today!

Students must feel safe on campus and everywhere!

“Due to the fact that the shooting took place at a private residence, the university has limited power to ensure the safety of the students who live at private residences” said student administrator Nontobeko Zulu.

Zulu said the UniZulu student administration has asked for intervention from the police, the department of higher education and training, and the necessary stakeholders to ensure that students’ safety is ensured.

A friend of the victim who spoke to Wits Vuvuzela on condition of anonymity said that the suspected thieves are outsiders known as ‘amadabuka’ and have terrorised the private residence on multiple occasions.

“They stole his phone, his laptop, and shot him in the stomach,” the student said.

The fourth-year victim, whose identity is known to Wits Vuvuzela, remains in hospital. “We can confirm that the student is currently in ICU and is in a stable condition,” said Zulu.

Wits Vuvuzela reached out to the management of the University of Zululand, but failed to receive comment.

iDisclose
This story came to me as a tip off from an anonymous source. Using the information at hand I contacted one person who did not wish to be quoted but helped me to verify some aspects of the story. Two other people agreed to speak to me and be quoted. Journalist: Tumi Modiba Peersub 1: Sisanda Mbolekwa Peersub 2: Imaan Moosa Subeditor: Dinesh Balliah

FEATURED IMAGE: University of Zululand students lead a march in awareness of the lack of their safety. Photo: Provided.