Journalist who lied about having cancer dropped from conference

The Wits journalism department has been accused of protecting a former student from the consequences of lying about a serious disease.

A Wits Journalism alumnus who admitted faking a cancer diagnosis has been removed from the speakers’ list for the 2019 African Investigative Journalism Conference (AIJC) due to be held on October 28 to 29.

Roxanne Joseph (28) a former honours student in journalism and media studies at Wits, told colleagues and friends that she had fallen ill with the chronic disease during her fellowship at SECTION27 as a communications officer in Johannesburg from mid-2015 to mid-2016.

The Wits journalism department which organises AIJC has been criticised for allowing Joseph to speak at the event when she has a history of deceit that contradicts the value system of the media.

“It was a mistake to accept the suggestion for her to participate, and we acknowledged that and withdrew her from the programme as soon as we became aware of the depth of feeling on the matter. We are deeply sorry for having underestimated the hurt people affected still feel,” said Franz Kruger, head of the Wits journalism department.

However, Kruger told Wits Vuvuzela that the department would not release a statement about removing Joseph as a speaker at AIJC, saying this was “unnecessary”.

“There are a lot of former students who come through our doors and we don’t comment on all kinds of allegations of that sort. I don’t think it is [our responsibility to set the record straight],” Kruger said.

According to her former colleagues, the then 24-year-old Joseph began to act sluggish at work in 2015 and eventually told them she had cancer. She mimicked the usual symptoms of a cancer patient by shaving her hair to create the illusion of hair loss, used permanent marker to create bags under her eyes and cut her chest to create an incision for the insertion of a central line to dispense the chemotherapy treatment she never had.

After fabricating her illness for nine months and soliciting the sympathy, support and even money from peers and employees, Joseph confessed that it had all been a lie, that she had never been diagnosed with cancer.

“She lied to the organisation on multiple occasions about her health and received a great deal of support from the organisation and from individual staff members,” said Nontsikelelo Mpulo, head of communications at SECTION27.

“She caused particular harm and distress to several staff members. Once confronted with her deceit, she left the organisation,” said Mpulo.

Nomatter Ndebele, a former colleague of Joseph’s at SECTION27 and also a graduate of the Wits Journalism honours programme, criticised the department’s decision to include Joseph as a speaker at the conference in a series of tweets. 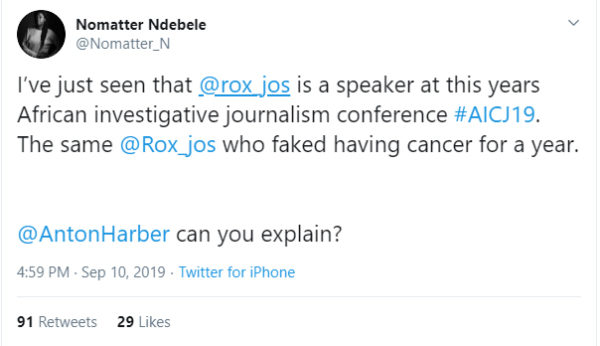 Both @rox_jos and her father are speakers at this conference.@franzkruger– you are an entire ethics lecture, surely this cannot be acceptable?
How can somebody who lied basically about her life for two years, also be an authority on an investigative journalism Confrence. pic.twitter.com/qsPKug02Qv

Let me just get to the depth of lies. @rox_jos woke up one morning and decided she had cancer.She then took our entire office for a ride for an entire year! #
1. She shaved her own hair off.
2. Put permanent marker under her eyes to create ‘bags’ under her eyes.

Ndebele’s thread on Twitter detailed the extent of Joseph’s deceit, arguing that she broke the core ethics of journalism including accountability, transparency and truth-telling.

“Someone who’s speaking at a conference [is] seen as an authority, and my question is: how do you have someone who has blatantly lied about their entire life as an authority in a journalism conference? This person is a liar in a truth-telling space and it’s not okay,” said the 28-year-old Wits Vuvuzela.

“On the one hand, we must be compassionate towards that because she’s sick. But if someone like that is sick you do not enable them to be in an environment where they are going to tell lies,” said Ndebele.

The best part was when @rox_jos created a blog called “what having cancer in my 20’s taught me”
There she wrote “heart wrenching” pieces about living everyday to the fullest as she was so ill.

All of this, and at the end of it all. After confessing to the lie @rox_jos was just silently let go.
Told to go and get help.
Next thing, miss thing has a job where her father Ray Josephs worked.

But at the core of this, is that black pain and trauma is nothing! This girl lied at every point- but her life carries on.
As a journalism entity @Journ_SA how would you condone such. To have her as an actual speaker at a whole conference??

Ndebele, who now works as a journalist for Maverick Citizen, argued that Joseph is being protected by the media industry because her father is the influential investigative journalist Raymond Joseph.

She also said that the senior heads of Wits Journalism, including adjunct professor Anton Harber, are actively sanctioning Joseph’s fabrication by taking the initial decision to have her speak at the conference.  She also described Joseph’s lies as “malicious, deceitful and calculated”.

If people like @rox_jos are going to speak as authority at this conference. Then the whole thing is joke. #AICJ
No respect for any journalism values.
No respect for truth.
Please, don’t play with us.
People have died for truth- and you allow blatant liars to rep you??

The hardest thing to reconcile with is this. That @rox_jos did this deliberately.
And maliciously. She stood in the mirror everyday and didn’t think twice about the lies she was going to tell.
One of my colleagues slept on a hospital floor with her for 3 nights.
And for what?

Harber told Wits Vuvuzela that “Fabrication is not justifiable but mental illness can happen to any of us and we need to figure out how to handle, manage and deal with that in balance with compassion with those who have been affected by it and hurt by it.

“There are a lot of people hurt in this terrible incident so I would be very cautious of simple ethical points of view,” he said.

On why the journalism department has remained silent and not issued a statement on its decision to remove Joseph’s name from AIJC, Harber said removing her from the list of speakers was enough.

“The statement we’ve made by withdrawing her from the speaker list says everything. Putting her there was a misjudgement in the first place, we corrected it as quickly as we could,” he said.

Ricky Stoch, a visual communication master’s student at the Royal College of Art in London and former friend of Joseph’s told Wits Vuvuzela that Joseph’s lies and manipulation have left her traumatised and affected her capacity to trust others.

“I sought therapy in 2016 when Roxanne’s ‘condition’ was declared terminal. I needed help with losing my friend…when I found out that she had faked the whole thing, I was traumatised, confused, hurt, shocked, incredulous, angry and at a loss,” said Stoch.

Ndebele suffered a nervous breakdown as a direct result of her involvement with Joseph and said she may never recover from the psychological trauma.

“I was hospitalised for about three weeks. I’m still in ongoing therapy. I didn’t work for two months because I was so traumatised that I could not work. But also, it’s made me double-take my own compassion,” she said.

Joseph, who now works as an associate journalist at Oxpeckers Investigative Environmental Journalism, admitted she lied about having cancer and expressed regret at the pain and trauma she caused her friends, family and colleagues.

“I respect their right to tell their stories and while I will continue to give them space to feel anger, hurt and disdain, I would like to express my deep remorse for what I did to them,” wrote Joseph in an email to Wits Vuvuzela.

“I was diagnosed with a serious mental illness in 2016 and while I have never tried to excuse what I did, I now understand that I should have taken responsibility before any of this happened to receive the proper psychiatric treatment that I obviously needed,” she said.

Joseph told Wits Vuvuzela that she cannot fully recollect the extent of her fabrication or why she made certain decisions because of her mental illness and the incorrect medication she was taking.

“I respect the decision to remove my name from the list of speakers at AIJC, and fully agreed to this with the organiser,” she said.

“I am extremely remorseful about the way I dealt with this. Going forward, I will take responsibility for my actions, continue to show remorse and work harder than anybody else, to prove my place in this industry.”

Joseph is scheduled to speak at the 11th Global Investigative Journalism Conference (#gijc2019) to be held in Hamburg, Germany on September 26 – 29, despite concerns raised as to whether or not she should continue to practise journalism without proof of her rehabilitation. Harber is also listed as a speaker at the same conference.