Wits University moves leans towards the greener side with better waste usage and management.

On Friday September 20 South Africa was one of more than 150 countries that participated in the global climate strike, inspired by 16-year-old Swedish activist Greta Thunberg, with the aim to create awareness around the issue of global warming and its impact on whole ecosystems.

According to the World Wide Fund for Nature almost all plastics contribute to the emission of greenhouse gasses, which trap heat from escaping the earth’s atmosphere and contribute to global warming. Single-use plastic, or plastic that is used once and then disposed of, has been notorious for its adverse impact on the environment as it cannot biodegrade nor be recycled for other uses. The WWF says that 77% of litter on South African beaches consists of single-use plastic including straws, bottles and polystyrene packaging. 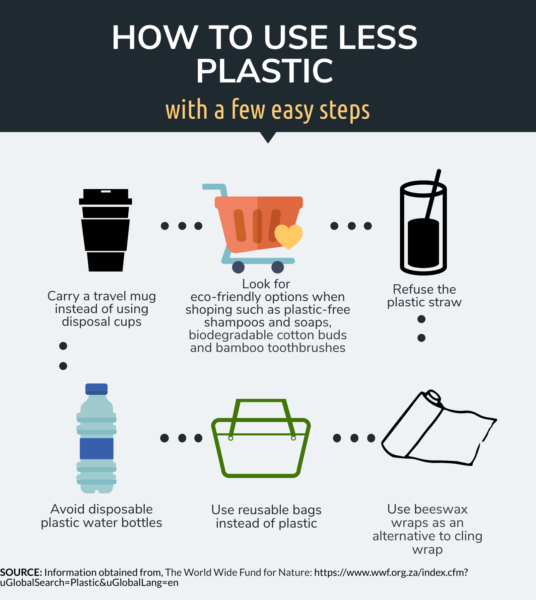 Dr Precious Biyela, the only formally qualified environmental engineer in the School of Civil and Environmental Engineering at Wits, says the only way to tackle the problem is to move towards biodegradable materials, which “can be broken down by microorganisms such as algae, bacteria, and fungi”.

Corn, peels, starch and plants are some of the substances that can be used to make biodegradable products.

Director of Services at Wits, Israel Mogomotsi, said that since April 10, “The dining hall catering unit instructed service providers to remove all polystyrene containers and replace them with biodegradable containers.”

“We are enforcing sustainability initiatives as part of the specification and agreements before appointing new companies. This is applicable for all service providers doing business on campus,” said Mogomotsi.

Wits now requires any future tender applications for dining hall catering to provide proof of compliance with the university’s  environmental sustainability initiatives and requirements. These requirements include plans to reduce packaging as well as what  biodegradable measures are already in place in the business.

An outline of a service’s biodegradable consumption is also required in the request for information for food-related retail tenders. While there is no specific mention that using biodegradable materials is a requirement, this aspect will be used to assess the suitability of the service provider.

Eateries, Theo’s and Olives and Plates have been particularly active in this transition. Other than starting to use biodegradable containers and straws, they have also included wooden cutlery as an alternative to plastic.

Rita Berdanis, the owner of Zesti Lemonz, said, “We always wanted to do this, but the pricing always set us back. Since the university has implemented this rule, we are happy to do this.” 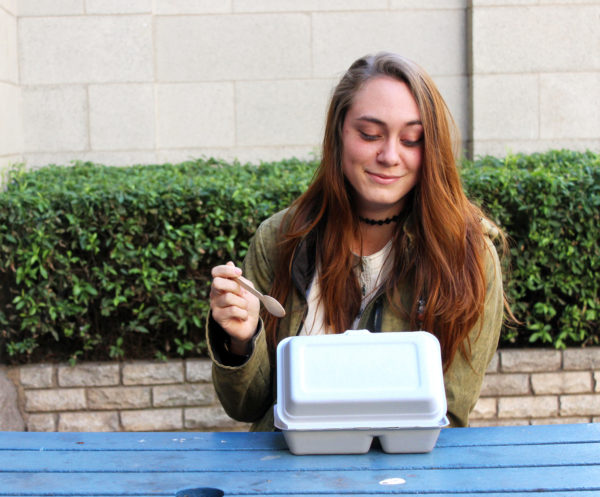 A student outside Theo’s makes use of the biodegradable containers and wooden cutlery that has been implemented to replace single-use plastic packaging. Photo: Ortal Hadad

The university did not subsidise the increased cost of going green and for Berdanis and others, this is one of the main challenges.

“To give you an idea, a container that cost around 20c before, now costs over R3,” she said. “We changed some packaging in order to keep costs down.”

Olives and Plates project manager and spokesperson, Andre Fry said that they “have tried to absorb as much of the additional costs as possible but unfortunately some products had to be re-costed and the prices increased.”

He told Wits Vuvuzela that some recipes were changed to keep prices lower but that this was done without compromising quality.

Both Berdanis and Fry emphasised that despite costs, they still believe that using biodegradable materials is the way forward.

“Although there are existing programmes to address the situation, I do think it would be better if Wits could try to subsidise some of the additional cost,” said Krinsky.

Whilst the biodegradable shift is important, effective disposal needs to be executed correctly as well.

Wits is currently in a process of re-initiating recycling, said Thivhilaeli Steven Mpfumba, waste controller at the Wits Services Grounds and Waste department.

This comes after Wits ended its waste management contract with Oricol ES in June, 2019.

Wits will now insource its waste management with the help of Budget Waste for recycling general waste, Averda which specialises in hazardous waste and Rothe Plantscapers for garden waste. 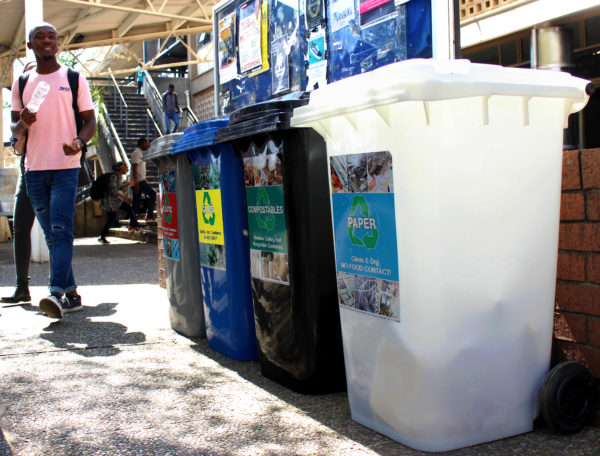 The new colour coded bins, which will be placed around campuses throughout August, will separate waste for more environmentally effective disposal. Photo: Ortal Hadad

Both the waste management and the biodegradable initiative fall under the university’s implementation of green initiatives in its institutional scorecard which refers to objectives set for each department.

Over the years the university has rolled various interventions, such as the use of solar energy as well as sustainable resource campaigns to reduce its carbon footprint, said Mogomotsi.

Although Wits has gone greener in some ways, Inala chairperson Krinsky said a lot more still needs to be done.

“It is essential for universities to be thought leaders in sustainability and environmental responsibility, exposing students to environmental thinking,” said the BSc student.