The Soweto Gold Brewery, also known as the Beer Garden or Ubuntu Kraal Brewery is often referred to as one of Soweto’s jewels. Situated in Orlando West, the brewery also has a restaurant which specialises in traditional foods. An expedition to this beer haven was needed on an unusually hot August afternoon.

The street was surprisingly quiet but later I learned that the restaurant receives most of its traffic in the evening and during the day it is only tourists who frequent the place. The brewery/restaurant is located in a compound with thatch-like houses.  It indeed embodies a kraal and my excitement grew with every step I took towards tasting one of South Africa’s first black-owned lager and craft beers.

A pioneer. A visionary.

“Ndumiso’s passion, ingenuity and love for beer is well known in the industry, and we can proudly say, he is the founder of the Soweto Brewing Company, and Soweto Gold – a superior golden lager.”

A charming gentleman, Mandla Magangane, 29, met me by the door of the rustic restaurant that had mismatched outdoor tables, some white and some different shades of brown. I thought the set up was telling that we were in a township. The ‘walls’ , which were adorned with images of anti-apartheid activists, legendary musicians and talented sports icons, were weathered down corrugated iron with a big sign that read “Soweto Brewing Company”.

Magangane, who is the main brewer, beautifully told the story of the inception of the Soweto Gold lager and the Ubuntu Kraal restaurant as he showed me around.

“People like to think that Soweto Gold and Ubuntu Kraal are synonymous. When Ndumiso Madlala had the idea of making his own beer he approached the owner of Ubuntu Kraal, so he could have his brewery on the premises. This made good business sense because tourists would come taste the beer and end up staying for food, or vice versa,” he said.

Magangane further went on to say that the Soweto Gold lager, although still the pride and joy of Soweto, is not owned by Madlala anymore.

“One would call it a subsidiary of Heineken as it was bought out in 2017. I would say Ndumiso made the right decision because Heineken is a big competitor and if they [Heineken] played a dirty game they could’ve pushed us out of the market completely,” said the brewer.

Soweto Gold not only has the lager, it also brews craft beers that fit perfectly into the context and story of South Africa

As you walk into the brewery you are met with a pungent smell, which I later learned was from malt. The design of the foyer is brown with yellow undertones and has huge writing on the wall which reads, “Soweto. Where dreams are born. Where dreams are made.”

The brewery is not very big as it only brews the craft beers with “flavours which were designed to be lighter and tastier to cater for those who do not enjoy the raw beer taste. We have the cherry, apple, gogo’s ginger ‘gemmer’ and the coffee infusion,” said the young brewer.

As a person with a particular affinity to beer after having been introduced to Stellenbrau craft beer during my undergraduate years, I quite enjoyed the Soweto Gold craft beers. The flavours were experimental and often reminiscent of something else. A distant memory. The cherry tasted like a lollipop and the apple not only tasted like appletiser, but also like a warm out- of-the-oven apple crumble. 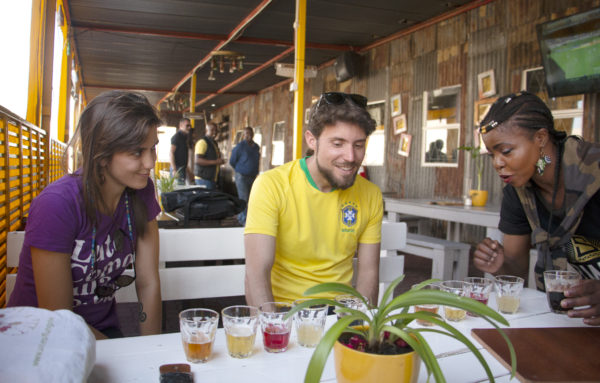 A tourist destination of choice

Both locals and tourists embrace Ubuntu Kraal Brewery for its authenticity

A couple joined us in the tasting room with their tour guide, Sibusiso Mhlanga, 38. Beatriz Barros, 26, and her boyfriend Tito Ribeiro, 30, from Brazil said they had tasted the Soweto Gold lager the night before and were keen to visit the brewery.

“I have heard that South Africa makes some of the best beer in the world so I told my girlfriend we should visit to see the Kruger National Park but deep down I knew I wanted the beer,” said Ribeiro.

“You tricked me! But I won’t lie, it was a bit suspicious that we came to a brewery on the morning of our second day in the country,” said the now-laughing Barros.

On the tour of the brewery Magangane explained the beer-making process.

“It takes about eight hours to complete one keg of beer and then we still need to let it sit and ferment. It is a beautiful process,” he said, seemingly proud of himself.

After the beer tour I decided to stay and eat at the restaurant which offers braai meat as a main and other foods such as samp and beans, pap, dombolo (dumpling) and chips as sides. The food was great and for me, a lazy res student, I was reminded of home. The samp was even better than my mother’s!