The Moot area, north of Pretoria central, is one of the oldest areas in the city, where the leafy streets double as an antique route, home to some of the location’s lost treasures.

Stray cats, broken mannequins and children’s toys. No, this isn’t the opening scene to an Alfred Hitchcock movie, but with the area’s rich history I wouldn’t be surprised if a lost soul or two walked Antique Route 6 in the north of Pretoria. Each shop, separated by a few kilometres, but worlds apart in appearance serves as a haven to the local community and it Moot cats.

Bellbottoms
“This is not an antique shop. This is Bellbottoms, the experience.”

Bellbottoms owner, Didi Bairos, made it his mission to create a travel pasttime in the Moot area. Taking the independent antique stores from Parker to Pierneef Street, he put a name to what was already there and constructed Antique Route 6.

Established in 1999, Bellbottoms is the oldest shop on the route. But Bairos assures me his shop is different from the others.

The air in the double-storey ‘experience’, as Bairos dubs Bellbottoms, is filled with everything from gospel to Black Sabbath, he explains with a quick rendition of The King’s Messengers. After this introduction it comes as no surprise that he boasts a room dedicated to old records, sorted in alphabetical order according to genre.

Bairos takes what seems to be his usual position behind the till, beer in tow, chatting to an old friend. I’m told this is the traditional Saturday scene on 1051 Pierneef Street, only there’s usually about four of his friends hanging around.

When Bairos isn’t behind the counter he is restoring old furniture in front of the store. This is part of a community project with another store on the route, Retro Rabbit. The project is aimed at helping some of the poorer community members make and sell furniture. 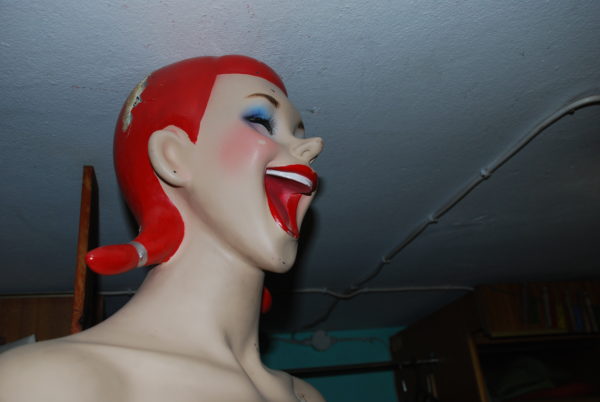 Labyrinth House
“Without the film industry I wouldn’t have survived.”

Less than two kilometres down Pierneef Street, Labyrinth House is probably the last place you would want to be in the event of an earthquake. The layout is cluttered with cabinets on either side of the room, struggling to hold its contents, creating a small passage for customers to squeeze through.

Owner David van Heerden explains that only the untrained eye will see chaos. He knows there is order here, somewhere.

Labyrinth House is Van Heerden’s self-proclaimed ‘Noah’s Ark of stuff’, an ode to the film industry, stocking it with the little details needed to recreate a bygone era in the 21st century. “There were two guys who needed false teeth for a Viagra advert … I got them from some old people I know. I like old people,” he says.

A collector since childhood, Van Heerden describes his workplace as a style library of history and a physical reference to every era.

“After 20 years a cycle tends to repeat itself, whether it be design of objects or clothing … The next generation comes, and they have a certain sentiment to that design from memory or contact with people they were fond of”, he says.

I can’t help but think Van Heerden’s store is somehow his mind personified, where hoarding turns into sustenance and a love for collecting is juxtaposed against an inability to create order. His personality translates into his store, as it should.

Three and a half pairs of false teeth which Van Heerden rents out. Photo: Gemma Gatticchi

Retro Rabbit
“Customers say they can feel him, apparently it’s a him.”

Owner of Retro Rabbit, Elsa Polydorou, brings an air of creativity to the route. The exterior of her shop is strewn with an assortment of greenery flourishing between naked mannequins. A variety of mud-stained wedding dresses hang along the perimeter of the patio. With a setup like this you would expect it to ward off any ill intent, but this isn’t the case.

I wait for her while a desperate blonde customer tries unsuccessfully to negotiate a good price for an item. I wonder if strangers usually approach the shop owners to sell their belongings, but Polydorou explains that often addicts peddle stolen goods as their own in an attempt to support their habit.

“I suspect that lady is a drug addict, so we always have to be careful,” she says. 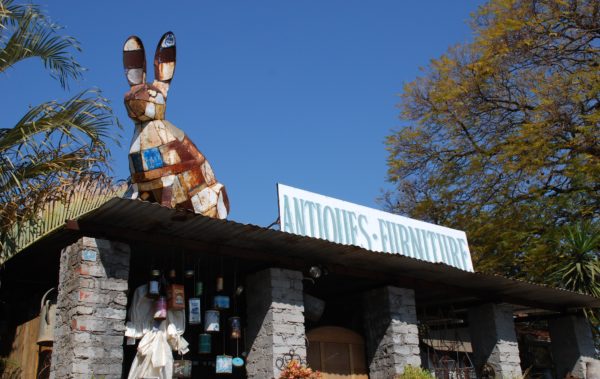 Swiftly changing the topic, she casually asks if I’ve met the ghost in their back room. She goes on to explain how, before buying the house, it was occupied by homeless people all of whom refused to set foot in the back room.

Polydorou says, “When we bought the house that back room was locked. We had to break down the door to get into it, but he has never bothered me. Besides, every antique shop must have a ghost.”

The route has a collection of odd pieces that double as a livelihood for these owners in a long-forgotten part of Pretoria. Whether you choose to walk the route or drive through the Jacaranda-lined avenues, you might find a few treasures of your own, in the form of feline friends and perhaps a lost soul or two.