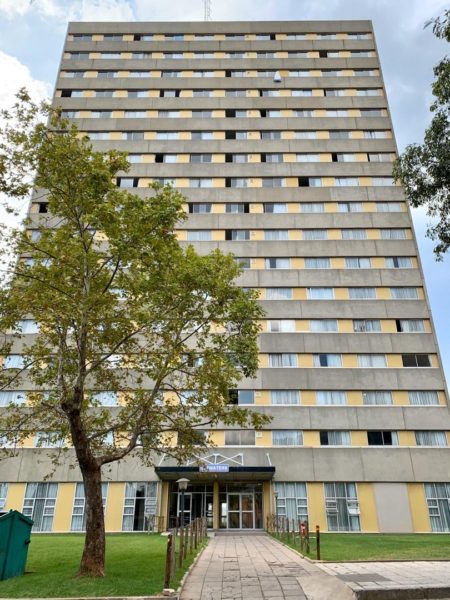 Witswaters residence will house Wits students that have been squatting in libraries and labs until the end of June. Photo: Vetiwe Mamba.

As many as 36 homeless students were expected to have been granted temporary accommodation at Witswaters residence in Parktown by the end of Friday, March 13.

SRC president Thuto Gabaphethe said, “Yesterday (Thursday) there was a group that was moved in and today we shall be finalising that process… It is confirmed that by the end of today (Friday) all students will have moved in.”

Although, according to deputy SRC president Rebecca Mahaule, the SRC had requested that the building be made available for the entire year, the rooms will only be available until June 30. That is because the rooms are for the use of medical students who are out on rotation, who will be returning to work at Charlotte Maxeke Hospital from July 1.

“Upon the request of the SRC, the [Gauteng] department of health made the building available to house Wits students needing accommodation assistance on a temporary basis until the end of June 2020,” the dean of students, Jerome September, told Wits Vuvuzela. “However, this is not a Wits residence, it will not be set up as such, as it is a temporary relief for students currently in need,” he added.

Sizakele Davani, a 25-year-old master’s student in politics who has been without accommodation since she arrived from Cape Town on January 22, is hopeful that the SRC will help her.

“This psychologically affects me because it’s difficult to focus in lectures and I’m still sleeping in labs. I am on the [Hardship Fund] list but this isn’t helping at all,” she told Wits Vuvuzela. She said she had applied for National Research Foundation funding last year, but her application was “still pending”.

Mahaule said rooms at the residence would be allocated to students who had applied for the Hardship Fund and “squatters who have been identified by the Wits Protection Services in libraries and computer labs”.

FEATURED IMAGE: The Gauteng department of health has made the Witswaters building available to homeless Witsies. Photo: Vetiwe Mamba.