As told to: Andie Steele-Smith on working with gang members in Cape Town during lockdown

Andie Steele-Smith works in underprivileged areas in Cape Town and is offering hygiene supplies and food to the residents living there.

Andie Steele-Smith (52) is part of essential services during the Covid-19 pandemic. He advocates for dignity and hope in Cape Town’s most underprivileged communities by volunteering support where needed by collecting and distributing hygiene products, food, and offering emotional support and prayer.

Steele-Smith currently focuses his work in Manenberg and Fisantekraal in the Western Cape province, spending 5-6 hours a day there, however during lockdown this has more than doubled. He does this with his two unofficially adopted twins, Franklin and Junior Geduld (19) who are from Fisantekraal. These settlements are approximately 40 minutes distance from one another.

The Australian born Steele-Smith has done religious ministry to gang members and the homeless in the United States and United Kingdom before moving to South Africa in 2015, which he says God called him to do. In 2016, Steele-Smith was involved in a young men’s Bible study in Fisantekraal and became well known in the community. He realised that many of the boys lacked a consistent father figure in their lives, this ultimately drew him to being involved in ministering to gang members in Manenberg, where many of the gangs operate.

During the Covid-19 lockdown period, he has witnessed notorious gangs in Fisantekraal and Manenberg, such as the Americans, Jesters and Clever Kidz pull together to distribute soap and essential goods to their communities. In spite of the looting that was reported in Manenberg and Mitchells Plain on EWN, earlier this week,  the community is trying to do better.

This was a “pinch-me” moment for Steele-Smith and he believes that although this response during Covid-19 may not end gang violence, it could help these young men to see themselves based on what they can positively contribute to society.

As told to Leah Wilson

We had to do something, we went and bought about R50 000 worth of soap bars, initially.  We started distributing it in Fisantekraal and Manenberg.

As we got closer to lockdown, I realised that in order to get that soap distributed, I was going to need extra help. I went to some of the gang leaders and said ,“Hey boys, please will you help us here”.

So we started to have gangsters who were helping each other, in opposing territories, to distribute soap to parts of the community. That seemed to be pretty cool to me, to them it seemed to be revolutionary.

The day the lockdown started, the gang leaders called me and said, “Andie, we really need food and the whole community needs it, worse than we do, is there any chance you could do something?” And so I literally jumped in the truck. I went to Jumbo Cash and Carry. We bought about R30 000 worth of food and started distributing that.

The biggest challenge has been trying to, as quickly as possible, distribute as much soap, sanitiser and food into pretty hostile and difficult environments whilst trying to observe social distancing. Trying to keep people away from us and away from each other, is quite difficult too.

We’ve been able to purchase the food that we need in large quantities and so we haven’t run out yet, but we will do so soon. Manenberg at the moment is dire, it is absolutely desperate. The desperation is just for food, as food scarcity is such a big issue, at the moment. It’s almost frightening.

People are experiencing that, when they are hungry, everything else seems pretty terrible. They feel terrible about it. They feel unloved, they feel uncared for, they feel like the world owes them a living. You know, when you’re that poor, it probably does.

I’m good friends with the Hillsong Africa Fund and they said “Hey listen, we love what you’re doing, can we get behind it, can we help to raise some funds and help you do this in Manenberg and Fisantekraal.”

We don’t have any formal partnership as such. We tend to try and build relationships with community leaders. It’s not always the person with the ANC shirt or DA shirt, although sometimes, it is. Usually it’s somebody that we just see as a really good and trustworthy figure in that community.

You know, I’m a white privileged kid from Australia, who has lived all around the world and had privilege all his life. What do I know about hardship? Nothing. So it just would be totally illogical for me to come in and start telling people what to do.

The approach we’re taking is to ask questions and then say “Hey, ok cool, here’s something that together, we might be able to work on to help resolve a challenge that you guys have identified.” 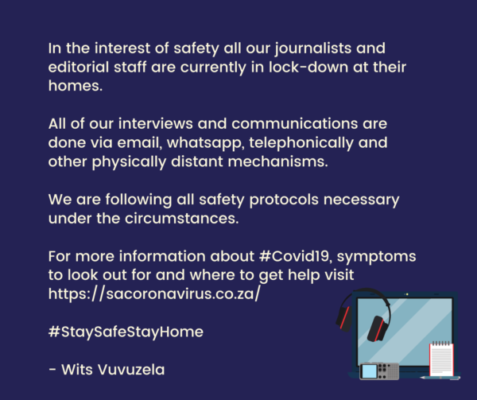 In terms of the goal in these communities, fundamentally, it’s to point people to Jesus. Secondly it’s to give these young guys and girls, particularly young guys, an understanding of the Father’s heart for them. If they haven’t had a physical father, or a good father, that can be a real challenge. The rest of it varies from place to place, but ultimately our goal is to uplift.

Feeding people, in a sense, is the unintended consequence of what we’re doing here in Manenberg over the lockdown period.The intended consequence is delivering dignity and hope to people. It’s about giving people, in terms of the guys who are helping, an understanding of the value that they can create and contribute in society leading to a different sense of self-worth.

FEATURED IMAGE: Left: Steele-Smith with Kim Cassel from Mitchells Plain, who runs a youth dance studio, and police officer Dave on a food handout to approximately 280 houses in ‘the tuck’, Strandfontein, Wednesday 15 April. Right: Sansime Hassan, leader of the Cleverkidz, handing out parcels in Manenberg on 15 April, as part of a drive to hand out several thousand eggs and food. Photos: Courtesy Andie Steele-Smith.