The City’s leadership has vowed to ensure that not only the precinct of Braamfontein, but also surrounding areas such as Parktown, are cleared of criminality.

As of Monday, February 15, the Johannesburg ​​​Metropolitan Police Department​ (JMPD) has permanently deployed 70 police officers in the Braamfontein area, as part of a City of Johannesburg (CoJ) plan to station officers in every ward to combat the security and crime challenges faced by residents of the city.

“At the moment we are using our command post bus as a satellite station temporarily, until we can find space to have a permanent station. What people can do on the bus at the moment is lodge complaints, incidents and report accidents,” Fihla said. In addition to the JMPD bus there are various police vehicles patrolling Braam.

The crime prevention plan was launched by executive mayor Geoff Makhubo at the Nelson Mandela Bridge. “The city is on the road to greater heights that cannot be undermined by criminality. It is a battle that we must win, and it is a battle that we will win,” Makhubo said.

On the significance of the bridge, the mayor said “It is a link between the dreams and hopes of many workers and young people and students especially those who come from historically disadvantaged backgrounds.

“Unless we work towards increasing the safety of our people in Braamfontein and surrounds, we risk the possibility of parents refusing to send their children to institutions around the area for fear of them falling victim to crime.”

The launch followed several meetings initiated by the Wits SRC with the CoJ speaker of council Nonceba Molwele since November 2020.

“Towards the end of [2020] a lot of people around Braam were losing their cellphones and this was a problem that had been going on for some time, but when I came into office the first thing I wanted to do was fight crime in Braamfontein, I wanted students to feel safe again,” SRC president Mpendulo Mfeka told Wits Vuvuzela.

“Gender Based Violence and crime is very rife in the Braamfontein area. Starting today we are all here to witness that going into the rest of the year safety and crime prevention will be [a] reality,” Mfeka said at the launch.

While accepting the deployment of numerous police vehicles in different locations as an interim solution, the ultimate plan of the Wits SRC is for the CoJ to open a permanent police station in Braamfontein. 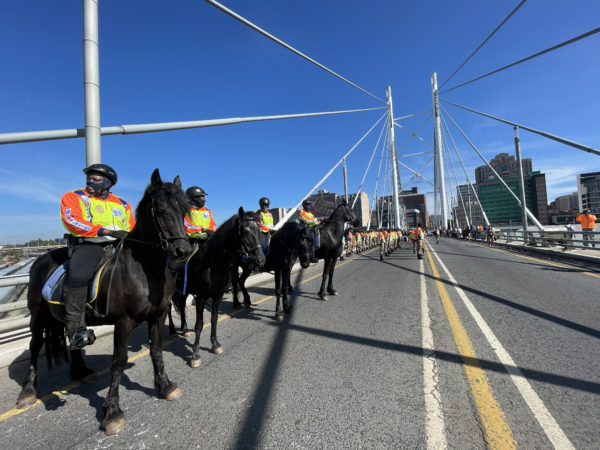 JMPD officers on the Nelson Mandela Bridge during the launch of the Braamfontein crime prevention plan. Photo: Khuleko Siwele

Ronaldo Matenhe, a vendor who is renting in a Braamfontein supermarket told Wits Vuvuzela that it was a relief to have the JMPD on the streets of Braam.

“The store was robbed at gunpoint in October [2020]. The robber got away with money and cellphones from customers and store workers. Now that the JMPD is here I feel safer. It feels good knowing that the cops are here to protect us,” said Matenhe.

Mayor Makhubo said the JMPD will also aim to keep areas surrounding Braamfontein safe as part of a bigger mission. “The university precinct must, however, not be an island of safety and security in a sea of lawlessness around it, if it were we’d only be displacing the problem we are addressing today. [Crime] would move from Braamfontein to Parktown.”

He added that all citizens should work with the JMPD and other law enforcement agencies to fight crime on Mandela Bridge, Braamfontein and the inner city.

Quoting the late Nelson Mandela, Molwele said, “Safety and security don’t just happen, they are the result of collective consensus and public investment. We owe our children, the most vulnerable citizens in society, a life free of violence and fear.”

According to Fihla, the JMPD officers currently deployed at the Braamfontein satellite station will work two shifts: 6am to 6pm and 6pm to 6am.

FEATURED IMAGE: The JMPD command post bus which is being used as a temporary station, located in front of Jorissen Place in Braamfontein. Photo: Khuleko Siwele