Wits BA digital arts honours students are collaborating to create their own comic stories rooted in the artistic and storytelling style of Afromanga.

Afromanga is a comic genre that combines the aesthetic and format traits of Japanese manga comics with unique African styles of storytelling, themes and characters. The genre has gained significant attention across Africa since 2015, following the creation of Razor-Man by Zimbabwean-based artist, Bill Masuku.

The students are required to create Afromanga-style comics as part of the honours portfolio for their comic research project.

The project is headed by Wits digital arts lecturer Ray Whitcher, a published comic book artist who is currently studying towards a PhD in comics in the South African context.

“The students work in pairs that consist of a writer, or letterer, and an artist. I did this intentionally to simulate a typical working environment for comic-making, but also one that affords writers [the opportunity] to truly experiment with and try new styles and approaches, while the artists are able to select genres that appeal most to them,” says Whitcher.

He adds that the creative and theoretical context of the research project is established through teaching the students about the theory of Intergenre, which describes a narrative work containing mixed elements of multiple genres. Students then apply this theory through the creation of several chapters of Afromanga comic titles that span several genres.

Eric Gardiner, one of the digital arts students, says that his team’s comic is combining themes relevant to an Africa context such as the effects of corporate monopolies, justice and friendships across borders, and giving the overall story a science fiction twist by adding in the theme of time travel. 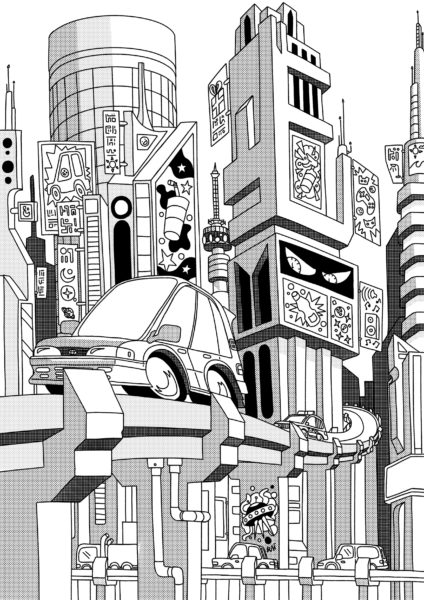 Concept art drawn by Eric Gardiner for the Afromanaga comic that his digital arts team is creating. It shows elements of the futuristic South Africa they are creating in their story. Photo: Provided.

“Additionally, we aim to construct a world, in a future South Africa, where race differences and cultural diversity are an unprejudiced social norm,” adds Gardiner.

Chervalle Dermit, another digital arts student, says that one of the teams that she is an artist for aims to create characters in their comic that are representative of various South African cultures and ethnicities, as well as the LGBTQ+ community.

Whitcher believes that it is important for African comic book creators to embrace their African heritage and to incorporate it into their written and visual storytelling.

“We have such a rich abundance of narratives and visuals all around us, so instead of copying [popular Japanese manga], I task my students to remediate and use the successful elements of things like manga, but to contextualise it in their own way,” says Whitcher.

He further says that there are plans to get a collection of the class’s Afromanga comic chapters published once they are completed.