Nine–time Comrades marathon winner and Wits alumnus, Bruce Fordyce, has published a new book aimed at beginners in the sport of running.  Winged Messenger was launched on March, 24, 2021 on a webinar hosted by Wits Sports and Health.

“I focused on beginners because I have written two other Comrades books for faster runners and I knew I would have a large and keen readership,”  Fordyce said. 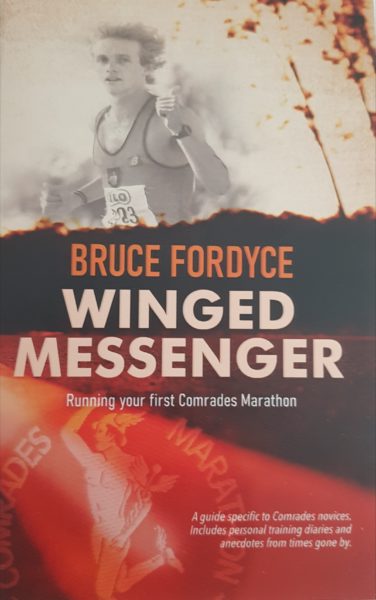 The book title is drawn from the logo on the Comrades marathon medal, which depicts the Greek God Hermes. Hermes was the God of the roads and was known as the ‘winged messenger’ of the Greek Gods.  “Runners who finish Comrades and earn the medal are therefore winged messengers,” says Fordyce.

Training for the world renowned 90km marathon is an everyday thing, especially in the second part of the year, according to Fordyce. He believes that April is the most important training month before Comrades which normally takes place in June annually.

“It is important to be well rested and strong before Comrades. So, I recommended resting for three days before the race,” says Fordyce. Fordyce says he does not believe in getting the latest and greatest in running shoes. “Rather have the shoe that is most comfortable for you, even if it’s an old model,” says Fordyce.

Some runners have superstitions or rituals that they follow ahead of the race. Fordyce recalls that, Allan Rob (four-time winner of the Comrades) for instance, always wore his Liverpool FC red socks. Fordyce says that he used to follow a training dieting ritual before Comrades races.

Fordyce first ran around the Wits rugby fields in June 1975 to kick–start his journey to the Comrades a year later. Fordyce finished 43rd in his first race in a time of six hours and 45 seconds. He no longer participates in the Comrades.

Fordyce says that looking back he would change very little from his first race, “Except perhaps I would enjoy and take the experience in more, and not push myself too hard,” he says.