Dr Keneiloe Molopyane has been given a postdoctoral grant position by Wits University at their Centre for Exploration of the Deep Human Journey.

The Cradle of Humankind World Heritage Site has lost a curator, as Dr Keneiloe Molopyane steps down to begin the next step in her academic career. This postdoctoral grant position will see her re-investigating a previous expedition site.

In an announcement released by the team at Maropeng about her expedition, Molopyane says this opportunity came from her current fieldwork involvement at the UW 105 site, which is a new underground fossil site, discovered in September 2020 at the Cradle of Humankind. Molopyane says she believes that this is where her potential to be principal investigator was seen and earned her the opportunity.

“I want to keep the [details of the] site under wraps for a little while longer, but a world-renowned palaeoanthropologist was known for parading two hominin teeth… at the site,” she hints. Molopyane speculates that the re-exploration will unearth the skull to which the teeth can be matched.

Molopyane says that because she is keeping mum about the specific site, she has been named “the queen of teases by World of Palaeoanthropology, and [she is] digging wearing that crown.”

Watching The Adventures of TinTin with her mother on Saturday mornings in her childhood, was Molopyane‘s initial introduction and inspiration for pursuing a career in archaeology. Her passion for the field has only grown over time and is “engraved in [her] DNA,” she says. “I breathe exploration,” she adds.

This passion comes through as Molopyane speaks about what she is hoping to achieve as a principal investigator. “I just want to be an explorer. That’s all I want… my highbrow dream is the discovery of something big,” she says. Molopyane adds that being a curator at the Cradle, taught her about being an explorer. 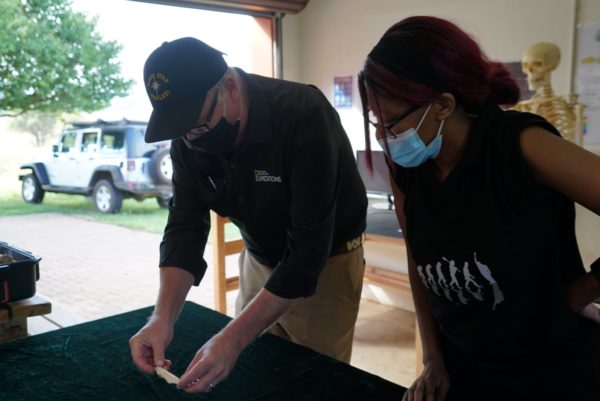 “The office life isn’t for everyone, and it definitely wasn’t for me,” she says. “I will always have an office, but it’s not where you’ll find me.”

Dr Bonita De Klerk, the laboratory manager at Wits Universities Evolutionary Studies Institute, has worked with Molopyane since she joined the exploration and field teams working at the Rising Star cave system at the Cradle of Humankind.

“She is very dedicated to her work and is hands-on with all aspects of excavations and research,” says De Klerk.  “Dr Molopyane has a quiet confidence, she is very dynamic and her enthusiasm for discoveries being made is catching.”

De Klerk adds that she admires Molopyanes approach to work and life, “She focuses on balance which is something [that] is often forgotten.”

Despite all her achievements, at the end of the day  Molopyane wants people to know that she “is just a girl from Benoni.”

FEATURED IMAGE: Dr Keneiloe Molopyane in a cave site at the Cradle of Humankind. Photo: Provided