Wits final year law students have started applying their theoretical knowledge to real life cases by consulting with members of the public at the Wits Law Clinic since Tuesday, April 6, 2021. This comes after a few adaptations were made by the Wits school of law to allow its students to fulfil the mandatory Practical Legal Studies course (also known as the PLS flight) through the clinic.

The clinic assists the public with legal advice and representation on a pro bono basis. It is staffed by practitioners and students. “The clinic is an amalgamation of [the] classroom and practice,” said director of the clinic, Daven Dass.

Alicia Raymond, the PLS course coordinator, says that students are allocated to cases across six specialised units: general, family, labour, refugee, property and delict. The units deal with civil cases, guardianship and divorce, employment matters, undocumented persons, property matters and personal injury claims, respectively. The units are managed by supervisors who are admitted attorneys and lecturers in the school of law. Dass says that students are also guided by the advice of candidate attorneys who then direct students to draft and file the relevant documents. Raymond says that the clinic admitted 405 final year students this year. 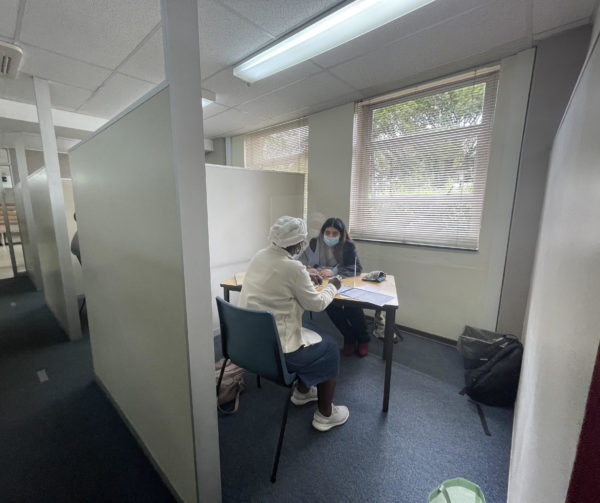 Aleena Mughal, (right), consulting with her client in the newly-built booths at the Wits Law Clinic. Photo: Nondumiso Lehutso.

Commenting on her  consultation experience, Lilitha Nxiweni, a final year student, said that she was saddened that she could not assist a client but that “it comes with the job.” Another student who asked to remain anonymous, said that she was shocked by the backlog in cases since she had taken up a case that was opened at the clinic in 2017.

While acknowledging that the facility’s clinicians are “exceptionally stretched,” Dass remains convinced that the course improves student’s consultation skills and ultimately prepares them for the real work environment. He adds that the success rate of the PLS flight is not based on the number of cases won, but on professional advice given to clients.