Wits University health students have been deployed to other hospitals in Johannesburg.

The Wits faculty of health sciences has suspended all clinical rotations at the Charlotte Maxeke Johannesburg Academic hospital (CMJAH), following a devastating fire at the hospital on Friday, April 16. Students who were placed at CMJAH have been deployed to other hospitals across Gauteng as the hospital remains shut for the week.

The health sciences campus was shut down on Saturday, April 17, as a precautionary measure given its close proximity to CMJAH in Parktown. The campus underwent an on-site occupational health and safety assessment on Monday morning, April 19. A statement released by the faculty on Monday said that some parts of the campus were cleared for reopening later in the day. The campus is expected be operational by Tuesday, April 19. According to the statement, certain departments within the school of clinical medicine, the school of oral health sciences and the nursing department located within the hospital will remain closed and is to undergo further assessment on Wednesday, April 21, 2021.

Synock Matobako, spokesperson for Gauteng Emergency Services (EMS) tells Wits Vuvuzela that the fire ignited at the CMJAH dispensary storage space, which stores all dry surgical and medical items but the exact cause of the fire is still under investigation. The fire, according to Matobako, had spread beyond its origin point. The firefighters managed to contain the initial flame to the storage space, but according to Eyewitness News the fire re-ignited 12 hours later. During the early hours of Saturday morning, April 17,  a level below the hospital collapsed, Matobako tells Wits Vuvuzela. Firefighters were evacuated as per safety precautions and continued to fight the fire from outside building.  No casualties have been reported. 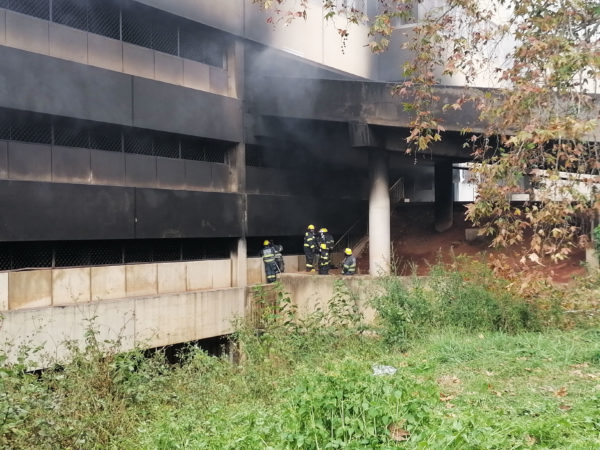 Tshwane EMS and Ekurhuleni EMS were deployed to the scene to assist with the evacuation of patients. Gauteng MEC of health, Nomathemba Mokgethi, told the media on the day of the fire that all patients were being evacuated and transferred to other hospitals. All medical personnel were to be re-assigned to these hospitals to ensure that services are still operational.  These include Thelle Mogarane Regional Hospital in Vosloorus and Tambo Memorial Hospital in Boksburg where the Wits health sciences students have been sent to.

The public has been asked to seek medical attention at other hospitals. All family members of CMJAH patients may contact the Gauteng provincial call centre to find out which hospital they have been transferred to on 0800 22 8827, 0800 428 8364 or send an email at hotline@guateng.gov.za or support@gauteng.go.za.

FEATURED IMAGE: The cause of the fire at the Charlotte Maxeke Johannesburg Academic Hospital on Saturday, April 17, 2021 remains under investigation. Photo: Amanda Khumalo.