SABC3, which rebranded itself as S3 at the beginning of April, has launched a new locally produced daily drama. It premiered with a double-bill special on the channel on Monday April 5 2021 at 7pm.

The Estate is a gripping telenovela that holds a mirror to our faces. It reflects prevailing South African issues such as land claims, equality, power dynamics, corruption, betrayal and money. The show centres on the beautiful ivory towers and manicured gardens of Echelon Estate, a gated community housing several families from different social classes and walks of life. These range from the elite aspiring to more power, and the middle class struggling to keep up with them, to the workers who frequent the gated haven.

The show starts in 2008 with a land claim protest in a desolate area of Thembalethu, Johannesburg. The almighty Mr Solomuzi ‘’Muzi’’ Phakathwayo (Sdumo Mtshali), a self-made millionaire who comes from humble beginnings, makes a heartfelt promise to the leader of the protest, Shadrack Mokobane (Don Mlangeni), not to touch the land where members of the Mokobane family are buried. 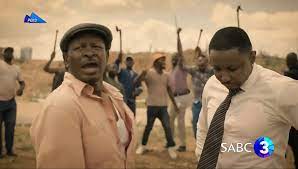 Solomuzi (right) negotiating with Shadrack (left) to stop the protest. Photo: Screengrab from The Estate

Thirteen years later, Echelon Estate gets built in an area overlooking the dusty streets of Thembalethu. All these years later, Muzi goes back on his promise and plans to expand his empire onto the land he promised not to take.

The award-winning cast consists of loved South African actors who have graced the nation’s screens for years. Audrey Poo, who plays Castro Kamanga, a character the audience loves to hate, is the corrupt, funny and power-hungry cousin of the Phakathwayo brothers.

The show also has a strong female presence of beautiful, determined and strong women. One example is Mmakoena (Dineo Langa), a lawyer in a men’s world and wife to Lesiba Molefe (Matli Mohapelo). Her aims are to be made a partner of her firm and to move into her dream home on Echelon Estate.

The Estate contrasts how the lives of the rich are intertwined with those of the poor, through the use of storyline, make-up, wardrobe and location. The show’s production quality is seamless.

As part of its rebranding, the S3 channel aims to target progressive millennials with new content that challenges perspectives on South African social classes. It plans to do this through shows such as The Estate, whose aesthetic suits the channel’s rebrand well.