From the Cave’s Mouth, written and produced by a team working at the Wits University Tshimologong Digital Innovation Precinct in Braamfontein, has been selected for screenings at the Barnes Film Festival in the United Kingdom (UK) and the Los Angeles Rocks International Film Festival (LARIFF).

From the Cave’s Mouth is set in a small cave in the southern hemisphere of ancient Africa. It tells the tale of a Khoisan family who have lived in this cave for generations and how they abandon it in search of the son who went missing.

Over time, the cave becomes dilapidated and overgrown, until one day, thousands of years later, it is rediscovered by a boy. This boy turns out to be a distant relative of the original family.

Jeani Varty, the film’s writer and director, says that they used a Khoi dialect in the film called Khoe Khoe Gowab. According to Varty, this dialect is one of the oldest living languages and is “only spoken by about 20 people worldwide.” 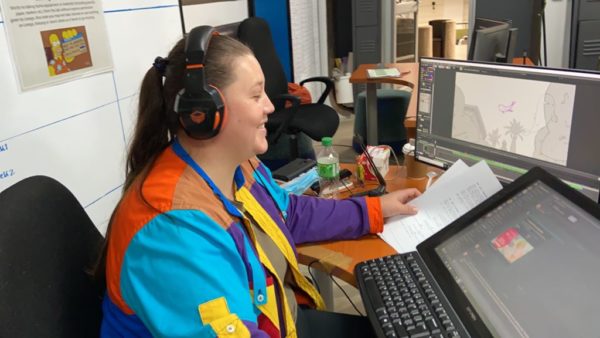 Varty adds that the film was born out of the Tshimologong partnered Animation Jam, a challenge where a production team is assembled and given 48-hours to create a short film around a given theme. The theme for the 2020 challenge was legacy.

The film was developed more substantially by Varty and her production team when she joined Tshimologongs Young Directors Programme.

Joy Molewa, co-developer of the film’s distribution strategy, says that they used the services of a festival doctor in the UK to identify suitable festivals for the film. A festival doctor provides tailor made consultancy services for film festival candidates.

“We are planning to submit to more festivals in the African continent, starting with Zanzibar,” says Molewa. Varty adds that she is aiming to have the film screened at the Cape Town International Film Festival later this year.

For now, animation fans can catch the film online at The Barnes Film Festival on Thursday, April 29. It will also be screened at the LARIFF later in May.