REVIEW: Dead Places – Not All Ghosts Are Dead

Netflix series explores the supernatural, life after death and reincarnation.

South Africa’s paranormal series, Dead Places, has made a mark on the world’s most popular streaming site, Netflix. The eight-part series topped the charts in Brazil just four days after its April 16 premiere on the streaming platform.

The show’s creator and director Gareth Crocker, who brought South Africa’s first series, Shadows, to Netflix, called it “a global series for Africa” in an Instagram post.

Dead Places captures the life of a South African–born author, Will Stone, played by Anthony Oseyemi, who from a young age experienced various encounters with ghosts and other mysterious spirits. It is from these frequent interactions with the paranormal that he grows up to become a supernatural expert who captures his personal experiences in his writing.

However, despite his book’s international success, Stone is forced to move back to South Africa from the UK because of his struggle to break through to a young audience that could potentially increase his earnings to enable him to afford the comfortable life that he has become accustomed to.

Stone’s return home revives his past traumas and supernatural experiences, which he seemingly only experiences in South Africa. Shortly after his return, a woman named Kelly, played by Shamilla Miller, introduces herself to Stone seeking his assistance in ridding her of a ghost. This is where the plot of the series unfolds.

With the success of his first mission, Stone takes it upon himself to visit all the places in South Africa that are plagued with the supernatural. It is also through this event that Kelly becomes Stone’s social media assistant to help him get in touch with a younger audience.

Another interesting character, who soon forms part of Stone’s team, is ex-police officer Joe, played by Rea Rangaka, who is hired to drive Stone on his missions while at the same time, keeping him safe. Joe’s character makes the show more palatable and lightens the intense scenes of paranormal activity. The trio travels across the country to assist individuals, families and communities that are haunted not only by ghosts, but also by demons, witches, voodoo dolls and even assassins. 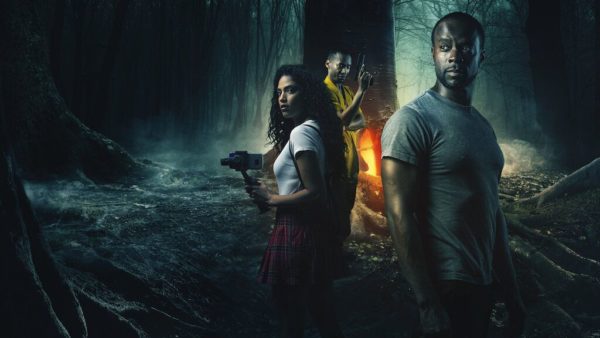 From left: Kelly, Joe and Will Stone on one of their missions to solve a paranormal mystery. Photo: Screengrab from Dead Places

The series is not for the faint-hearted. It is filled with suspenseful music which adds to the uncertainty of what will happen next.

Apart from the supernatural, the series explores the themes of life after death and reincarnation.

The overall production of the series is impressive with many illustrative scenes of South Africa’s attractive locations. Interestingly, one of the episodes is based at Wits’ Origins Centre which makes the show all the more relatable and enticing.

The acting is commendable with all the actors clearly understanding the roles of their characters and successfully carrying their personas through the series.

A drawback is formulaic episodes which begin and end in the same way despite the introduction of new paranormal entities, locations and communities. The presentation of a few of the supernatural entities also stretches their believability.

What makes the show appealing, even with its predictability, is the personal struggle that each of the three main characters are confronted with.

The series invokes questions about events that take place beyond the physical realm. The incorporation of diverse characters breaks the stereotype that superstitions and everything to do with the supernatural is only applicable to black communities.

Writing in Digital Spy, Bernard Dayo says, “Perhaps the greatest lesson from Dead Places is that monsters can be of supernatural origins and also man-made, and that deception can be a necessary tool in blurring these distinctions.”

Ironically, the primary storyline of Dead Places is not about the dead. If you are invested in consuming unconventionally daring and mind-blowing series, then Dead Places might be your cup of tea.

FEATURED IMAGE: The official poster for the series. Photo: Netflix