SLICE: Yoga keeps me in touch with the divinity within

Yoga and meditation assist me in maintaining flexibility, strength and balance beyond the mat.

Professionals were always held up as the ones that might assist me with fighting the challenges I faced but my sessions with various psychologists never went beyond two sessions because they were always quick to send me to a doctor for pills whereas a listening ear was what I needed.

I was introduced to a life of silence from the tender age of one when I would attend speech therapy sessions with my mother after she had survived two strokes. My quietness derives from anxiety. My withdrawn behaviour comes from a lack of self-belief and fear of becoming an embarrassment by making a mistake in my speech.

Consequently, I have had to deal with the voices of those who have told me I exude mental illnesses such as bipolar disorder or schizophrenia, on top of the chatterbox in my head who overthinks everything. While the voices have grown louder, my mouth has remained timid.

Besides journaling, movement became my form of expression.  My enthusiasm for yoga began as a nine-year-old, when I asked my primary school physical training teacher out of curiosity to teach me how to do a headstand. She refused simply because she could not teach what she had not learned, but instead told me I would not be able to do it.

Learning to balance the weight of my body on my head, being flexible to do splits and having the strength to do a wheel pose had lingered since then.

I discovered the seven main chakras (wheels of energy points in the body) through random research. The throat chakra – fifth main chakra – became my peak of interest as it deals with authentic expression that comes effortlessly. It always meant something significant to understand the artistry behind every asana, the physical practice of yoga poses. 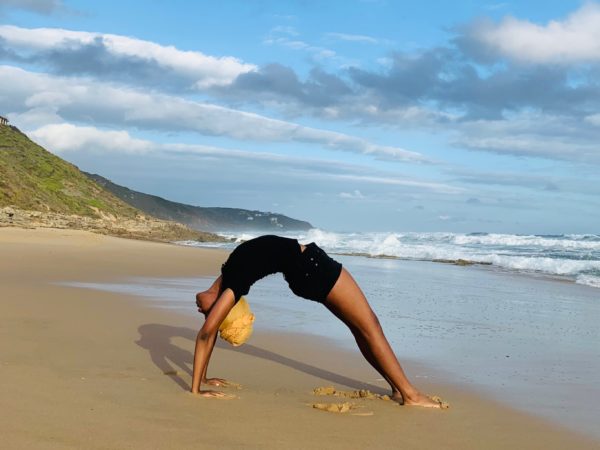 In the pursuit of balancing my blocked chakras, I began practicing energy healing through meditation. Little did I know that unfolding my yoga mat in 2015 for the first time would introduce me to a spectrum of universal existence.

Understanding that I am a spirit inside a human body and not the other way round brought ease to my anxiety, which often peaked during social settings.

As I grew older, I noticed that humans get themselves hooked on a “poison” and label it a coping mechanism, consciously deciding to end their lives slowly because death is inevitable regardless.

Depression crept up on me in my second year of university in 2019 after being consumed by narcotics, my poison, because school and life had become unbearable. It felt as if everything had collapsed right in front of my eyes.

It became hard to accept the expectations that I was supposedly not living up to, and those horrible voices in my head chanting “you’re worthless” and “you’re stupid” were not hearing me shouting back.

It seemed no one understood me, and I pleaded with the universe to end my life for me because I was too much of a coward to do it myself.

Writing about it alone did not feel like I was winning the war. Yoga became a pivotal part of my life as I learned to listen to my body and mind. Focusing on my breathing made it so much easier to identify and kindly open the door for anxiety to step out. I learned to practice with intention and to raise my awareness.

This led me to focus on my biggest investment – myself. Amidst the chaos, I found appreciation in the stillness and calmness of my being. I had chosen to prioritise growth and letting go of what no longer served me. This included surrounding myself with people who are living up to their potential, as is my intent.

There are times when life gets hectic, and I end up too busy to fulfil my ‘flow of the day’. However, I lead myself in kindness and love when I get back at it. Connecting with the mind, body and soul is such a tranquil experience that it becomes easy to understand the divinity that exists within.

Seeking help from within has assisted me in fighting so many silent battles. I could wake up in control and lose it in the next minute and not know what the heck is going on or what life is. I have learned to accept that we all go through our individual problems and have a history with ourselves.

The hardest pill to swallow about adult life is that the show must go on.  You could be going through the toughest of patches, in the basement of rock bottom with no sight of light, yet, despite everything, you must still get up, act your part and be good at it.

The most essential lesson yoga has taught me about life is that anything is possible through commitment and dedication. If you commit to the practice, then it will commit to you. That is a commitment I am constantly making for the betterment of my mental health.