I would like to tell you I woke up early one morning and started running because I wanted to be healthier and nurture better habits; but that would not be accurate.

A more truthful account of events would be that I started running to fit into an LGBTQIA+ community that has unreasonable expectations of ideal body structure and size. Many gay men, including myself, use physical activity as a way to deal with anxiety, and as a medium to assert masculinity.

My preferred activity was long-distance running. I started running in 2018. It was an easy sport and did not require sheer brute strength I did not have. Since then, I have participated in several long-distance running races, ranging from the Soweto Marathon to the Rundela27 and many others, all for the fun of it.

Growing up queer and effeminate in Soweto, I was always anxious and did not quite fit in with the boys who were more masculine and who chose to exhibit their masculinity through sports and physical prowess. Throughout my schooling, I recall being mocked for having a voice that was too high–pitched, and having a wrist way to loose to participate in any sport.

This led me to associate sports with masculinity and to eventually use sport to assert my own. These associations continued until my first few years in university, where seemingly banal comments about my sexuality conjured up horrid childhood experiences of bullying and isolation. This was the reason I started running: as a way of running away from these childhood experiences. 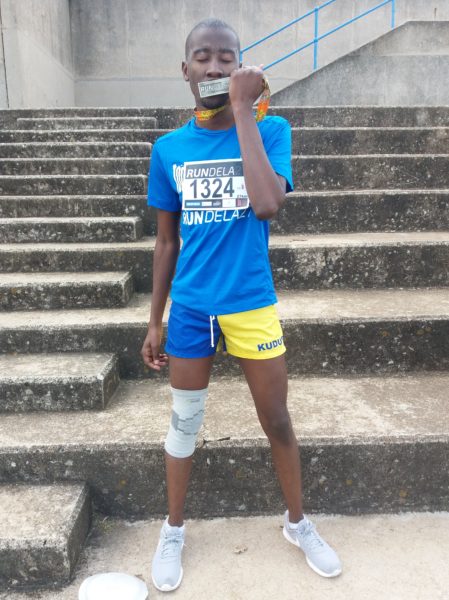 At first, running asserted my “masculinity” and assuaged my feelings of insecurity. It made me feel “manly” and capable. I soon realised, however, that my obsessive quest to exhibit masculinity through the act of running was a never-ending cycle of early mornings and painfully long distances (sometimes as much as 48km). It started to seem that no matter how far I ran or how lean I became, it was never enough for me. I could always run further and become leaner.

This eventually led to misery and greater feelings of inadequacy. I would wake up some mornings with sheer exhaustion and in no mood to run. Only the thought of my flimsy wrists and a body that could be leaner pulled me out of bed. Something that once had helped me with my insecurities was now the curse of my existence.

My story is a common one in the LGBTQIA+ community, particularly among gay men. Our obsession with the “ideal body” has often led to an obsession with gym, abuse of steroids or even unhealthy relationships with food. Bigorexia as it is commonly known, is an epidemic in gay men.

I now like to think of myself as the proverbial old and wise man, and no longer run to conform to societal ideals. I no longer run when I don’t feel like it or because I am insecure. I run for myself.

So what do we do with all of this? It helps to be mindful of our language when talking and engaging with other people’s bodies. To be kind when people tell you they want to lose weight, or want to start exercising, and to offer encouragement and support. To do otherwise would simply reinforce internalised feelings of shame

Wits Vuvuzela, SLICE: Observing Ramadan as a troubled non-Muslim , May 2021.