The ongoing conflict between Israel and Palestine has sparked worldwide protest, largely in solidarity with Palestine. From demonstrations in London to New York, another show of support took place outside the South African Zionist Federation (SAZF) led by the Palestine Solidarity Alliance in conjunction with Voice of Justice, on Sunday, May 23.

A recent flare up of violence, this time the evictions of Palestinians in Sheikh Jarrah, a neighbourhood in Jerusalem. A court ruled that the land is owned by Jewish families due to a historic claim to the property on May 10, 2021. This led to a rise of protests by Palestinians in the area and surrounds, as well as increased state sponsored violence by Israeli forces. 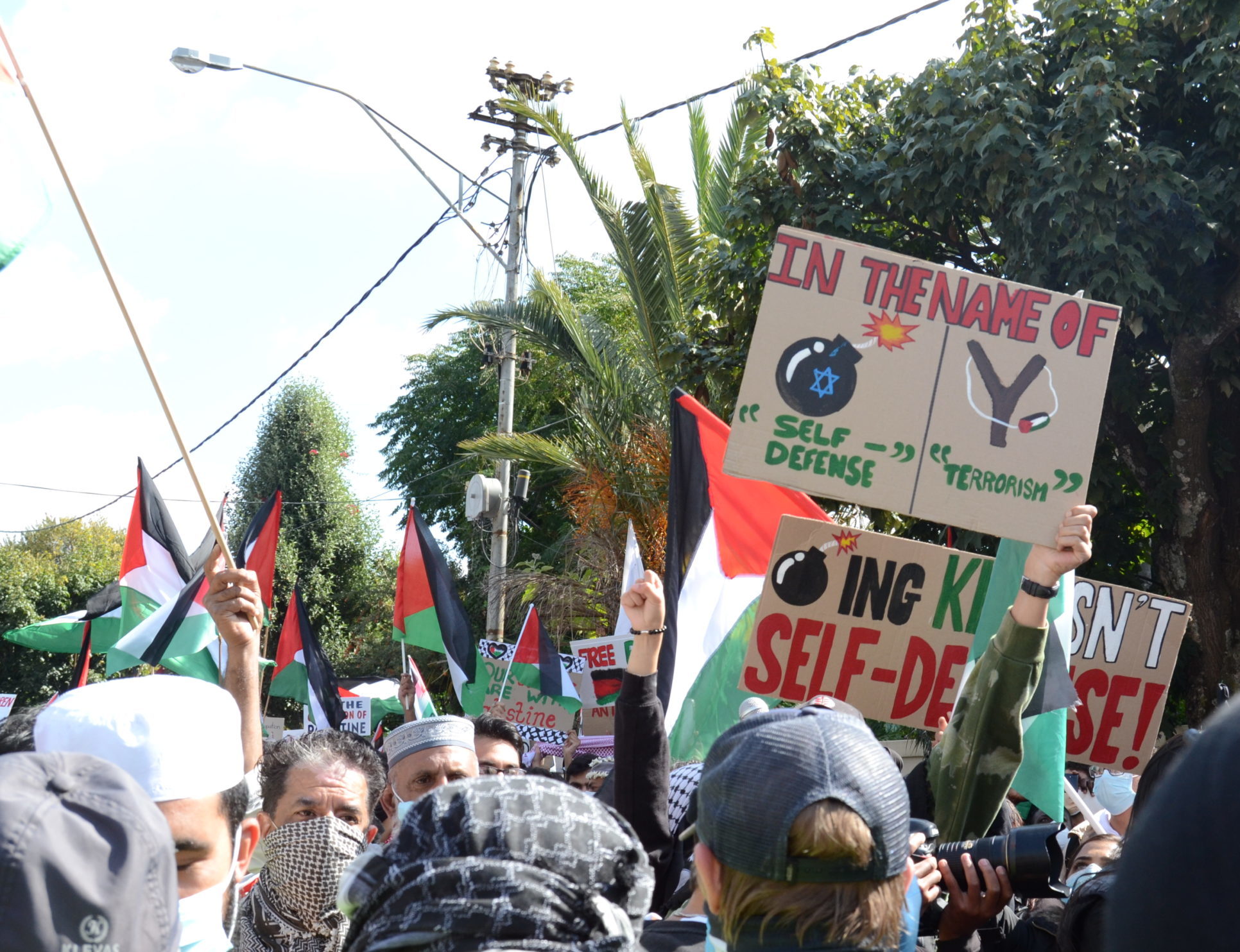 “Bombing in the name of self-defense” and “Bombing kids isn’t self-defense”: Protestors hold up signs outside SAZF. Photo: Zanolwazi Kunene

Marshal’s provide instructions to the security companies at the start location of the protest, Orange Road, Marks Park. The lead marshal, explains that they are not part of the protest, but rather, are there to support the protestors in a peaceful protest, stating that: “No anti-Semitic statements will be tolerated”. 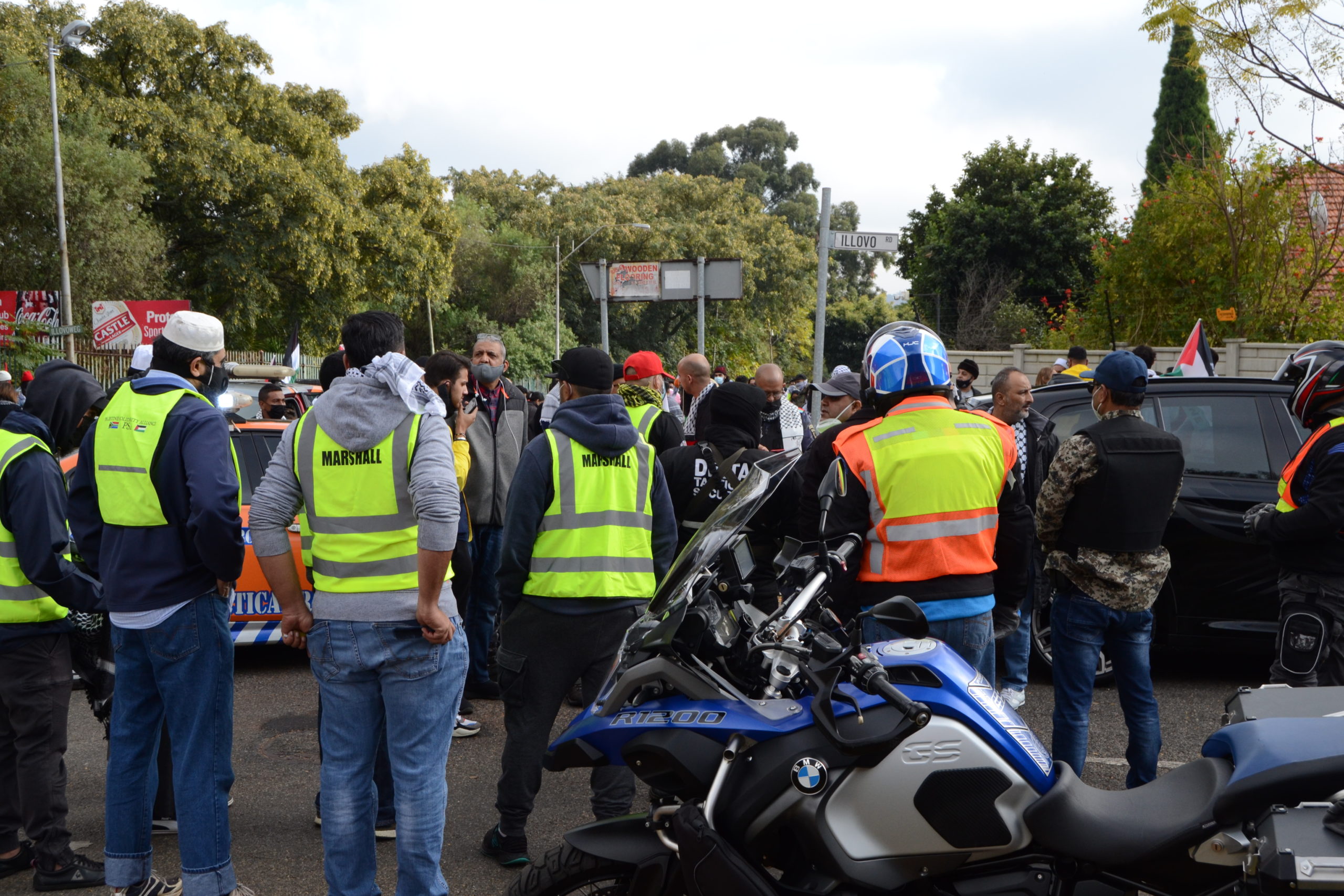 Marshal’s and security company personnel speak before the motorcade to the SAZF building. Photo: Zanolwazi Kunene

“Boycott Apartheid Israel” was the main message heard throughout the day, as the conflict in Israel has been dubbed a form of apartheid. Protesters have called for the withdrawal of financial support from all Israeli affiliations, including consumer brands and products like Clover, Puma and Cape Union Market. Israel claims that their occupation of Jerusalem and the West Bank is temporary and necessary, and maintain a system of military rule through which Palestinians are denied access to civil, political and economic rights. 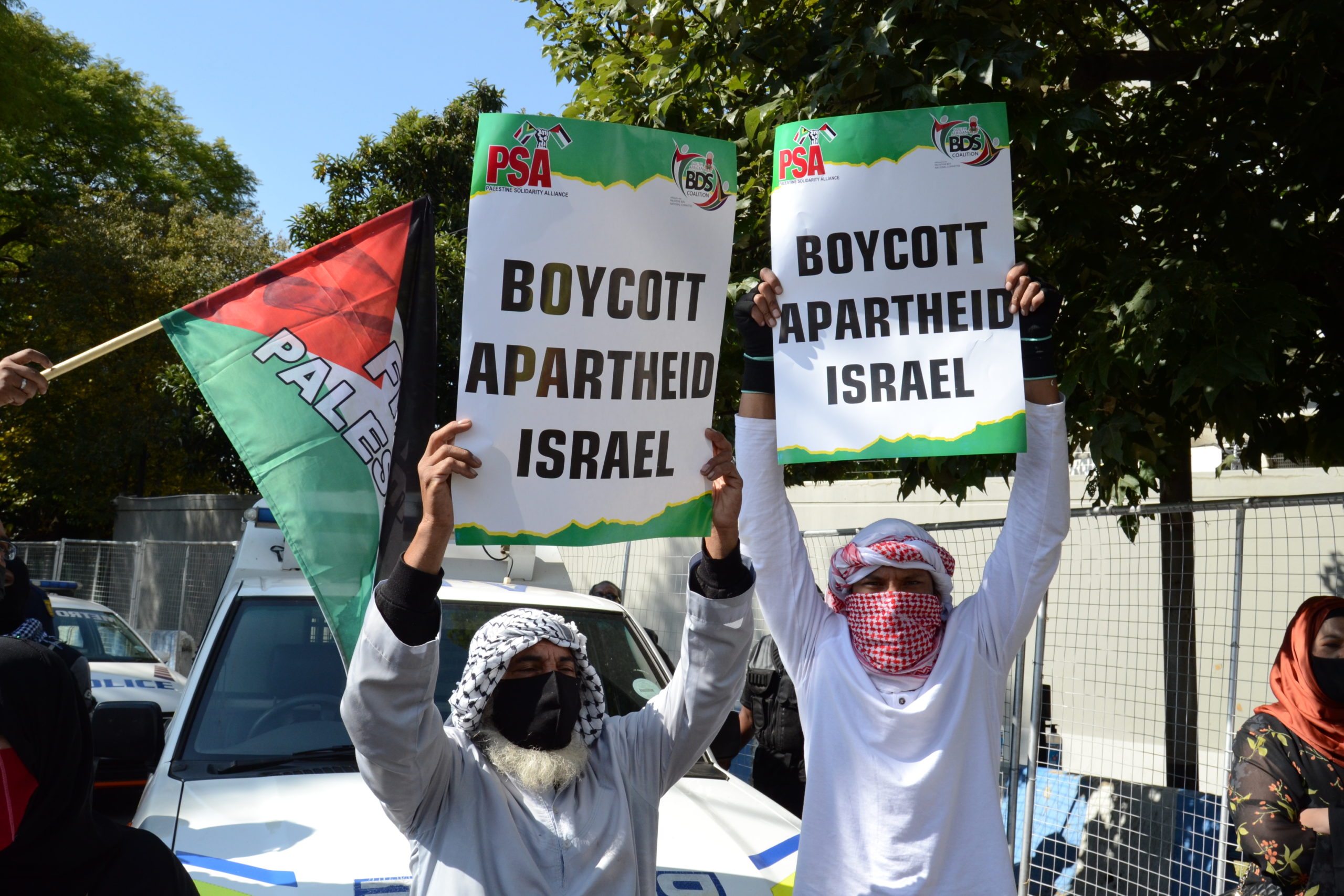 “Boycott Apartheid Israel”: Calls for the boycotting and sanction of Israel due to their “oppression” of the Palestinian people. Photo: Zanolwazi Kunene

“Viva Viva Palestine” and “ICC for Israel” were chanted in unison, as several calls to the International Criminal Court to officially impose sanctions on Israel have been made. It was not political leaders or public figures driving this movement, but ordinary civilians – mothers, fathers, children, brothers and sisters saying ‘”free Palestine”. 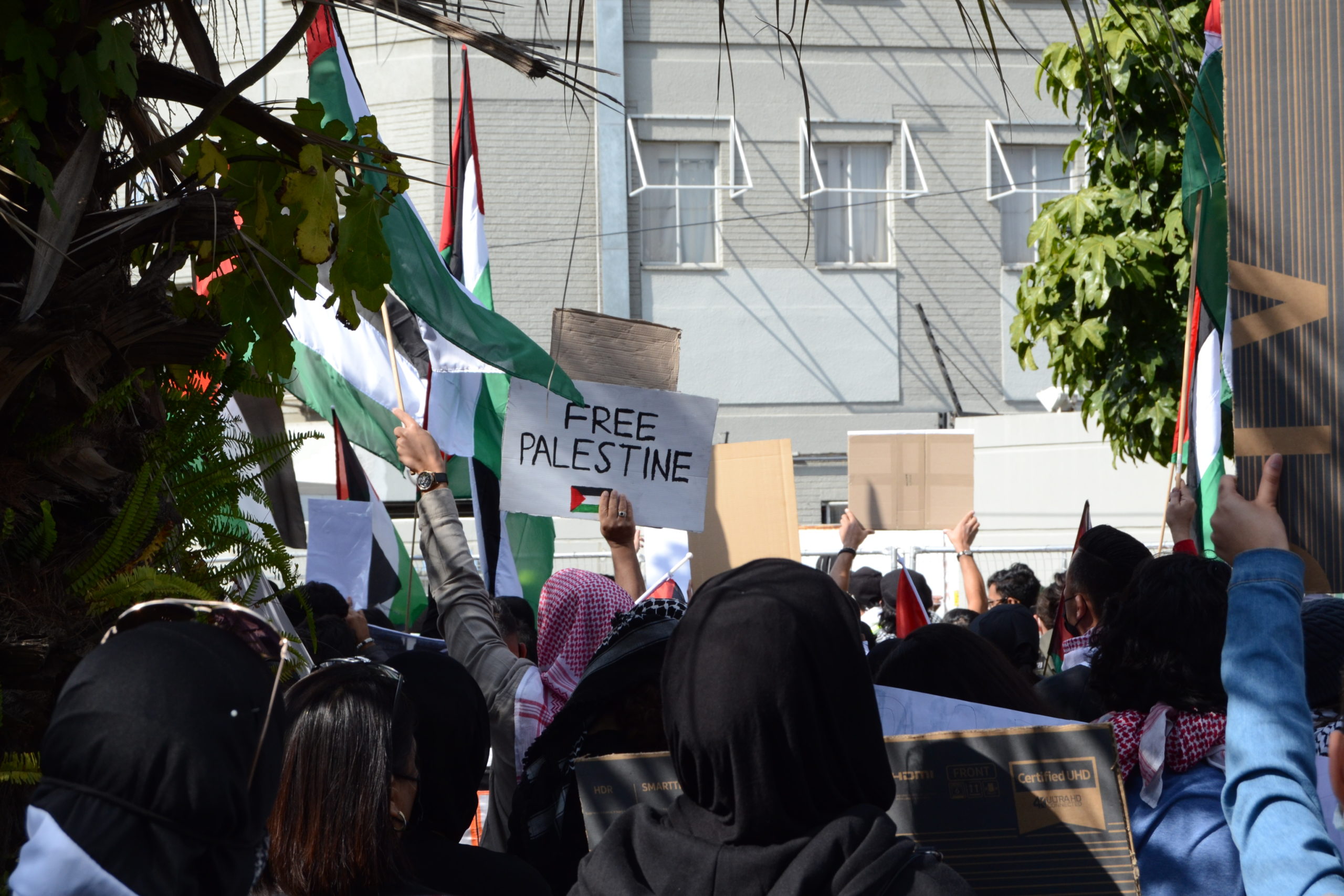 “Free Palestine”: The words chanted throughout the protest. Palestinian flags can be seen held up high. Photo: Zanolwazi Kunene

The protest ended peacefully outside the SAZF before heading to Mary Fitzgerald Square in Newtown. The expected rival protest by South African Jews took place inside the SAZF behind the shut gates. Music was played to drown out the Palestinian protestors, however, this did not stop them as they chanted louder and louder in unison. 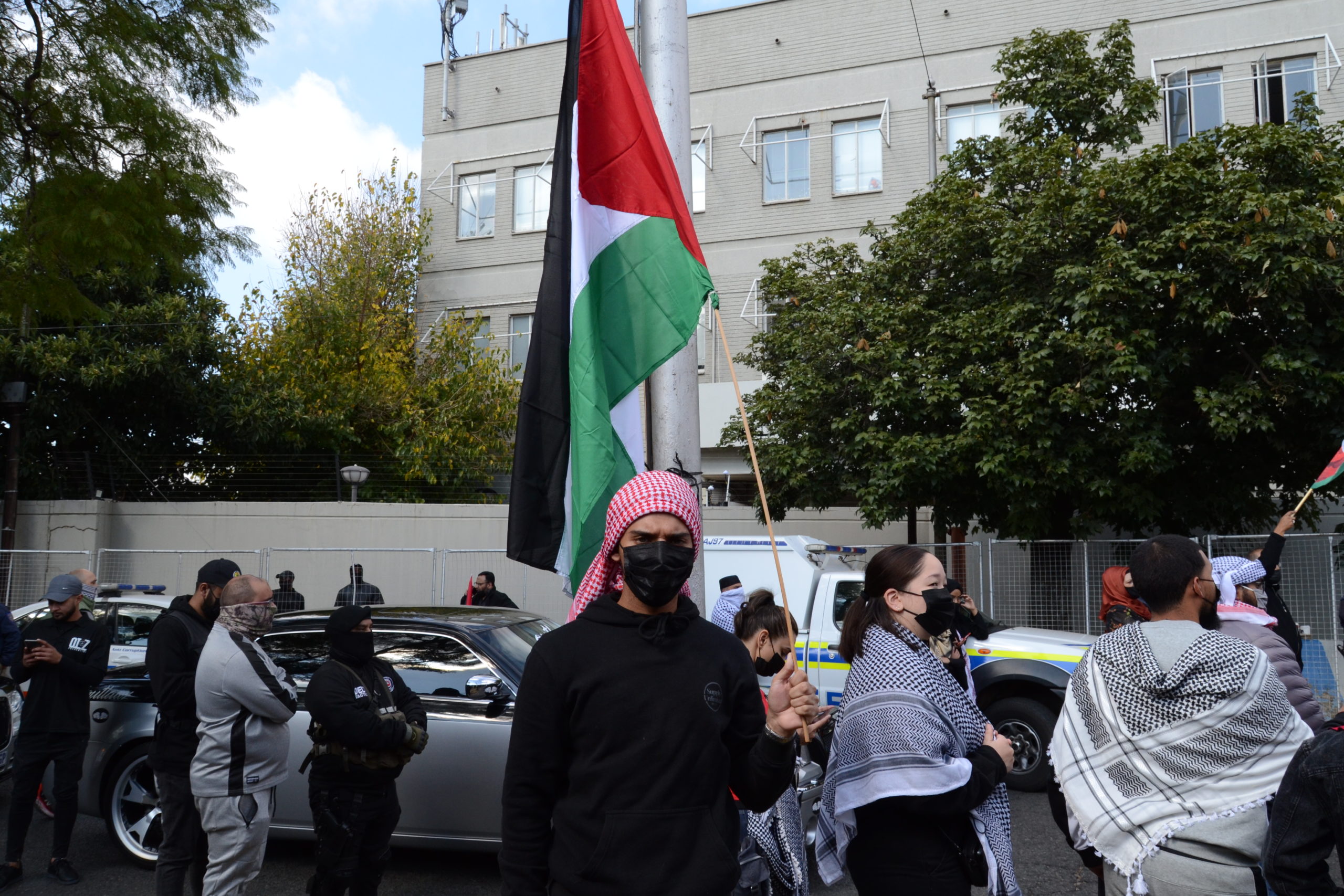