Construction is set to begin at a site in Jorissen Street, Braamfontein, after a company in South Africa was granted R150 million by an arm of the World Bank to build new student accommodation.

The International Finance Corporation (IFC) invested the money in the Eris Property Group’s South African Student Accommodation Impact Investments programme, as reported by Business Insider. The programme is aimed at helping to meet the demand for such accommodation.

The IFC is part of the World Bank, while Eris deals in commercial developments in the South African and Sub-Saharan African markets.

To establish the purpose of the Jorissen Street project, Wits Vuvuzela interviewed contractors at the Caltex demolition site. Speaking on condition of anonymity, the contractors said the construction was making way for new student accommodation.” 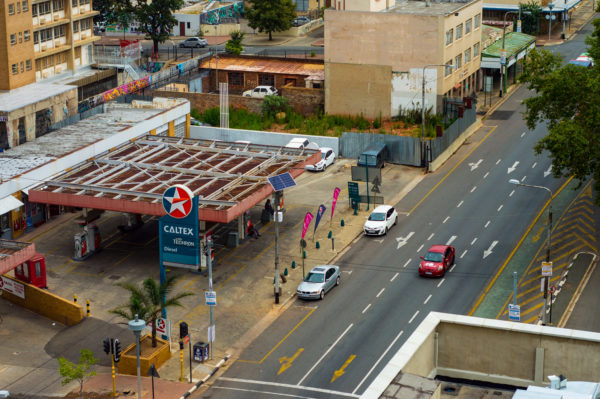 The old Caltex garage before the demolition. Photo: Alfonso Nqunjana

The Rise post said the project was originally set to begin in 2019, but it had been delayed. It is part of a Jorissen Street development scheduled to be completed in 2022, according to Business Insider.

Eris Student Accommodation executive head Johan van Vuuren declined to provide Wits Vuvuzela with further details at this stage. “Before we can give you detailed information, give us a week or two to settle everything with the development internally,” he said.

The company has opened two student accommodation buildings so far, one in Cape Town and the other in Pretoria.

FEATURED IMAGE: Aerial photo of the demolition of the Caltex service station at the corner of Jorissen and Station streets. Photo: Alfonso Nqunjana