Manganya successfully completed the first day of his journey on the evening of Sunday, May 30, walking 42km from Wits to De Deur, a small town near Orange Farm. He spent the night resting at a Total petrol garage in the area, as he was unable to afford proper accommodation. At the time of writing, he was walking on the second day and expecting to rest in Duncanville, Vereeniging.

The initiative, which has gone viral on Twitter, is raising funds through requests for donations and approaching various stakeholders to request their support. The first two sponsors of the initiative are Mbhashe Local Municipality in the Eastern Cape and the AmaXhosa Kingdom. Avis car rental company have also pledged their support to Manganya on Twitter as of Sunday, May 30, by sponsoring him a rental car that a driver will use to escort him on the journey for safety and for storing supplies. He has also been interviewed on eNCA about the initiative.

Wits graduate @thami_manganya is starting his 20-day 800km journey from @WitsUniversity to #Dutywa in the Eastern Cape ON FOOT w/ the goal of raising R1,28 million for #eduction and #sport resources for rural schools in EC! @WitsVuvuzela #TeamVuvu pic.twitter.com/3k2292ynxv

The initiative aims to alleviate some of the limited access to education and sporting resources that many schoolchildren in the rural Eastern Cape face. Manganya personally experienced this when growing up in Nqabara, Dutywa while attending Xolilizwe Senior Secondary School.

“This played a part [in me wanting to do] this initiative so that I can [provide] those things that I feel were lacking during my time when I was a youngster,” says Manganya. “I [want to] make sure that the children growing up who are from the same background as me are not experiencing the very same things I went through.” 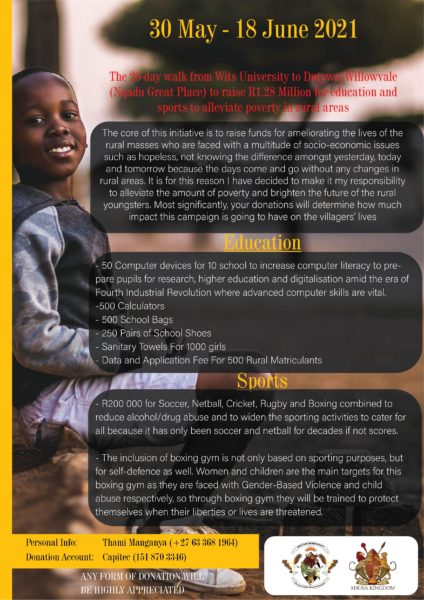 The poster being used to promote the initiative on social media. Photo: Provided

Manganya will use a portion of the funds being raised by the initiative to purchase 50 computer devices for 10 rural schools to improve computer literacy, 500 calculators, 500 school bags, 250 pairs of school shoes, sanitary towels for 1 000 girls, and data and tertiary education application fees for 500 rural matriculants.

He hopes that by providing these education essentials, more children in the rural Eastern Cape will be encouraged to continue with their studies, and that they will eventually enrol in tertiary institutions to better their career opportunities.

“With me doing this initiative, I’m trying to send the kids to school so that they can see this thing of education as fashionable [and important],” says Manganya.

He will also allocate R200 000 from the funds to build sporting facilities in the rural communities for soccer, netball, rugby and boxing, as well as a gym facility to teach self-defence classes to women and children to protect themselves against gender-based violence and child abuse respectively. He also hopes that encouraging sport among the youth will prevent them from abusing drugs and alcohol.

Prince Ndabele Mtoto, royal spokesperson for the AmaXhosa Kingdom, says that the kingdom is holding meetings with various municipalities, mayors and stakeholders in the Eastern Cape to bring further support to the initiative.

“In our society, people are very poor. So, when someone is coming up and willing to give or to sponsor people, most especially the young ones, it needs our support,” says Mtoto.

Manganya says that he will personally manage the funds to prevent external fraud and will assist in the purchase and delivery of resources to various needy schools throughout the Eastern Cape. He aims to work closely with the Eastern Cape department of education and teachers in the province to identify and assist the schools that are in urgent need of assistance.

Manganya will be accompanied on the journey by his friend and Wits BA history honours graduate, Sihle Luma (24), who will be travelling in the car with the driver and documenting the journey on social media.

“I had to jump on the opportunity because [our childhoods had the] same experience, as we both grew up in the deep rural areas of the Eastern Cape,” says Luma. “We know how the situation is there, so helping, or trying to help, is something we wouldn’t let pass by us.”

To train and prepare for the long-distance walk, Manganya has been walking almost daily for five hours around the Wits Dig Fields on West Campus between 6:00 and 11:00.

He is optimistic and determined to reach his goals, despite some people’s doubts that the journey will be too difficult to complete or that not enough funds will be raised.

“It’s going to make people see how committed I am [and] what I am prepared to do for society because it seems impossible, but it’s definitely going to be done,” says Manganya.

Since completing a BA degree last year, he has been doing freelance photography while applying for permanent employment.

This initiative will be Manganya’s first personally organised humanitarian effort. He plans to do more humanitarian initiatives in the future to further support rural communities, though no specific plans have been made yet. 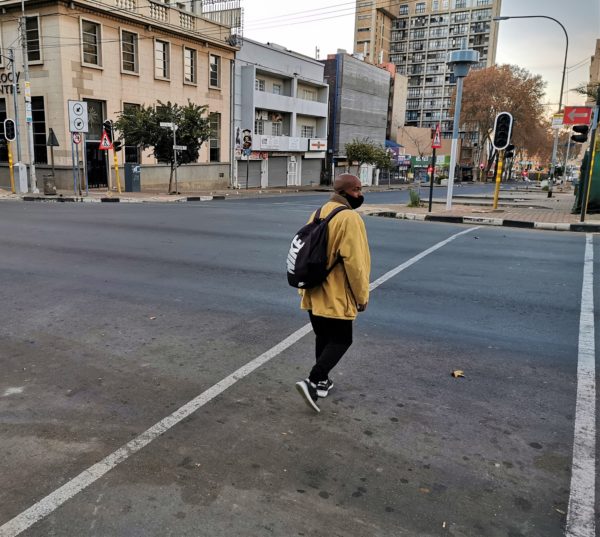