SLICE: I did not feel black anymore

An avid attempt to understand the intersectional identity of a black child in a white private boarding school.

I was the only child who identified as black in a class of about 20 white learners for four years at a private boarding school in Pietermaritzburg, KwaZulu-Natal. I was not aware of race at that age, nor how I had become detached from my culture, until I was 12 years old.

I became aware of myself and the person I had become in 2011 and 2012, when certain classifications started circulating on social media that were then brought up during a break conversation. It was about how people identified themselves according to sweets; a Top Deck or an Oreo. A Top Deck is a white person on the outside but black inside, while an Oreo is black on the outside but white inside.

“Amanda, you are an Oreo,” one of my friends (let us call her Becky) said. Laughingly, I asked what it meant. It meant I was black because of my skin, but I behaved like a white person. Not entirely sure what ‘‘white behavioural traits’’ she was alluding to besides my accent, which had developed to be distinctly white South African, and having more white friends than black, I agreed but was not entirely certain.

I became more aware of my blackness, or lack thereof, after this encounter because I was vested in the idea of why I was identified as an ‘‘Oreo’’. I began trying to identify what else made me seem so ‘‘white’’. I started noticing how being black and Zulu was second nature to me, and I was unsettled and saddened by this.

I entered this school in grade four. As I grew older, towards the age of 13, I became frustrated with myself because I could not speak isiZulu fluently: My Zulu accent would have hints of English in it, and my pronunciation of words would be completely off. My brother, one of two, who went to the neighbouring all-boys boarding school, also struggled to speak Zulu fluently. Our eldest brother, who went to a diverse public school, spoke fluent Zulu, Afrikaans and English. It was then I realised that where there is a lack of diversity, a disturbing development is reflected.

I recall visiting my grandmother in Madadeni, Newcastle. I was sitting across from her in the kitchen, telling her about school, but I struggled to express myself. My conversation in isiZulu became brief. Not that my grandmother did not understand English; she was fluent. She understood wisely that I was struggling, so she would nudge me to keep on trying.

I realised we did not look different: I resembled my gran, and I am the spitting image of my mother. My grandmother, who went to school in Sobantu, Pietermaritzburg, was a head girl and excelled at sports. I was not far off from her. My mother went to boarding school at Dlangezwa High School in Empangeni. She excelled and continued to study at university. I was not far off from her, either. 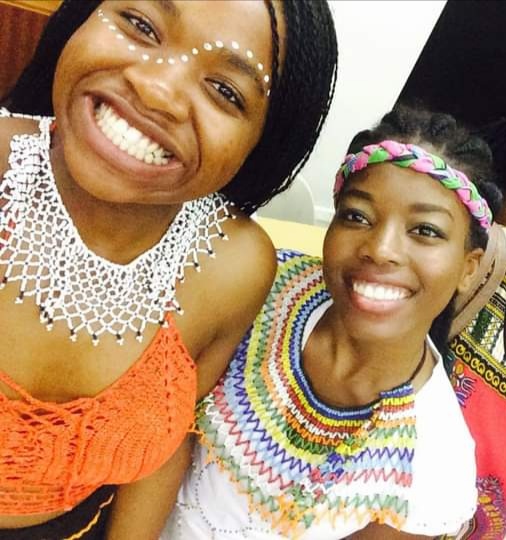 Amanda Khumalo and classmate, Londiwe Hadebe in 2017 during a Zulu Evening, where students who took isiZulu as a second additional language participated in traditional dancing, food, singing and poetry. Photo: Amanda Khumalo

I refrained from sharing the same festive holiday stories, because they sounded repetitive compared to the stories of my peers, who would have travelled abroad. Memories of childhood did not seem significant, because they were not like those of my peers. Sometimes they would find it hard to understand that I would do the same things over, but I understood that our access to money did not extend as far as theirs did. We were all privileged, but my privilege extended only so far.

The culture at school was eminently European with a Christian ethos. Navigating between my African culture and that of my school, and being removed from home at a young age, made it challenging to clearly understand my culture and explain it to my peers. I questioned whether what we Africans do is right or wrong. How does African dowry, differ from selling a person as if they are property, and how does that frame women in society? Does slaughtering cows as an ancestorial act not go against the 10 Commandments? I did not feel sidelined, but I had sidelined my own experiences and my African identity when my reality was overtly different from everyone else’s.

I felt that Christianity and my African culture could not co-exist. I questioned a lot about being African: Why we do what we do. It was easier questioning my culture and upbringing than it was questioning religion.

Identity became increasingly important to me, which is why I marveled at the idea of going to high school. I knew I would be surrounded by people of a background similar to mine. I remember being excited about speaking Zulu more frequently.

I anticipated that high school would be a reverse Uno card, where I could reverse all my insecurities and start anew; that maybe my insecurities, which arose from being the only black child among my peers, would disappear. They did not. I realised during high school in 2016 that my friends were not the solution, but that a change of systems would be: To a system that distinctly celebrates African identity. Cultural dinners and teaching isiZulu were not enough. There needed to be more.

There is an increasing awareness that goes with being a black child, but more so about how private institutions can unravel issues of class and identity that can be avoided. My experience revealed that private schools need to be cognizant of intersecting identities in general, and stimulate conversations and implement systems that celebrate difference rather than institutionalising their ideal of what unity looks like.