Researchers at the faculty of science at Wits University are the first to discover the hearing abilities of a small creature known as the ‘Frankenstein-dinosaur’, known for being a lightly built animal, with powerful forelimbs for digging.

This comes after the group finalised a study in May 2021, through which scientists made digital models of the inner ears of dinosaurs, as they explored the ecology of dinosaurs.

“James [Neenan, an Honorary Research Associate of palaeontology] was working on a 3D x-ray scan of the Shuvuuia skull and noticed the size of the cochlea was unnatural,” said Jonah Choiniere, professor at the Evolutionary Studies Institute. “He then called me into the lab to have a look, we instantly knew that we had a big discovery on our hands.” 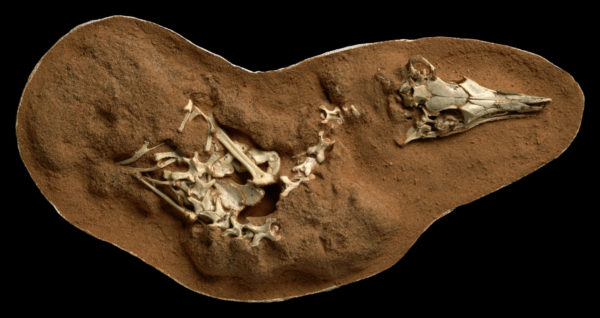 Shuvuuia deserti on exhibit. The picture is copyright the American Museum of Natural History. Photo: Provided

The Frankenstein-dinosaur is a species that is also known as a Shuvuuia deserti from the Gobi Desert Mongolia, that lived 70 million years ago in the desert.  It is a sub–family of a bird-like theropod dinosaur. The creature is a cross between a plant-eating dinosaur such as the Stegosaurus and a carnivorous dinosaur, such as the Tyrannosaurus rex.

“Dinosaurs are the ancestors of birds. By studying this creature, we can further understand where birds initially come from,” says Benson.

The study of dinosaurs allows for individuals to better understand the world that we live in today, providing more knowledge on how the world came to be.

“Not all dinosaurs are extinct. Avian dinosaurs, such as birds, are well and alive today. There are over 10 000 species of birds around the world today, making them much more diverse compared to mammals.” says Kimberly Chapelle, a Wits PhD graduate in palaeontology, who was part of the team of research.

The Wits research team plan on expanding their research on hearing by further investigating the first few species of crocodiles, including those from South Africa.