Covid-19’s lockdown regulations have deprived students of spaces that provide them with a sense of community.

Prior to the pandemic, Wits University’s East Campus would be filled with so much colour. I used to see queer students loudly expressing who they are.

From pride flags flown high during a pride march, to a same-sex wedding that happened on campus. This suggested how much of a liberating space the university can be for queer students. All this colour faded away, however, when covid-19 first made its presence felt in South Africa, in March 2020.

News website iol.co.za reported that when South Africa went into lockdown, lesbian, gay, bisexual, transgender, queer (LGBTQ+) students had to move back to their homes, where their sexual orientations were undisclosed or not accepted. This meant some queer students faced rejection from their communities or families and were victims of violence.

In South Africa, queer people continue to live difficult lives as a result of their sexualities and gender identities. While this is already enough to deal with, covid-19 has exposed them to challenging situations, such as being in lockdown with their abusers, people who lack acceptance for and understanding of queer people.

According to Journal of Adolescent health, approximately 60% of surveyed LGBTQ+ college students are said to have experienced psychological distress, anxiety and depression because of living with unaccepting families and in unaccepting environments. Of these students, 45.17% were from unsupportive families and had to hide their sexual orientations due to covid-19 stay-at-home orders, the journal article said.

Dr Claire Westman, a postdoctoral research fellow at the Free State Centre for Human Rights, says in an article that South Africa is lauded as a progressive country in terms of affording members of the LGBTQ+ community protection and rights through the country’s constitution. This does not, however, extend to the social level and lived experiences of LGBTQ+ community members. This is primarily evidenced by the increased queer killings between the years 2020 and 2021, as well as the social stigma and discrimination the community continues to face.

Westman also noted that the hatred expressed towards queer individuals is often justified on the basis of religion, and one of the challenges that lies ahead in conscientising people about the LGBTQ+ community, is that of altering long-standing cultural, traditional beliefs and social constructs which marginalise and demonise them. She says this cannot be done only through legislation.

As it stands, South Africa has only one shelter for queer people; Pride Shelter Trust at No 1 Molteno Road, Oranjezicht, Cape Town. On a Twitter Space titled Reflecting on LGBTI+ Equality 27 Years into Our Democracy, hosted on Thursday, October 14, 2021 by the Commission for Gender Equality, Jabulani Pereira, an executive director of Iranti, a non-profit organisation focusing on LGBTI rights advocacy, says it is a national crisis that there are not enough LGBTQ+ shelters around the country to take in queer youths who are abused because of their sexualities.

Pereira said they tried to identify shelters that were safe to accommodate queer persons with the department of social development, in response to the covid-19 lockdown. Disappointingly, they were not successful in doing so because “the country’s shelters are modelled in a prison-like system, where people accommodated in shelters do not have the right to mobility.”

Nicole Alexander, director of the shelter, told Wits Vuvuzela that 2020’s covid-19 lockdown proved challenging for young queer people. Complying with the regulations meant reducing the intake of them to 50%. Alexander says, “Reducing the intake capacity was heart-breaking as the intake waiting list was long, due to not being able to provide shelter at full capacity.”

“Oftentimes, some students come from homes and communities where they are not safe due to their queerness, so having a place where they can let a part of themselves be free and affirmed matters”

With Pride Shelter Trust being the only queer shelter in South Africa, the question, what happened to queer students who unfortunately found themselves without a home because of being rejected by their families, comes to mind. Alexander says this has put young queer people at a disadvantage of not being able to access such safe spaces.

The shelter has also allowed the young queer people given shelter an opportunity to further their education, due to the sense of belonging and acceptance received from staying there.

The university remains a safe space

Wits Vuvuzela has reported that a support group such as Be True 2 Me was launched early in 2020 with the intention of helping LGBTQ+ students find safe spaces on campus, where they can interact with other members of the community while also establishing meaningful connections and support systems. With covid-19 having forced everyone to work remotely and students to vacate their residences, it is understandably clear that queer students were affected.

Thando Mabalane, representative of Activate Wits, an LGBTQ+ rights-oriented society based at Wits University, told Wits Vuvuzela the society is greatly important for queer students as it celebrates queerness and provides students with a community to which they can belong. The society additionally functions as a space for mobilising against queerphobia. Mabalane says, “Oftentimes, some students come from homes and communities where they are not safe due to their queerness, so having a place where they can let a part of themselves be free and affirmed matters.”

Mabalane adds that the covid-19 pandemic, which has affected everyone, has also affected the society and queer students quite immensely, because being hindered in hosting queer events disconnected students from the community. She says, “Moreover, covid-19 might have violently affected queer students who come from overtly queerphobic households or communities.”

Bachelor of science in chemistry Wits student, Andrew van der Riet, shared with Wits Vuvuzela that he had a hard time accepting he is gay, due to his homophobic father who believes his attraction to men is a choice. Van der Riet says, “My father is unaccepting of my sexuality because of his religion. He quotes the Bible to validate his bigotry.” Coming to university has allowed him an opportunity to come out and start living his reality without fear. 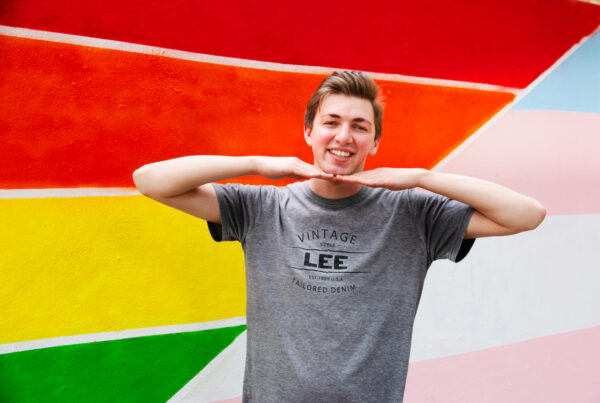 Andrew van der Riet poses in front of the LGBTQ+ wall near The Matrix at Wits. Photo: Tshepiso Ntombela

During the 2020 lockdown, however, he experienced an uncomfortable situation with his father, who makes jokes about LGBTQ+ individuals in the presence of his family and friends. Van de Riet says in instances like these where he feels provoked, he sternly calls out his father’s homophobia and brings it to his attention that his experiences as a gay person do not align with his way of thinking.

The covid-19 lockdown restricted him from visiting LGBTQ+ clubs and events such as pride where, Van de Riet said, these spaces are important as “they are places to socialise with friends and others without feeling stigmatised.”

*Ayanda, a Wits honours in media studies student identifying as transgender, told Wits Vuvuzela her lived experience as a transgender person is characterised by discrimination and anxiety of feeling unsafe in any situation, and this places limitations on her freedom. Although she has never experienced any form of physical violence, Ayanda says she continues to experience “aggressions within personal relations and the general public”.

Ayanda* says some of her family members are not accepting of her transitioning journey and are failing to understand how important this is to her wellbeing. “I experience a lot of misgendering, and this proves to me they are not accepting,” she says.  Misgendering is defined as continuing to refer to a person who is transgender, nonbinary or gender nonconforming using terms related to how they identified before transitioning.

She has further explained that her feeling of some of her family members not accepting her identity largely stems from them referring to her as a he, when she has made it known she identifies as female. She says, “When I correct them about my pronouns, they become so defensive without realising how damaging that is to my self-esteem and wellbeing.”

Ayanda told Wits Vuvuzela that the spate of hate-crime murders faced by the community have increased her paranoia of being a victim of violence as a marginalised individual. She cannot help but feel much anger at how anti-queer people want to control the way queer people choose to live their truths.

She believes a society that allows people agency and control over their bodies and identities is needed for queer people to live freely. For Thambo, it is essential that this society be deregulated of social frameworks intended to demonise queer people.

Another queer student, Mpho Patane, who is doing a bachelor of arts honours in psychology at Wits and identifies as gay, shared his experiences with Wits Vuvuzela and said that, growing up, he experienced a lot of bullying and got rejected by his community before he even knew he was gay. He says, “Most of us who cannot easily hide were bullied from hell and back and the small town (Krugersdorp, on the West Rand) that I grew up in, does not have many openly queer-identifying people.” 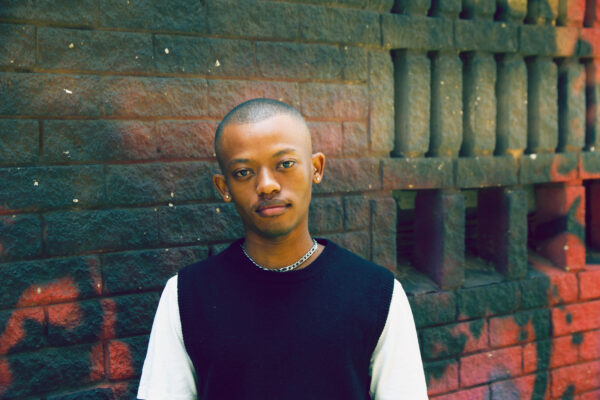 Patane says academics being moved online as a result of the lockdown has robbed him of an opportunity of seeing other queer students loudly expressing themselves. “Every time I was on campus, I would see boys in skirts and makeup, or just a queer couple, and it was normal. The space felt safe. Now that we have moved to remote learning, I don’t see much of it,” he says.

He says he feels he can fully express himself as a queer person when he is away from home. This takes the form of him wearing wigs, makeup and skirts and it doesn’t have to be digestible or palatable, he adds. Patane told Wits Vuvuzela that when he is around his family, he feels his expression of himself is limited. “It’s as if there are limits placed on how far I can take it. For instance, when I came out to my mother, her concern was whether I’ll start being feminine or not. She said it’s okay for me to be gay and date boys, but I should not start dressing like girls. When I’m away from home, there are no boundaries,” he says.

Clyde Kotze, psychologist at Wits University’s Career Counselling and Development Unit (CCDU) and facilitator of Evolving Minds, a CCDU virtual support structure that intends to provide a space where queer students virtually meet to discuss the challenges faced by the community, and their experiences, mentioned to Wits Vuvuzela that just like everyone, the covid-19 lockdown affected the mental health of LGBTQ+ students. Spaces like Evolving Minds are their only support network, thus being cut off from them had adverse effects on them.

Kotze says queer students during lockdown reached out to Evolving Minds because they needed “a place where they can access support from other members in the community. Some members, new to the community, could engage and ask for help navigating queer spaces.  For most, it is a place to feel safe and talk about their personal journeys,” Kotze adds.

Students within the community face many challenges daily, sometimes more than expected. “These challenges result in them fearing for their lives, struggling with anxiety and their identity or sexualities, which stems from discrimination or constantly having to hide who they really are,” Kotze says. He has expressed how such challenges lead some students to go back into the closet, and many students experience depressive symptoms, which then affect their mental health.

Despite worrying about the levels of queer killings and living in fear of being victims of hate crimes, queer students continue to take pride in their identities and hope that one day they will live in accepting communities, where they will not have to hide their sexualities and gender identities.

* Not their real name

FEATURED IMAGE: Wits students gather in Braamfontein to stand against the brutal killings that have plagued the LGBTQ+ community. Photo: Tshepiso Ntombela