Balanced against the bustling and densely populated inner city of Johannesburg stands the glaringly animated paintings of MES Dinaledi Preschool. The crèche, in Hillbrow, is nestled in the middle of a concrete jungle surrounded by high levels of crime, violence and lawlessness.

Judith Ndlovu, principal of MES Dinaledi, has been running the institution for 14 years. She tells Wits Vuvuzela how, as a result of the covid-19 pandemic, the preschool is facing a financial struggle.

Ndlovu says that when South Africa went into its first hard lockdown in March 2020, MES Dinaledi went for four months without an income. This is a financial drawback they are still trying to recover from. Although the crèche is subsidised by the department of social development (DSD), parents and caregivers are expected to pay a monthly top-up fee of R730. Ndlovu says many families are still not able to meet this requirement and in October 2021 some of the school’s accounts are in arrears.

“In our graduation class, four of the children’s fees are outstanding from June. It is still affecting us because when you ask parents [to pay school fees] they say they are working only one day a week, so they are struggling,” she says.

Laverne Titus is an early childhood development (ECD) educator and principal at Little Blessing Educare Centre, a nursery school she started in 2019. She runs her crèche at Botrivier, a small farming town in the Overberg area of Western Cape.

Titus opened her crèche soon after being retrenched from her previous job at another preschool. She moved in with her mother and decided to renovate her two-bedroom house into a nursery school. Then the pandemic arrived and she lost two children: “Two kids left due to the pandemic, one parent lost their job and couldn’t afford the fees, and the other felt he wanted to take his child out due to risks among kids,” she says.

The crèche was established to generate an income for herself and feed her family, because job opportunities are scarce in her area. Titus says it is difficult managing, renovating and registering her crèche as a non-profit organisation, especially considering the size of her centre and her area. “All parents pay my school fees, although sometimes late,” she says. 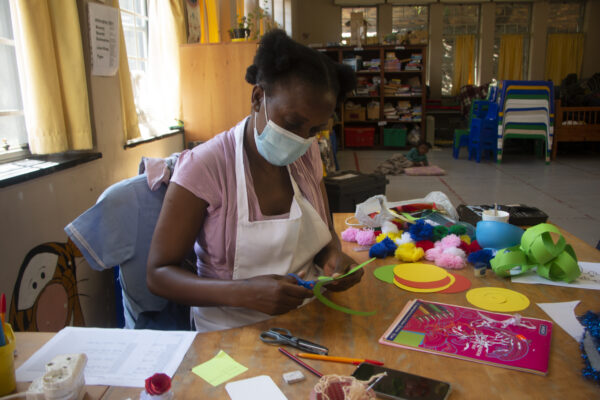 UNICEF reports that the impact of the covid-19 pandemic has not only deepened income inequalities but also increased the education divide among children. The ECD sector is one of the industries that has been hit hardest.

Parents, much like their children, have had to adapt to the covid-19 pandemic. Caregivers are not only battling against the high cost of living, but also employment opportunities that are few to none: South Africa’s unemployment rate is at 34.4%. More importantly, they are struggling to keep their young children at school.

According to the National Income Dynamics Survey, the Coronavirus Rapid Mobile Survey (Nids-Cram), the structure of the ECD sector in South Africa is largely run by informal services which are provided by private suppliers such as small-scale social entrepreneurs and non-profit organisations (NPOs).

A small number of ECDs, which must be registered, receive government subsidies based on a means test and on a per-child, per-day basis, leaving most centres reliant on parents to compensate for their rendered services.

To mitigate the damage experienced by Ndlovu, Titus and other ECD practitioners across the country, President Cyril Ramaphosa in October 2020 announced the Early Childhood Development Employment Stimulus Relief Fund (ECD-ESRF). Applications for the fund opened on February 5, 2021. According to a media release by the DSD, the pay-out is an effort to subsidise the cost of employment and loss of income affecting South Africa’s 110 000 ECD workers.

The initial budget for the relief fund was R1.3 billion, says Prof Eric Atmore, director of non-profit organisation the Centre for Early Childhood Development (CECD). Atmore told Wits Vuvuzela that because the DSD could not produce a coherent ECD plan, R712 million was lost to the national treasury and another R90 million allocated to social worker salaries. Only R496 million remained for the ECD sector.

An article by Ground Up reported that as of September 30, 2021, only 25% of the desperately needed relief funds had been distributed.

ECD centres were told to apply on behalf of all their workers and the money expected for each employee was between R4 400 and R 4 700.

The DSD released a statement on April 16, 2021 saying the challenge in processing outstanding applications was due to a number of errors made by applicants: “Applicants either incorrectly captured the identity numbers of their staff that they had applied for, or provided incorrect banking information.”

The DSD also said it was not aware of how severely underdeveloped the industry was. “We noted with great concern how informal the sector really was, wherein most had no banking details and no proper records of staff, among others,’’ it said.

Research by CECD shows that of the 110 000 ECD workers in the country, only 20% have received funds. Atmore described the application process as exclusionary and says the system set in place by the DSD was complex and bureaucratic.

“In order to access it you needed an instrument, data or WI-FI and you needed a technical skill,’’ he says. ‘‘The system kicked out more than half the applicants and indicated that the information they were punching in was not valid.’’

Many ECD owners, such as Ndlovu and Titus, whose crèches have also suffered financially, thought the relief fund would help them to continue as normal with their operations. However, both are among those who are yet to receive their share from the fund.

Titus applied for the relief funding in February 2021 and eight months later is still awaiting a response. “My application is fully complete; the only thing bothering me is the status, which says I am no match.’’

Titus cannot explain what the status of her application means. ‘‘I don’t understand what it means,’’ she says.  ‘‘It just shows ‘ECD no match’. The toll-free number just rings and when we call there is no answer.”

CECD sent out a survey on March 26, 2021, which analysed the relief fund’s application process. Out of 1 085 participants, 53% replied that the funds would help them “afford food and basics”, whereas 37% indicated the money could assist in supplementing the small income they receive from the ECD programme’s school fees.

The survey also asked what challenges applicants faced when registering for the fund, and 55% said they experienced technical challenges with the application platforms.

Not everyone has had a negative experience with the stimulus fund. Yumna Allie, who runs Otter’s Creek Pre-primary in Cape Town, received the funding, albeit six months after applying. She describes the process as onerous, but she persevered for her staff.

“I had to go to a government chat website to supply business information, like company registration number and bank details. We also had to register each staff member. But I didn’t know in advance all the detailed information I required. I discovered as each page on the site opened. So, each time I had to log out and gather the information and then I would lose all the previous information I had filled in. I could not save the information I uploaded as I went along,” Allie says.

She would often lose up to two hours of progress due to system glitches. “You couldn’t go back to the previous page without losing all the data you had uploaded,” she says.

Modiehi Majake is a mother of two based in Bloemfontein. The creche of her youngest child, Kutloano (5), closed in May 2020. The closure left Majake concerned about how she and her child would cope with the abrupt change. “I was devastated, I put myself in her shoes,” she says.

Majake decided to keep her child home for the rest of 2020 and says she began noticing behavioural changes in her child. “Kutloano became frustrated, she was moody and she would cry a lot.’’

Allie says she has experienced a higher incidence of children in her childcare centre having shorter attention spans as compared to before the start of the pandemic. “Many are restless and fidgety, especially our grade R learners, who were hardly at school last year. The majority of our children’s overall development is delayed in all age groups.

Allie describes her grade Rs as physically regressed for their age. They tire easily with physical activities and a few have become overweight during the lockdown.

An important part of the economy

“If ECD programmes stop, many people would not be able to go to work. The government needs to recognise the massive role ECD programmes play in our economy now and in the future”

ECD centres do not only offer parents a place to keep their children safe and occupied during the day while they work; they also employ people.

Majake says if circumstances allowed, she would be fully present for her child’s education: ‘‘I believe in education. I would home-school if I could. However, most parents do not have the time and resources to be fully present.”

ECD expansion and senior financing manager at Ilifa Labantwana, Laura Brooks, says, “If ECD programmes stop, many people would not be able to go to work. The government needs to recognise the massive role ECD programmes play in our economy now and in the future.”

Allie’s establishment also suffered a knock with loss of income and staff. The number of children enrolled in her establishment shrank by 41% and she lost a quarter of her staff because of the pandemic. “Before the lockdown our pre-primary school had 85 children registered and we employed 12 staff,’’ she says. ‘‘To date we have only 50 children and eight staff.”

Brooks says that, “ECD programmes that serve poorer communities would be much less likely to have the resources to withstand the lack of income they had to endure during the hard lockdown.”

Titus employs two educators and caters to 12 children divided into two classes. She wants to use the money provided by the fund to supplement food supplies for the school. “Our school is not very big and we do not receive enough income,’’ she says.

The number of children enrolled in Hillbrow-based MES Dinaledi has dropped from 130 to 116. Ndlovu, the principal, also notes that other social relief efforts, such as companies donating Christmas gifts to the children and paying fees for struggling families, have stopped.

“Normally organisations come over and donate to the children as well as offer bursaries to them. It didn’t happen last year (2020) and there has been no calls this year so far,” says Ndlovu.

The ECD sector is due to move to the department of basic education (DBE) in April 2022. Professionals in the sector say it is a well-overdue transition and are hopeful it might result in greater formalisation and prioritisation of the sector.

Atmore, who often calls ECD the forgotten sector, says: “Basic education cannot do worse than social development has done. There has been cruel and systemic abuse of children. I think we need to give the basic education department the opportunity to set early childhood development right.” 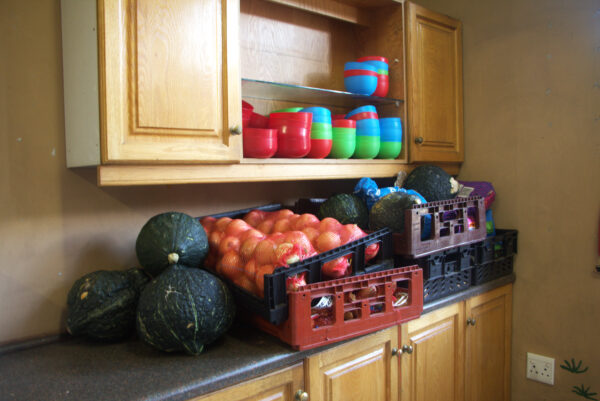 The ingredients for breakfast and lunch for 116 little tummies at MES Dinaledi Preschool in Hillbrow, Johannesburg. Photo: Keamogetswe Mosepele

Brooks says, “I think DBE will really be able to see the link between the importance of development of early years of life and outcomes later in life. One of the risks of it, though, is that it will only be seen as an education function, while ECD involves a lot more in terms of social protection, care, health and nutrition.”

Wits Vuvuzela made several attempts to contact the DSD communications department, but did not receive a response at the time of publication.