Rotation at schools is a vicious circle

The impact of rotational learning on South Africa’s widening inequality and the educational outcomes of disadvantaged students.

“Education, then, beyond all other devices of human origin, is the great equalizer of the conditions of men, the balance wheel of the social machinery.” — Horace Mann, 1848.

The covid-19 pandemic has disrupted the traditional way of schooling. Learners no longer attend school daily.

With thousands of schools in South Africa overcrowded and failing to implement social distancing, which is imperative in ensuring the virus does not spread, the department of basic education (DBE) announced that schools would be expected to introduce a rotation system to allow for social distancing in class.

This has mostly affected no-fee schools with fewer resources and dilapidated infrastructure. It has meant that in some cases learners attend school only once a week. The only grade that has not been affected by the rotation system is grade 12.

In the future, however, the rotation system is likely to have dire consequences for these learners and could add to already shocking drop-out numbers.

This has had some consequences for South African schools. For one, it means schools had to effectively halve the number of children in class to comply with government restrictions. Covid-19 has led to the greatest disruption of basic education since the public service protests of 2010, when children missed out on more than a month of learning. 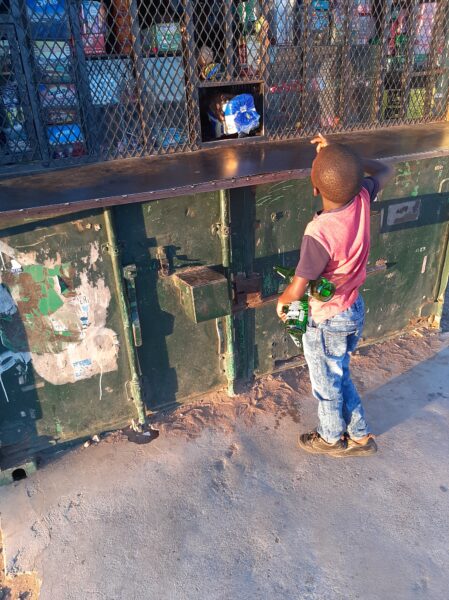 An 11-year-old boy in the Orlando East township in Johannesburg, buying a loaf of bread from the local spaza shop on Mpanza street. he has three bottles of Heineken to trade in for the R3.50 refund they give back. The proceeds of the bottles were used to pay for the balance of the white loaf of bread. Photo: Ntando Ximba

To allow for social distancing in classrooms, and as a way to play their role in curbing the spread of the virus, on June 30, 2021 the national department of education presented to Parliament the rotational learning system. Under this system, schools around the country would implement a bi-weekly learning programme which would see 50% of the learners attend one week, while the others stay at home. The learners who attended in the first week would then stay at home the following week, to give the others the opportunity to attend. Other schools around the country have implemented a daily rotational model, where learners come in one day and skip the next, and vice versa.

Since its implementation, the rotational learning model has resulted in severe losses of learning time for South African learners. The National Income Dynamics Survey – Coronavirus Rapid Mobile Survey (Nids-Cram), conducted by Debra Shepard from the University of Stellenbosch, in conjunction with Nompumelelo Mohohlwane from the DBE, predicts that between March 2020 and June 2021, most children in primary schools will have lost between 70% and 100% of a year of learning.

These learning losses have resulted in greatly trimmed annual teaching plans (ATPs), the results of which will have the ‘‘knock-on effect’’ of schools implementing catch-up/accelerated learning programmes for years to come.

The study also says that, since the onset of rotational learning, children have been put at greater risk of dropping out of school, lagging behind and losing learning, as well as food insecurity and emotional health deterioration.

More alarming is the fact that one in 10 households with children of school-going age report non-attendance of at least one child.

Programming director for the Zero Dropout Campaign, Merle Mansfield, says it is learners in the poorest parts of the country, and those in no-fee schools, who have been affected most by the rotational system. Mansfield says this may be because when schools were closed, the learners in these settings were not likely to access resources to continue learning, and in addition were less likely to get the required academic support at home.

According to Mansfield, children in poorer schools are already starting at a lower base, and any missed day of school compounds the problem. Data from the DBE shows that only 40% of learners in poorer schools (quintile 1-3) are at the right age for their education and 60% have already repeated a grade at least once, meaning they already have academic challenges and a tenuous relationship with academics.

“You have to learn basic literacy and numeracy skills at specific levels, and you cannot delay that’’

The impact of the rotational learning model has also resulted in more learners than usual dropping out of school, due to their anxiety at having missed out on too much of the curriculum and struggling to catch up. Rotational timetables also slow down learning; the disruptions in the school week have been shown to affect students’ ability to absorb and recall what they have learned. 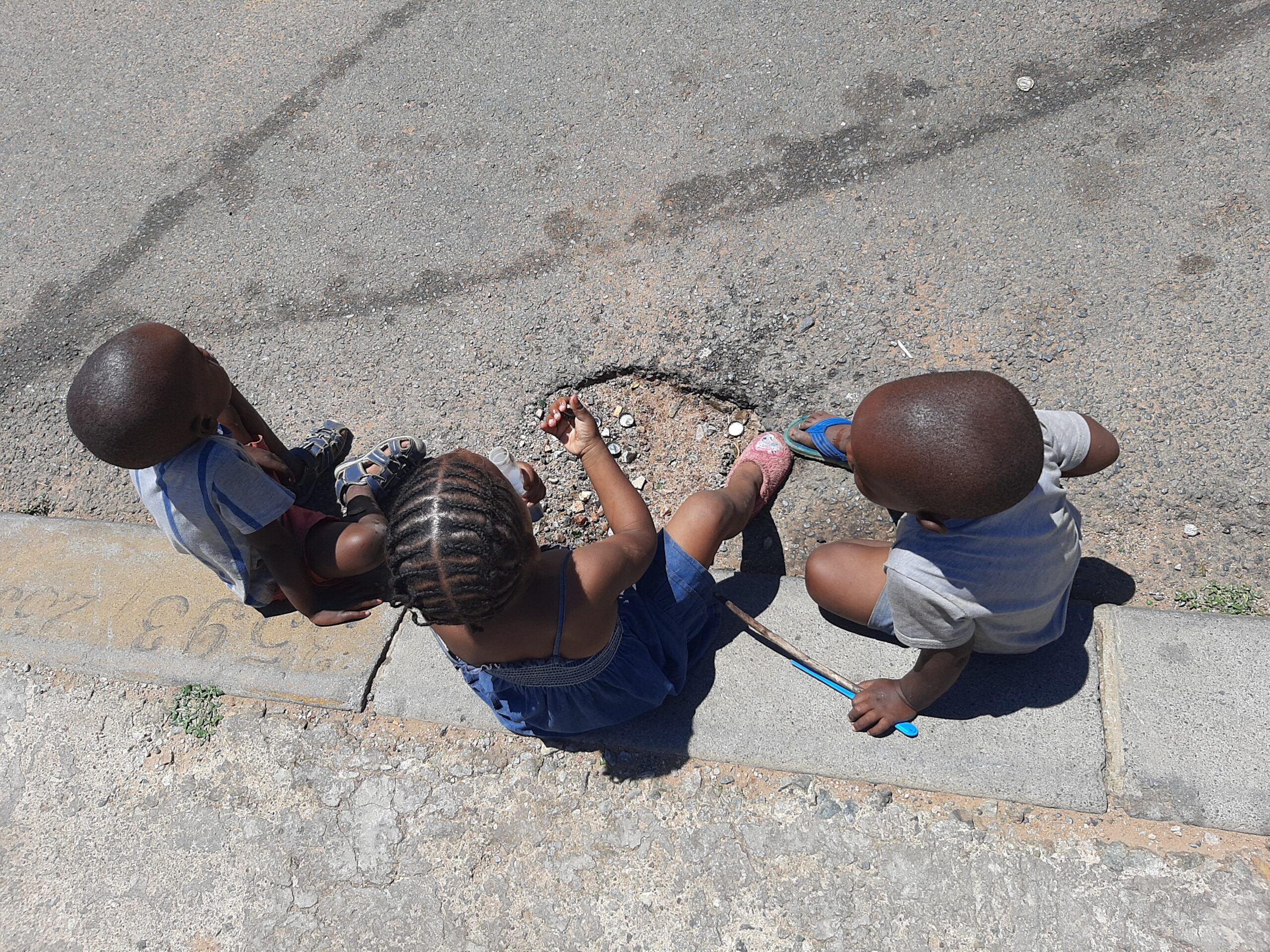 Three young kids from Orlando East sitting in the sun and playing with a water bottle. All three kids are in grade 1. And their parents are shack dwellers in the same yard. Photo: Ntando Ximba

The damage extends further than just academic capabilities. Data from around the world shows that learners who miss school for significant lengths of time will earn on average 5% less in their lifetimes compared to previous generations. This is according to leading economist at the World Bank, Joao Pedro. In addition, since the start of this system of learning, pregnancy and HIV rates have increased, indicating that not being in school puts young girls at risk of sexual abuse and a disproportionate amount of household labour.

Mozo* (17) was in grade 11 at Orlando High in Soweto when schools were closed for the first time in March 2020. At first she spent her days doing basic household chores and then spending time with her friends. Soon after the rotational model started, she would spend her “free time” with her boyfriend, an unemployed 23-year-old from the neighbouring Noordgesig area. It was not too long before she fell pregnant and started missing more school outside of normal rotational learning.

As Mozo expected, she failed grade 11. “I was not expecting to pass, anyway,’’ she says. ‘‘Once this whole thing (covid-19) is over, I will go back. I am still young, anyway.” On February 8, 2021, Mozo gave birth to baby Khutso, and since then her life has been mired in house chores and caring for her child, with the aid of her family.

The disadvantaged position this group of learners has been put in by such learning losses will also translate into ‘‘small differences in skills translating into notable differences in lifetime earnings, and other measures of wellbeing’’, according to University of Stellenbosch educational expert Prof Martin Gustafsson. He says the most damage we have seen has been at lower primary level.

“You have to learn basic literacy and numeracy skills at specific levels, and you cannot delay that,’’ he says. ‘‘Foundations are where everything starts, and not having the right skills will mess up the rest of your education.”

Gustafsson says there is virtually no country that has not experienced disruptions in education: “Latin America has had far greater losses than Africa in general, and this is not a uniquely South African problem.’’ According to him, we need to move away from the notion of catching up, because that has become impossible.

“What we can do is emphasise the fundamental subjects such as languages, mathematics and literacy, because these are not content subjects but are deep skills subjects,” he says. “Missing out on content here and there is not such a big problem, but missing out on deep skills is more deeply damaging.”

Busisiwe Thwala, a teacher at Madibane Secondary School in Diepkloof, Soweto, where learners are divided into two groups and rotational learning is implemented on a one-day-in, one-day-out cycle, suggests this has made her life easier because her classes are smaller and easier to manage than before. Thwala says it has also made it easier to interact with and teach the learners, especially given that her classes historically tend to be overcrowded, which makes it hard to engage them.

“The major disadvantage is that we fall heavily behind with the curriculum and sometimes we don’t do justice to [the curriculum] because we are forced to move as fast as we can to try and keep up”, she says.

According to Thwala, some of her learners have used the rotation as a scapegoat to skip school and miss their academic deadlines.

Schools also provide access to critical services beyond just education. Missing out on school does not only affect the academic prospects and earning potential of learners, but for most of them school is often the place where they get what is sometimes their primary source of nutrition. Roney Mathe*, a school principal at a secondary school in Orlando East, Soweto, says, “The school provides the kids with two meals a day; instant porridge in the morning and a hot meal for lunch. On Fridays we also add some fruit with the lunch.” He went on to say that sometimes the school, at its own discretion, can provide any surplus food to needy students to take home.

According to Mathe, when kids miss school because of rotational learning, they may also lose out on their daily nutritional intake, which can have detrimental effects on learning and development in the long run.

Parents have also felt the impact of children staying home when they should be in school. Nelisiwe Nkosi, a mother of a 14-year-old girl and nine-year-old boy, told Wits Vuvuzela, “My children struggle to understand that time off school must be spent studying and doing schoolwork. They take it as a weekend.” She added that her children spending so much time at home puts a strain on her because she must constantly monitor the kids and work at the same time.

Nkosi also fears that once she returns to working from the office full-time, there will be nobody at home to keep tabs on her children because she relies on the school for that. “If I hired a helper and paid her extra it would help, but things are tight right now and there isn’t enough to go by,” she said.

With a Gini coefficient of 0.63, South Africa logs the highest economic inequality in the world. Part of this is because of the country’s troubled past, which over the past few decades has been compounded by poor governance and a policy framework not conducive to economic growth. From various studies conducted on education since the start of the pandemic and quoted in this article, children in poorer households are disproportionately affected by the missed learning opportunities.

According to Nids-Cram, as many as 10% of South African adults report that at least one school-going child in their household had missed school or not returned to school in 2021; something strongly related to parent worry, household location and poverty status.

The long-term impact of the academic challenges faced by this group of learners remains to be seen, but there can be no doubt that it has had a negative outcome on the learning abilities of learners, exposed social inequalities and proved that there is much to fix in the country’s basic education model.

“Until we get equality in education, we won’t have an equal society.” — Sonia Sotomayor

* Not their real names