Although universities say their dropout rates have not increased during the covid-19 pandemic, students are still struggling with learning.

Sarah Wilmot (25) was more than a year into her master’s degree in biochemistry at Rhodes University in Makhanda, Eastern Cape, when covid-19 hit South African shores in March 2020. The overwhelming nature of her degree, along with the uncertainty that came with the pandemic, became too much for her and she dropped out at the beginning of 2021.

The student dropout rate at South African universities has been a cause of concern for many years. Although there are no officially released statistics of university dropout rates for 2020 and 2021 as yet, Wits Vuvuzela spoke to students such as Wilmot, who decided to drop out due to the many difficulties that came with remote learning and studying during a global pandemic.

“I could tell I was [too] stressed, because my period stopped for the first time in my life. My hair was falling out, I was either eating nothing for weeks or eating obsessively for days, I was sleeping four hours a night. The physical manifestations made me realise how bad it was”

Despite the conversation having a serious undertone, it was not enough to dim Wilmot’s bubbly personality, and she does not seem to regret her decision to drop out.

“The decision came down to the fact that my physical and mental health were deteriorating rapidly, and continuing would just be detrimental to my health in all ways,” she says. “I decided to choose myself and not the degree.”

Wilmot, now a clinical research associate in Sandton, told Wits Vuvuzela the transition from face-to-face learning to remote learning was difficult, leaving postgraduate students like her confused and frustrated.

“I was in the middle of a very expensive lab experiment and had to just stop (due to her lab being shut down),” Wilmot says.

When covid-19 forced the country into lockdown, it brought a strain to all education institutions, as they were forced to close their doors when South Africa’s hard lockdown commenced in March 2020.

A few months later, universities returned remotely, and students’ lives were rocked when they were forced to adapt to their new normal of remote learning for most of the 2020 academic year. Remote learning, however, proved not to be the answer for many students, including Wilmot. Her degree was lab-based, making it impossible for her to continue her work. 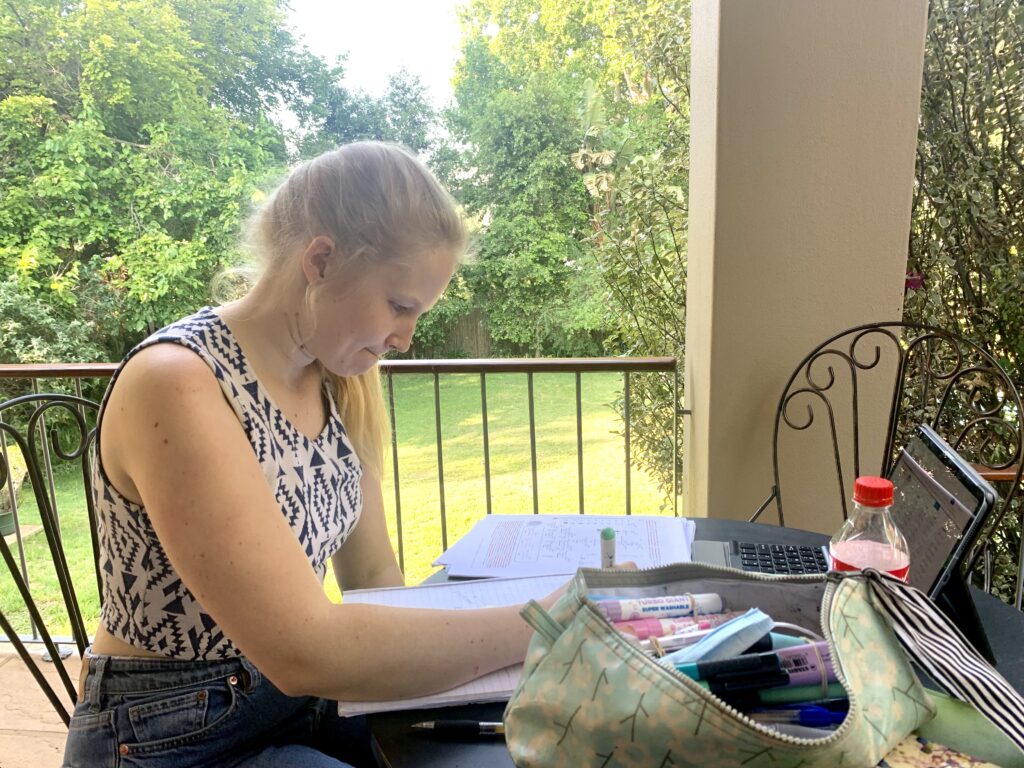 Unlike most students, Wilmot’s degree was lab-based, meaning there was not much work that could be done remotely. This left her feeling anxious about her studies. Photo: Tshiamo Moloko

“There was no resolution to the issues I was facing – they were too insurmountable,” she says. She continues, saying that once her lab work stopped, little was able to be done on her part, leaving her feeling anxious because she did not know what was to come.

According to research conducted by the department of higher education and training, released in its annual report for 2019-20 in February 2021, students find learning in distance mode more challenging compared to contact mode.

The research, conducted over a 10-year period from 2009 to 2019, found that of the students studying in distance mode, only 16.3% graduated after six years of study and 26.7% after 10 years of study. This is a drastic difference compared to students learning in contact mode, with 17.5% of students graduating after three years, 60.7% after six and 68.7% after 10.

“There was a lot of pressure [in the degree] already,” Wilmot explains, as the beginning of lockdown drew closer. The uncertainty about how long lockdown would last caused Wilmot, who already describes herself as a highly strung person, to become even more anxious about her already difficult master’s degree.

“I could tell I was [too] stressed, because my period stopped for the first time in my life. My hair was falling out, I was either eating nothing for weeks or eating obsessively for days, I was sleeping four hours a night. The physical manifestations made me realise how bad it was.”

Wilmot is not the only student who has found it difficult to cope with remote learning at university during covid-19.

Monica Bylos (22), born and raised in Johannesburg, decided to drop out of her honours degree in journalism and media studies at the University of the Witwatersrand (Wits) in 2021 after suffering a brain injury that affected her memory and ability to study. She explains that keeping up with her degree and tending to her health caused her too much stress, and she ultimately decided to take the time to properly heal from her injury and re-evaluate her life plans. 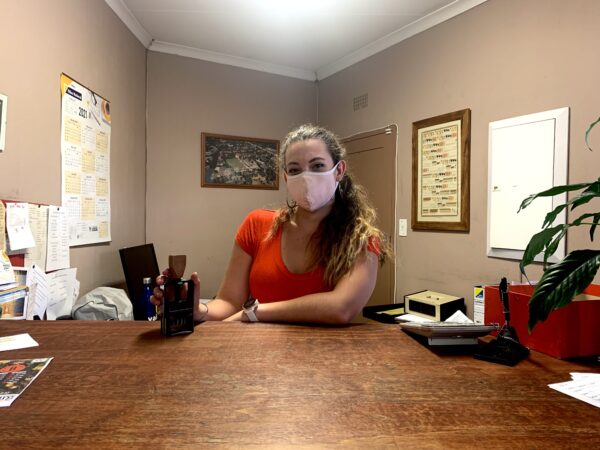 After dropping out, Monica Bylos decided to take time to heal from her brain injury and gain some work experience. Photo: Tshiamo Moloko

“[Last year] I decided to continue with my exams as usual, and [after the accident] my marks dropped considerably,” Bylos explains. With that being said, Bylos actually believes that remote learning helped her, saying that having more time to complete her exams kept her from pushing herself too hard.

Although Bylos successfully completed her undergraduate degree in 2020, her honours year proved to be more challenging. She explains that she was worried she would not be able to keep up with the pace, which caused her ample stress.

“When I actually saw how much my brain injury had affected me (and my studies), was when it took me seven hours to complete one of three readings. At the end of it I could not remember anything I had read.”

Virtual learning has also been particularly difficult for first-year students as they transitioned from high school to university.

Refiloe* (22) dropped out of Varsity College at the beginning of 2021 after completing her first year, where she studied a BA in corporate communication.

Now a freelance artist in Johannesburg, she says she decided to enrol at Varsity College at the beginning of 2020 to appease her mother, although she found university too formal and mentally draining.

She explains to Wits Vuvuzela how she fell into a deep depression during her first year. She says she felt forced to attend university by her family, who to this day do not even know she has dropped out.

“I was raised by a generation who believe that if you drop out [of school] your life is over because you cannot do anything without education,” Refiloe says.

Aside from this, Refiloe found that the institution failed to assist its students to successfully learn online.

Refiloe believes there was not enough support for every student, explaining that when everything went digital due to the pandemic, some students were not helped with access to personal laptops or data, leaving them to fend for themselves.

“The system they had [set up during the pandemic] was not for everyone,” she says. “We were paying tuition fees, but we did not have many resources. There was no balance.”

For Refiloe, it felt as though Varsity College’s primary aim was simply to finish the academic year.

Dr Gill Mooney, dean of academic support and development for the Independent Institute of Education (IIE), which houses a number of higher-education institutions such as Varsity College, Vega and Rosebank College, indicated that their dropout rate has been on the decline over the past five years, and continued to decline in their 2020 cycle.

“It is interesting that at Wits we had fewer students dropping out in 2020 than in previous years,” says Prof Ruksana Osman, senior deputy vice-chancellor and a professor of education at Wits. She explains that Wits faculty advisers and Wits student affairs made sure to reach out to students who were not engaging fully, or were getting low marks.

Osman understands, however, why students have dropped out during the pandemic, particularly first-years, because the transition from secondary to tertiary education can be difficult.

“The schooling system in South Africa makes it especially difficult for our students,” she says. “In many schools, learners are drilled on how to pass exam questions and a lot of time is spent on revising a small amount of subject matter. At university, the pace and difficulty of the academic courses is much greater.”

Taonga Phiri, secretary general of the Rhodes University SRC, says learning during covid-19 brought new challenges for student academic experiences, with students dropping out due to lack of student-lecturer engagement.

“Most students describe their academic experience over the past two years as overwhelming and extremely demanding,” he explains. Phiri says that prior to the pandemic, students were encouraged to engage with the contents of their modules, due to lectures being face to face.

“[Now] students find it difficult to adapt to a new norm, which has led to a challenging and exhausting experience.”

According to an academic research article written by Nhlanhla Linda, Sindiso Zhou and Newlin Marongwe, published in May 2021 which focuses on the strategies two universities in Eastern Cape took to help students during covid-19, many students found the challenges of self-supervision and self-study a constant struggle throughout the pandemic.

The study also found that students were “overwhelmed because they were presented with too much information without a ‘human face’ to explain or provide assurance”.

Phiri echoes the findings in the study. He says many students de-registered from Rhodes University due to feeling overwhelmed and not understanding the course work they had been given.

“The Rhodes SRC 2020 tried their best to ensure no student dropped out due to a lack of equipment by advocating that ‘no student is left behind’,” he says. He adds that Rhodes University worked hard to provide students with equipment such as laptops, course materials and data.

“The positive is that students were given the opportunity to engage with course work at their own pace,” he says. “The negative is that more challenges arose. Some students felt they were given more content than their capacity. This resulted in students not properly engaging with all their course work, but rather chasing deadlines and submissions.”

Research conducted by Herkulass Combrink and Lauren Oosthuizen at the University of the Free State (UFS), published in April 2021, further highlighted the difficulty of transitioning into university, particularly in the first six months of first year.

The study says students transitioning into their first year found that factors such as face-to-face interaction with lecturers and other students, as well as access to resources and university facilities, assisted them with their transition into university.

“It would help if, for at least some of the time, students could be placed in groups, either with a lecturer or a tutor, to offer support when a student is struggling,” Osman says. She believes that mentors and peer groups can help students feel a stronger sense of belonging during this time.

Phiri agrees, explaining that the division of student affairs at Rhodes University established a mentorship programme for first-years to help them settle into university during the pandemic.

“These mentors are expected to provide their mentees with academic advice, as well as assist them in coping with academic life, especially during a pandemic,” he says.

Ansilla Nyar, director of the South African National Resource Centre for the First Year Experience and Students in Transition (SANRC), adds to the conversation about more support for students during covid-19.

“This pandemic has had the effect of giving all our universities a reality check,” she says. “We really need to be actively supporting students at every stage.”

Nyar also believes a mindset change for South African universities is extremely important, emphasising that students should be put first and made to feel that they belong.

A mindset change might have made all the difference for students such as Wilmot, Bylos and Refiloe.

“It [the pandemic] has put the spotlight back again on the students, and just hearing and understanding their issues a little bit better [allows us to help],” says Nyar.

FEATURED IMAGE: University students have found learning virtually during the covid-19 pandemic stressful, leading some to drop out of their degrees. Photo: Tshiamo Moloko