The lockdown of tobacco and the costs of lighting up

In March 2020, South Africa imposed a tobacco ban as part of the country’s response to curb the spread of covid-19. This resulted in various behavioural changes among young people, some evident even in the aftermath of the ban.

The tobacco ban was only the beginning of South Africa’s fight against covid-19. While research shows there was a significant decline in smoking during the initial lockdown, the behavioural changes in young people and health and hygiene risks of tobacco use are issues that are still being dealt with.

South Africa was one of only three countries to include a ban on the sale of tobacco products in its initial lockdown regulations. The ban was put in place to decrease the demands on the health system and severity of the virus among smokers. The ban lasted five months, from March to August 2020, despite being lifted for short spells in between. This was the longest- standing ban on tobacco in the world, with India’s (six weeks) and Botswana’s (six weeks) being significantly shorter.

According to research in international journal Tobacco Control by the BMJ, there was evidence that the lockdown achieved the fastest rate of decline in cigarette smoking prevalence in South African history.

It also acknowledges that the ban was unexpected and created both opportunities and challenges for tobacco consumers. Some smokers changed their consumption levels by quitting smoking, while others managed them by engaging in illicit trade of tobacco.

For instance, NWU second-year information systems student Az Malek (20) believes the ban enabled quitting behaviour in young people: “If I speak from experience, I can tell you that the tobacco ban really had people surprised. I personally am not a big smoker, but as someone who does smoke socially with friends, I can tell you we did stock up on a few packs in preparation for the ban,” he said.

“It was a carton that we bought for our weekend meets, and after the ban got extended we were definitely made to cut down. I think the lockdown did me good, to be honest. I was worried about getting the virus bad, so a lot of the time I chose not to smoke. I had no withdrawal symptoms from cutting down and while I didn’t quit completely, a lot of my friends actually did, and have not resumed up until now. And that’s all thanks to our government,” Malek said. 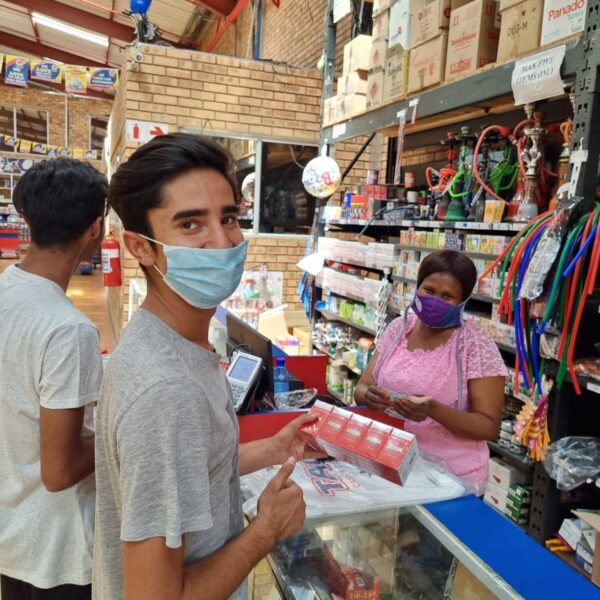 Az Malek is a social smoker who stocked up on a carton before the ban. Photo: Razeen Gutta

Despite inconsistent estimates due to the samples not being adequately representative when surveys were conducted during the lockdown, Tobacco Control found that in the four surveys conducted, between 16% and 49% of South African smokers reported quitting during the ban. The studies were all conducted between March and August 2020 using non-probability sampling with participants aged 18 and above.

The previous decline in smoking in South Africa occurred between 1994 and 2012, when in an 18-year period 2.4 million people quit smoking. This represented a 0.9% annual fall when compared to a reported minimum of 16% in the space of the five-month tobacco ban.

When looking at the importance of these statistics, South African Medical Research Council (SAMRC) specialist scientist Dr Catherine Egbe told Wits Vuvuzela that relapsing is very possible. “Recurring surveys are still being done to see what the actual quit rate was, but as of last year it was around 16%. I wouldn’t want to say that smoking is a relapsing condition, but because we know that smoking is a very addictive behaviour due to the nicotine, there is a high likelihood that those who quit during the lockdown may relapse,” she said.

Rhodes first-year BSc student Ambrose Kibowa (20) said relapsing was easy once the ban was lifted: “Yes, it’s easy to say that I quit during the ban. If you asked me at the time, I would have said yes, I did [quit], because there was no legal way of buying any tobacco at the time. But what about after the ban ended? The cravings don’t just leave, especially if you don’t quit willingly and you’re forced to because sales stop. You’re just waiting for it to be available again, so relapsing becomes really easy.

“The only reason I stopped was because I was forced to, and after smoking four or five cigarettes a day I somehow took a six-month break from smoking. I adjusted to that without too many anger issues, but I definitely craved them. What was on my side was that I knew that once it would be available again, I would start again. Now I’m back to my usual four to five a day,” Kibowa said.

The reason for relapsing depends a lot on quitting mechanisms, notes Egbe: “We know from our research that if you use therapy to quit, the likelihood of relapsing will reduce. That has nothing to do with whether the ban was lifted or not; it has to do with the person’s own behaviour. Because apart from the addictive nature of nicotine, it also has this classical conditioning theme.

The average age at onset of tobacco smoking in South Africa is 18 years old, making the changes in behaviour of young people during the pandemic an even more important conversation.

University of Pretoria computer science honours student Abubakr Kharbai (21) believes the ban had an effect on more than just quitting behaviour: “Yes, some people quit and others made money by buying and selling cigarettes illegally, but there’s more to it. What about the mental fatigue, anger and aggression that people had to go through as a result of this ban?

“I only smoke shisha, so it was much easier to stock up on flavour as it is not a daily addiction. However, I know people who suffered. I could see the anger and frustration in the eyes of friends who could not afford to buy cigarettes illegally. Taking something away from people which they have had daily for years was very dangerous. Not just for them, but for the ones around them who often had to bear the brunt of their withdrawal symptoms as well,” Kharbai added.

Wits third-year education student Zeenat Mahomed (20) concurred: “I had anxiety. I mean I think everyone did because of covid, but when you’re used to something for so long and it suddenly gets taken away from you, it’s hard to go about your day normally without it. I don’t think I realised how dependent I was on smoking until it was taken away. Mood swings were a big thing for me and a lot of binge-eating, too. I had a lot of cravings and ended up indulging in other things. I was really irritable.”

Egbe says the onset of smoking plays a big role in trying to quit for good: “So withdrawal symptoms happen to all those who are addicted to nicotine, but we have seen that the earlier you start, the more difficult it is to quit.

“Maybe one could explain that biologically, because nicotine affects the brain and becoming accustomed to it at an early age almost changes the pattern the brain uses to get used to the addictive substance,” Egbe added.

Currently, World Health Organisation (WHO) research shows that the average global tobacco smoking population aged 15 years and above is 21% and that South Africans aged 15 and over reported past-month tobacco smoking as high as 31.4%.

This shows that the age at onset of smoking is an important factor when looking at smoking behaviours later in life. This is even more important now among South African youth, as the impact of the tobacco ban last year has the potential to alter the statistics for years to come.

According to Egbe, the health risks because of covid-19 did not stop with the ban: “There were various issues we tried to raise when educating the public on the importance of the ban.

‘‘It’s just that we have a very high level of tobacco industry interference in South Africa. Using hookahs in public, for instance, in the time of covid, and sharing pipes with people in communal gatherings, is like signing your own death warrant. I mean gatherings on their own were already a problem, but now using the same mouthpiece. It’s dangerous to share hookahs, it’s dangerous to even share cigarettes,” she said.

“If someone has covid, you’re basically just passing it around. Some people say okay, no, I’m smoking e-cigarettes and it’s not that bad. But what about when you puff out the smoke? What happens? I mean we are trying not to exchange droplets or let the air within you be taken in by another person, but here you are puffing into the air. These are the issues that we hope people will really get the message about.”

Restaurant owner Azeem Amod (34), of Jimmy’s Killer Prawns in Johannesburg, told Wits Vuvuzela the pandemic brought worries for tobacco users and the restaurant industry even after the ban was lifted.

“The initial rumours of the tobacco ban just before it was announced had everyone worried. It was quite a ride, really – because at first I stocked up on cigarettes and didn’t have many issues, but when the ban got extended it became a bit more difficult,’’ he said. ‘‘I saw it as an opportunity to quit, stopped for three months and then eventually started again. It was after the hard lockdown when we could open the store again that I really noticed how smoking had become such a taboo thing to do, though. 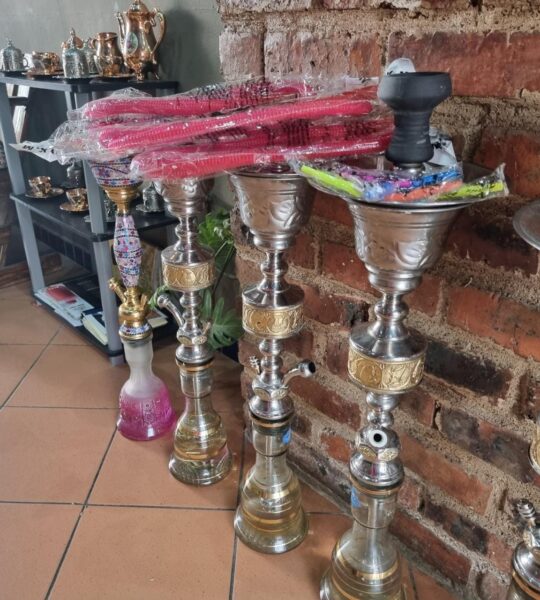 “When I used to smoke in the car on my way to work, I would get strange looks from people driving next to me. At the restaurant we serve shisha, and usually attract a lively student vibe for that. But honestly, once we reopened the shisha sales were almost non-existent. I think people were scared about sharing pipes with each other, and understandably so,” Amod said.

The risks of sharing shisha pipes had to be managed by restaurants and individuals alike, and according to Amod this was one of quite a few precautions that restaurants had to take: “If we look at the shisha side of things, then bringing disposable pipes and individual mouthpieces into the equation was the first thing that had to be done.

‘‘Health inspectors pay close attention to the sanitisation and use of pipes, as much as they do to the food side of things these days, and at the end of the day of course we want to keep our customers safe,” he said.

“Another thing, which may seem obvious, is social distancing. Even once we were allowed to operate at full capacity, it was important to keep those smoking at a safe distance from our other patrons. We have an outdoor section where we allow smoking of shisha and cigarettes and our waiters are trained to sanitise ashtrays and wear gloves when picking up cigarette buds,” Amod added.

The tobacco ban was only the beginning of South Africa’s efforts to curb the spread of covid-19: There is still much to be wary of.

FEATURED IMAGE: In March 2020, South Africa imposed a tobacco ban as part of the country’s response to curb the spread of covid-19. Photo: Razeen Gutta