The Electoral Commission of South Africa (IEC), in collaboration with the University of the Witwatersrand and the Wits SRC launched a voter registration campaign targeting tertiary institutions on Tuesday, March 22. The campaign, which will run until September 2022, is aimed at using a non-election year to teach and encourage the youth to vote and to demystify any myths that students have about elections.

The launch took place at Wits in line with the IEC decision to start the campaign in Gauteng where its national office is located. According to Moagisi Sibanda, the general manager of the campaign, “the Wits SRC was the most radiant, most willing to participate student body”.

SRC deputy president Lesego Louw said they welcomed the chance to understand why young people do not participate in their democracy, as the problem is also prevalent in SRC elections.

“The more we engage students, the better we can reflect and try to solve those issues that they might be bringing up as reasons why they are not participating in their democracy.”

Although the project was launched at Wits, Sibanda says activities and activations by the IEC can be expected in different campuses countrywide. 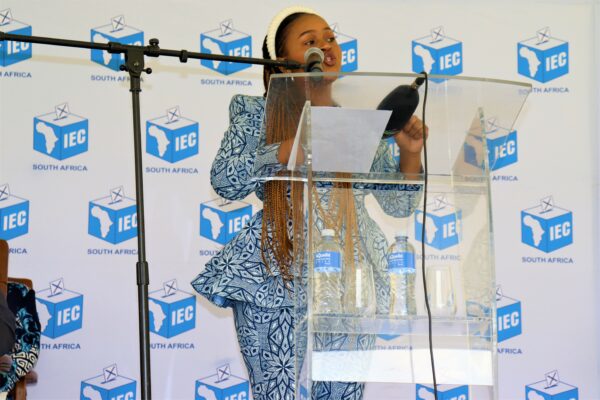 “We will have many activations on campuses, mainly our colleagues dressed in IEC t-shirts engaging students, helping them register for the next election and educating them on how elections work,” she said.

Sy Mamabolo, the chief electoral officer of the IEC shared with the crowd that in the 2021 local government elections,18- and 19-year-olds made up 71% of the voter participation. This was larger than the general voter participation of about 46% nationally. This means the majority of the voters in the election were 18 and 19 years old.

Melissa Moss (23), a second-year bachelor of architectural studies student, told Wits Vuvuzela that she had never participated in elections before. “It was because of not knowing enough but also not taking initiative to know about voting,” she said. However, after attending the launch, her outlook on how voting has an impact on democracy has changed.

“This sounds clichéd but your vote is your voice, it makes a difference, and I think it is cool that this launch made me want to vote for the first time in my life,” Moss said, with excitement.

FEATURED IMAGE: Members of the IEC in a tent set up to assist students with any queries related to voting and the IEC. Photo: Semakaleng Motsoere