From the Wits Vuvuzela newsroom to one of the most watched investigative shows, wits graduate gains recognition for ground-breaking work

Former Wits Vuvuzela student, Jabulile Mbatha, has taken the niche field of investigative journalism — which is often dubbed as a challenging branch of storytelling — head on and is increasingly becoming a household name.

In November 2021, the 25-year-old won the young journalist of the year award at the Vodacom Journalist of the Year Awards for her investigations into fraud at the Road Accident Fund, mob attacks in Zandspruit and employee abuse at ZZ2 fruit farms. The latter, together with the liquor license fraud story where she bravely door-stopped a police officer who had been selling fake licences, also earned her a nomination at the Taco Kuiper awards in 2021.

Mbatha began her journalism journey in 2019 when she was a student journalist pursuing her honours degree qualification. She then took on the role of an intern on Checkpoint, an investigative current affairs show on news channel eNCA.

Reminiscing on her time as a student journalist, Mbatha admitted that she pondered on whether the high-pressured industry was for her.

“[I’m glad] the universe intervened before I could make the mistake of quitting journalism,” Mbatha said, in reference to her bagging an internship right after her studies.

Growing up in Soweto and subsequently in Boksburg, Johannesburg, the award-winning journalist was exposed to daily news consumption as her father read newspapers often and her mother listened to the radio all day. 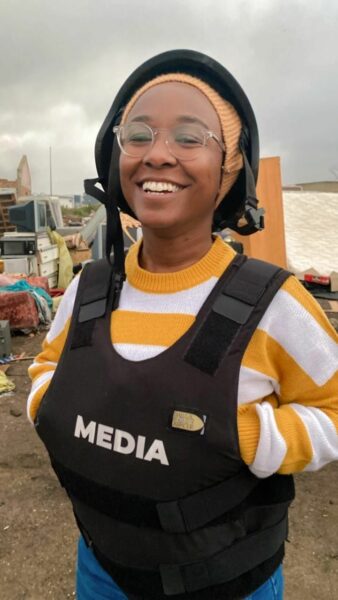 However, like most children, she did not enjoy this, but with time, current affairs shows like Cutting Edge piqued her interest. When her father saw this, and considered her talent for poetry writing, he steered her towards journalism in her matric year.

With almost 30 investigative stories produced so far, Mbatha still approaches each story with as much vigour as her first. Reflecting on it, Mbatha said “It took me two months to finish. There was so much reading I had to do and at times, I really doubted myself”. With the notorious ZZ2 story, Mbatha said what started as an email tip-off from one of the employees ended up taking her on a field quest to gather as many case studies as possible to charge her interview with the company management.

She prides herself in being able to brave intimidation from public officials and big shots because she believes that: “I’m what is needed for those people’s voices to be heard”.

Speaking about gender-based violence as one of the social justices causes that she is most passionate about, Mbatha said she feels they, “are stories that just need to be retold over and over again until society is moved, criminals are shaken and people with dirty minds compelled to change”.

Remembering her as a student whose presence was felt in her class, Wits journalism and media studies lecturer, Lizeka Mda said Mbatha had always jumped at the opportunity of speaking on behalf of other students.

Although Mbatha did not meet the requirements for her journalism honours qualification, she went back to academia in 2021 to obtain an honours degree in media studies.

“She is a good example that what you are at some point in your life doesn’t define who you’ll become [in the future]”, Mda fondly said.

Acting director of the Wits Centre of Journalism, Dinesh Balliah who was the course convenor during Mbatha’s year commended Mbatha for using journalism to drive her passion for social justice.

The tenacious journalist plans to explore more of her capabilities by tapping into news reporting, radio journalism and writing.

Mbatha advised student journalists and people wishing to pursue a career in the field to “keep the passion alive, work on a story until you have something ready. Don’t pressure yourself for deadlines.