Nadav Ossendryver (25), the man who made wildlife spotting a virtual and communal affair, is looking towards global expansion now that he has bagged his first degree from Wits University.

Ossendryver, aged 15 at the time, was frustrated by not seeing exciting wildlife sightings on a family trip to the Kruger National Park in Mpumalanga. This is what sparked the idea for his mobile application, Latest Sightings.

He learnt to code a basic app, came up with the name and put it on the app store in just under a month. He did not expect the company to be as big as it is today, as he developed it to have some fun and see some members of the Big Five.

The nature lover was born in Israel and moved to South Africa when he was eight years old. His first holiday with his family after moving to South Africa, was to the Kruger National Park. He recalls how his family spent four days desperately looking for lions, eventually finding them in the last minutes of the trip. After that, he became addicted to the adrenaline and excitement of finding that special sighting. His singular goal, on future trips to the Kruger, was finding ways to “maximise” the holiday with rare sightings. His app then became the solution. 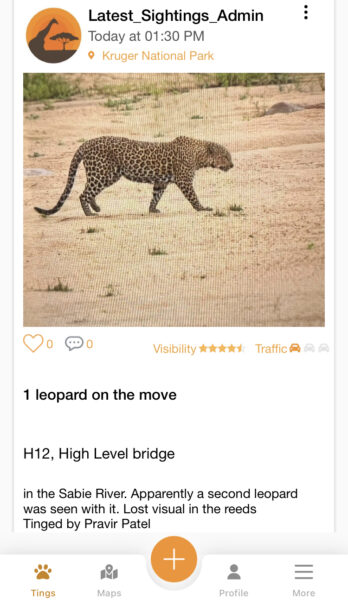 As of May, 2022, the company has six employees and a massive online following. Latest Sightings has a YouTube channel with 2.76 million subscribers, where rare wildlife sightings seen in Southern Africa are shared from contributors across the globe.

Ossendryver says that anyone can be a contributor, you just have to submit your story and they will review it. Linda Ann Stedman from Benoni, said: “We love watching the rare YouTube videos as you see something you otherwise would not see.”

Sarah Oxley, an employee at Latest sightings, says it is easy to work with Ossendryver as he is a calm person, but he is also really passionate about the work he does. Oxley says she appreciates his understanding when you make a mistake. Stedman, who has worked voluntarily for Latest Sightings told Wits Vuvuzela that “Nadav really believes in what he is doing.”

Regular users of the app say it has enhanced their experience in the park. James Stroud from Magaliesburg, says planning his route based off of previous sightings has really improved his chances of seeing particular animals. Friedrich von Hörsten, another regular user said the app helped him do research of animal movements for his photography.

On conservation in South Africa, Ossendryver said: “The growing poverty around the parks cause a lot more risk of poachers being enticed by high pay-outs to go and kill an animal.” Latest Sightings helps out with data on where animals were last seen, in which area and possible injuries to help authorities fight poaching. Ossendryver says “it is amazing to be a part of [saving an animal].”

The young tech developer just completed a Bcom part time degree, which is his first degree. He did this degree to give himself a background of how businesses work. “It is always huge to be educated…The more you study the more you are forced to learn how to think,” said Ossendryver. His advice to Wits students is “find something you need or want, that would change your life and just do it.”

Ossendryver hopes to expand through use of the platform in parks around the world.  At the moment the company is working on a new app for technical enhancements.