Wits’ near-draw sticks it to Wanderers

The youthful Wits men’s first team hockey spent no time wandering when they faced the mature 2021 champions, who scored the match’s only goal.

The Wits University Hockey Club’s men’s first team lost 1-0 when they faced Wanderers in their fourth match of the Johannesburg Premier Hockey League. The Wits side tried to hold their own against the more experienced side, but fell short.

Wits’ coach, Ricky West (37), considered his team “underdogs” against the 2021 League champions at Wanderers’ home astroturf, The Wanderers Club. Wits hoped to “create an upset,” said West, but instead tasted defeat just minutes before the final whistle during the tight game on Thursday, May 19, 2022.

Wanderers managed the first of the match’s several short corner advantages, with just three minutes on the clock. A short corner advantage is awarded if the defending side commits a foul in the dee (semi-circle around the goal box). Wanderers failed to score, to which captain, Stuart Spooner (34) said: “we created a lot of good opportunities like short corners… that we didn’t manage to convert.”

The second quarter started with an empty scoreboard and both teams a player down. Wits’ Cameron Fullerton (21) and Wanderers’ Ross Maharge (26) warmed the bench after receiving green cards for intentionally fouling or slowing the ball (breakdown tackle) at the end of the previous quarter.

Wits attempted two shots at goal in the 22nd and 29th minutes respectively, however, failed to score and captain, Bradley Riley (23), admitted that the team missed several opportunities. Wanderers replied with two missed shots in the 40th minute. 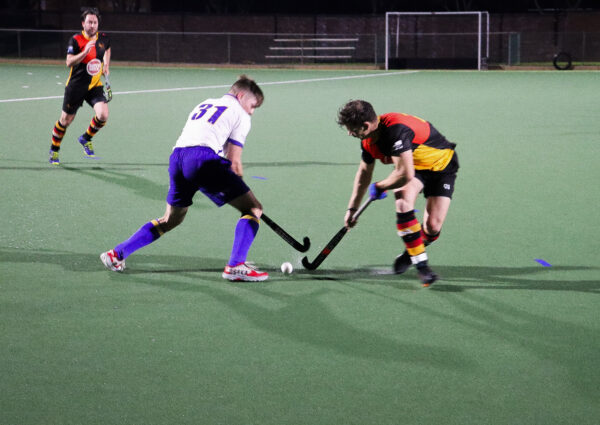 The fourth and final quarter started with a pointless scoreboard, but spectator Taine Elliot (21) said that this quarter’s heightened intensity made it the most exciting. The several short corners awarded in this quarter alone showed the teams’ determination.

The reigning champion’s Mark Walraven (30) scored his first goal of the season to secure Wanderers a win in the 57th minute. “Their goal was… weak from us,” said Riley, but Wits responded by pulling off goalkeeper, Reece Govender (20), and sending on another field player in hopes of equaling the score.

Wits failed to level the score, despite their short corner advantage with one minute on the clock, losing 1-0 to their opposition. Wanderers’ coach, Patrick Owgan (39) said his team’s win was “hard fought… in [the] balance of play it deserved.”

Umpire Richard Dinkelmann (30) said, “the scoreboard doesn’t actually reflect the game… [which needed] four goals each way”. He also congratulated the goalkeepers on keeping a 1-0 score.

Competitiveness did not erode the camaraderie between the teams, with players exchanging banter on the side-line. The teams share a positive relationship, with many Witsies joining Wanderers post-studies, said West, himself having played for the team.

The score reflected Wits’ matches last season, where they lost 3-2 and 1-0 to Wanderers.

The university team won their match on Sunday, May 22, after Beaulieu forfeited in the last five minutes, and have four matches left to better last season’s fourth place finish.