Students promise to donate blood in future campaigns, as long as they are informed about them.

Lack of advertising by the South African National Blood Service (SANBS) has been flagged by some Wits students as the reason for a low turnout at the week’s blood drive on Wits campuses. However 51 people still donated blood while 21 were turned away for various reasons at Solomon Mahlangu House on Tuesday, May 24.

Tshembho Nkuna, a fourth-year bachelor of education student said he did not know the SANBS was on campus this week but said he would go in future. “I am scared of the needle but I would go through the challenge.”

Another student who has never donated and did not know SANBS was on campus this week, Ezra Mogale, said, “I have never had the opportunity,” and went on to say that he would love to donate. Augustine Kelebogile, a first-year actuarial science student, said he had seen the SANBS flags but did not know where the pop-up stand was. However, he was also keen to donate saying, “I would love to do it.”

Kamantha Pillay, the donor relations practitioner for SANBS, said the number of donations this week was roughly half what they used to get on campus before the pandemic. “Pre covid-19, we would procure 100 units of blood on the first day.” The turnout this week was 110 people over the first two days of the clinic as 59 had donated on Monday.

People were coming through “in dribs and drabs as the day went on”, according to Bheki Mnguni, a donor care officer for SANBS. 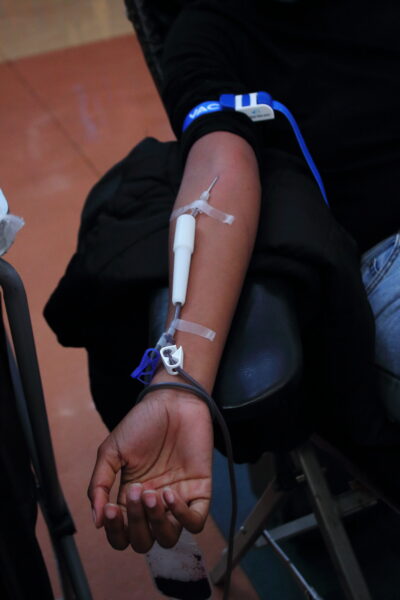 Pillay said she had “liased with the [Wits] communications department and Vow FM to publicise the event”, however, Patients donating blood said that they knew about the stand through SMS texts and calls they had received from the SANBS.

Those who turned up to give blood told Wits Vuvuzela that social media was the best way to let people know.

Refilwe Kome, a regular donor and third-year BCom accounting student, said “Promote through social media.” She also said people needed to talk about the misconceptions of blood donations and not be scared. Hemil Gopalan a donor for the first time, said those that had donated should post on social media so others would see what was happening on campus.