REVIEW: From Koe’siestes to Kneidlach makes a family friendly return

A good laugh, but an even better message in Chantal Stanfield’s on-stage sequel.

From Koe’siestes to Kneidlach – With Kids! is the highly anticipated sequel to the one-woman play From Koe’siestes to Kneidlach. The first instalment looked at the relationship between a coloured girl, who grew up in the Cape Flats — and a Jewish boy from Johannesburg’s East Rand. Now set two years later, the “mixed-race-mixed-everything” couple is married and has decided to start a “mixed everything” family of their own.

The autobiographical play, which stars South African actress Chantal Stanfield, is directed by theatre director and actress Megan Choritz, who was also the director in the first instalment. 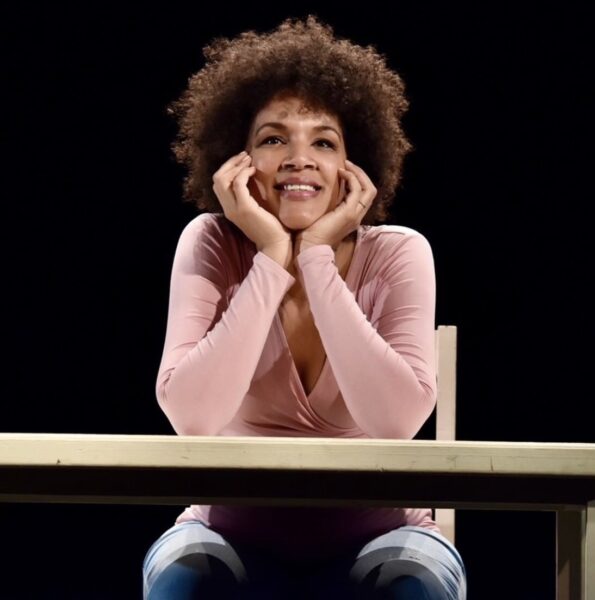 This production depicts the challenges that both Stanfield and her husband face with their decision to start a family and raise “beige babies”. Their differences colour everything from baby names to holiday celebrations, hair styles, schooling and religious customs. Each story presented by Stanfield illustrates the funny, the sad and the true, of living in the multi-cultural South Africa — with each situation riddled with complexities surrounding race, religion and acceptance.

Stanfield, however, expresses and depicts such complexities in a comical way. She told Wits Vuvuzela: ‘’Humour allows us to open up more emotionally, it almost tricks the audience into a position of pathos that they wouldn’t ordinarily go to, to confront the uncomfortable things.”

The stage design is very scant – or minimalist perhaps – one  table, a chair and a beige couch, set against a black backdrop. The well-crafted narrative is what carries this production. Stanfield easily switches between characters, leading audiences to forget that they are watching a one-woman production.

Stanfield plays with time by revisiting both her, and her husband’s childhood experiences and the challenges they now face as expectant parents. The difference in their upbringings is ever present, yet this production shows how they have created the very best “mixed life” for their child.

The choices behind the one-woman show, according to Stanfield, were manifold, but she said it was a bit of a selfish choice – “I wanted to play all these characters myself, as an acting challenge.”  The playful depiction of her husband, the colourful portrait of her gay best friend and the cleverly crafted characters that range from judgmental to outright hilarious, indeed all depict Stanfield’s acting ability.

Covid-19 halted the play’s original 2020 premier date, but the show has finally found its way at the Theatre On The Square stage in Sandton.

Stanfield said the prequel connected audiences across cultural, religious and racial lines, and its sequel does the same. What was supposed to be a little production became a beloved hit, with audiences ranging from ‘’Norwood Bobba’s and Kugel’s, to Cape Flat aunties,” she explained.

From Koe’siestes to Kneidlach – With Kids! will make you laugh until your stomach hurts and then at the same time, deeply consider the way you act and the things you say. It is a subtle critique about acceptance and the unfortunate lack thereof in society. Stanfield, through this narration subconsciously pleads with you as an audience member, in a gentle scolding of sorts, to help her create a safe and accepting world for the future “mixed-race-mixed-everything’s”.

Stanfield ends the show with a sincere hope for her little one on the way, “that they will love both koe’siestes and kneidlach”.

Stainfield’s baby bump was not a prop as now the production will return after her maternity leave, but final dates have yet to be set. According to Stanfield, Cape Town is the next stop.

FEATURED IMAGE:  From Koe’siestes to Kneidlach – With Kids! is the sequel everyone has been waiting for. Photo: Elishevah Bome