Fourth-year bachelor of arts student Ndodana Ndumo Ntuli is a performer, model, videographer and artist who creates sculptures that seek to promote and unite the African community.

The 23-year-old says he did not initially know why he wanted to be an artist, but through making sculptures and sketches, he realised he enjoyed the feeling he got from creating art.

Inspired by the ninjas, Ntuli’s current project (presently untitled) is about an African warrior who wants to overcome social barriers and to meet their potential in society by transforming their identity. In doing so, the African man is choosing his identity and not the stereotypical identities placed on him by society.

Ntuli began to develop his interest in art at Sparrow Foundation School, Johannesburg, a specialised learning centre that shifts away from mainstream due to it catering to students with remedial needs and offering psychosocial support in a creative way.

This is where Ntuli started engaging with when he became part of a group called “Crazy What What” that performed acts about social awareness and comedy at school assemblies until grade seven.

In his transition back to mainstream education in grade eight, he lost touch with art but regained that connection during his gap year in 2018. During this time, he worked as a graphic designer and coffee barista at Design Simplified which drove him back to sketching and drawing again, building his art portfolio while also growing his love for it.

His love has inspired the creation of frames made of ropes, wires and newspaper that are worn on the head and shoulder, over a plain black outfit to achieve what he calls “Aesthetics of Beauty”. He says his frames are crafted to fit the human body, and represent “a figure that is still, in form of presentation”. 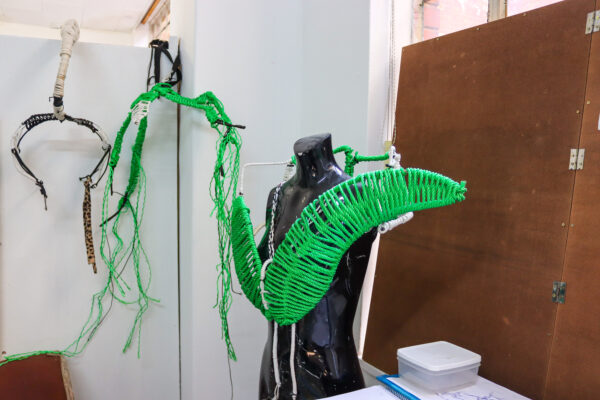 Ntuli says his work is influenced by decolonisation and African storytelling, and he “decolonises the material” by re-imaging the symbolism of each material. Ropes symbolise slavery which he uses to empower the African body and create beauty out of what was negated. Similarly, wire and newspapers represent barriers and propaganda that limit one’s potential. By wearing these materials, he is changing the negative connotations associated with them and, that way, retells reflective African tales of the modern African man.

Although he loves art, Ntuli also sees himself venturing deeper into modelling and acting which he has already explored with students from the Wits department of film and television in the productions of short films such as The Basement and The Double.