The geology department’s “mineralogical treasures” lit up the Origins Centre in first ever public display.

Rare gold-bearing quartz were on exhibition at the Origins Centre for one day only on May 28, 2022, as part of the centre’s ’10 exhibits in 10 months’ celebration of Wits University’s centenary.

The gold-bearing quartz, belonging to the university’s geology department, were on show to the public for the first time ever. The rocks stay in a safe that is managed by the head of the school of geoscience.

Most of the rocks were mined from the early 1900s in the Witwatersrand Basin in mines such Driefontein and Middelvlei Mine. The quartz usually possess amounts of gold that are microscopic and invisible but the ones at the Origins Centre were rare because of the amount of gold visible.

The exhibition featured two glass caskets. One was filled with two gold-bearing quartz and the other had 15 placed on blue velvet cloths. The rocks varied in size from smaller than a fist to the length of a forearm. The amount of gold in each rock varied with some being invisible to the eye while others were almost entirely covered in gold.

Some of the quartz were milky white with gold intertwined in and around the white crystal. Others had some black colouring which Professor Richard Viljoen, who has over 30 years of experience in the mining industry, said is a conglomeration of other minerals including carbon. 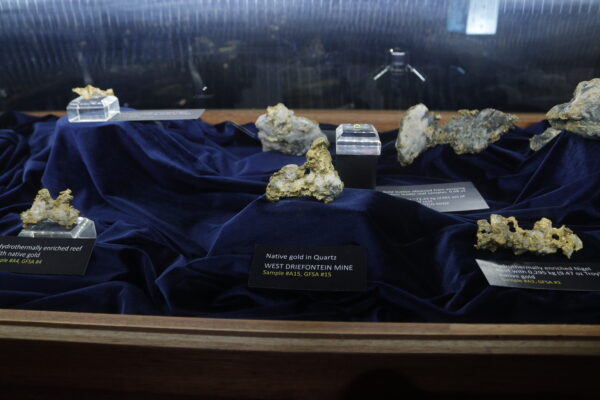 Gold-bearing quartz mined in the West Driefontein Mine in the Witwatersrand Basin. Photo: Tylin Moodley

Head of geosciences school Gillian Drennan told Wits Vuvuzela that the gold-bearing quartz were “extremely rare” due to the amount of gold that was visible. Usually, quartz the size of the ones exhibited, contain milligrams of gold that are not visible but within the larger glass casket Drennan estimated a few kilograms of gold sparkling under the lights.

David Russo, a geology master’s student, told Wits Vuvuzela that it was amazing “to see the sheer amount [of gold]” as it is something he had “only read about in textbooks”.

The value and rarity of the quartz were emphasised by the presence of security guards standing at each of the entrances. Dr Sharad Master, a lecturer in the geology department, said that he had been in the department for more than 40 years but had never seen the specimens before as they were kept in a safe. 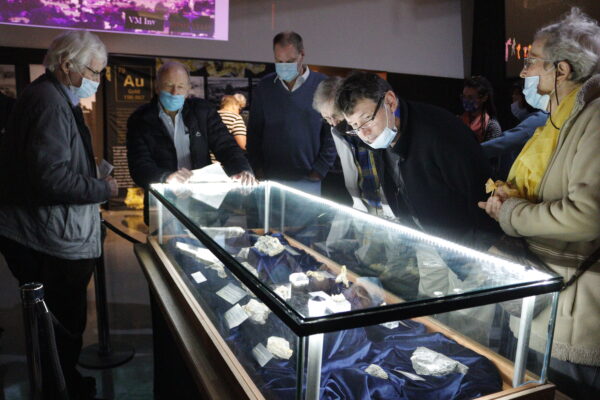 A guest at the exhibit, Anne Challis, said she and her husband had attended the event because they were part of the Origins Centre’s mailing list. She had been to previous exhibits of the centenary campaign and enjoyed seeing the gold-bearing quartz because they are “a huge part of Joburg’s history”.

The gold-bearing quartz were the fourth exhibit of the Origins Centre’s ’10 exhibits in 10 months’ campaign. The next exhibition, on June 25, 2022, will be of ancient, largest hand axes.