Top Gun: Maverick is the sequel to the Top Gun film released 36 years ago. The movie was released in South African cinemas on Thursday, May 26, 2022.

‘Maverick’ must train a group of TOPGUN graduates to complete an impossible mission against a foreign enemy. ‘Maverick’ trains his late wingman’s son, Bradley ‘Rooster’ Bradshaw played by Miles Teller, which forces ‘Maverick’ to confront the tragedy of his former wingman’s death.

The first movie portrayed a typical hero-and-villain dynamic between Mitchell and Kazansky which ended with the two settling the score after a successful mission. In the new film, the personal battle for Mitchell is his desire to be recognised for what he still is.

The personal struggle Mitchell faces throughout the film is captured by the director using a mixture of close-up and extreme close-up shots of the characters’ faces. For example, Mitchell visits Kazansky and a close-up of Mitchell is filmed when he says “It’s not what I am, it’s who I am… how do I teach that?” The shot then zooms in on the words Kazansky had written on his computer, “It’s time to let go.”

Although the actors whose roles were as pilots had to learn how to fly a jet, in the film, they did not fly the jet themselves. They had to complete an intensive training programme in order to film the flight scenes inside a real F/A 18 Super Hornet. This shows an incredible range of acting by the cast to complete their scenes while experiencing the gravitational force of flying a military jet. 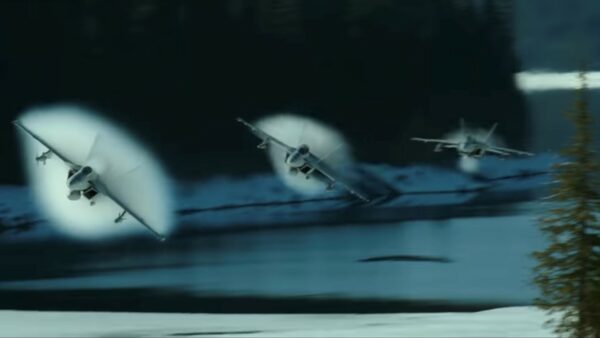 The use of computer-generated imagery (CGI) is limited which keeps an authentic feel to the movie. An example of CGI used was during a dogfight scene (an aerial battle between fighter aircraft), where missiles are targeted at the planes. The planes were flown to ensure the authenticity of the manoeuvres, but the missiles were added in through CGI in post-production which differs from the modern CGI approach of other films.

The film seems to take a very predictable story line for much of the first half. Mitchell trains the pilots following a standard predictable format building up to the most exciting part in the second half of the film. The first half could have been developed in a more captivating way rather than the slow build-up of Mitchell returning to the training programme.

This sequel can stand alone as the main storyline is not compromised even if the viewer had not seen the first film, although they may miss out on the nostalgic impact of the film. This nostalgic aspect is explored with flashbacks to the past, music and character interactions that mimic similar moments in the 1986 film. This aspect is most enjoyable as it brings back memories of watching the first movie.