Methane and cattle farming go hand in hand as a cause of climate change, but the smaller farms with little impact in the industry are struggling for their survival.

Cattle farming has been around for many centuries, with the first domesticated herds being established about 10 000 years ago. The meat and milk derived from cattle is used in a variety of products and is a valuable food source for millions of people across the world. As the old saying goes, however, ”nothing lasts forever”, and is the cattle-farming clock ticking faster than expected?

Methane is a gas formed when one carbon atom combines with four hydrogen atoms. The gas is always mentioned when talking about cattle farming, due to the role it plays in global warming. Methane remains in the atmosphere for around 12 years, which is far less than carbon dioxide does (Carbon dioxide can remain in the atmosphere for centuries), but it is 25 times more effective at trapping heat than carbon dioxide, according to the United States Environmental Protection Agency. Due to the shorter length of time that methane remains in the atmosphere, it is an easier greenhouse gas to target to slow global warming.

About 60% of methane in the atmosphere can be attributed to human activity. Livestock produces methane, with cattle doing so as they digest their food. Cattle are part of a group of mammals called ruminants, which means they have four chambers in the stomach. In the rumen, the first chamber, vegetation and grass ferment, producing the methane and other by-products released into the air by the cow belching.

Climate change effects are becoming noticeable in everyday life. Cattle farming, an industry which itself contributes to climate change, is now also feeling the effects of the changing climate. The cattle farming industry has come under huge scrutiny over the past few years. It has been highlighted as a major cause of climate change due to the methane produced by cattle, the amount of land required for grazing and other food and water resources needed for the cattle.

While climate change is hitting this industry too, it is the farmers with small farms who are affected the most, such as Eddie Price, who owns Tinderbox Farm, a meat farm in Tonteldoos, Mpumalanga. Price owns a farm of 300 hectares, yet has only 100 cattle on it; a ratio of three hectares (30 000 square metres) per animal. Price argues that, if anything, 100 cattle on that much land is a net gain for the environment. He says there are more than a million trees on his property, and if he did not have livestock the natural decomposition of the grass and other vegetation would yield the same amount of emissions.

“The minerals in the grass [have decreased], grass does not grow like it used to … [it] grows more slowly due to the heat.”

Rudi Breedt, farm manager at Irene Dairy Farm, agrees with Price and says the overpopulated farms are the bigger issue. Irene Dairy Farm has around 260 head of cattle across 30 hectares, which is a lot less space per animal at around 1 100 square metres per animal. The overpopulated farms Breedt and Price are referring to are called feedlots. According to Farmer’s Weekly, “The basic principle of the feedlot is to increase as rapidly as possible the amount of meat produced by each animal.” A major feedlot in South Africa is Karan Beef, the largest feedlot in Africa.

Karan Beef accommodates 210 000 cattle in total at its Heidelburg feedlot, Nigel farm and holding stations. There are 2 330 hectares of land on the Heidelburg feedlot and a further 3 500 hectares at the Nigel farm: a total of 5 830 hectares with 210 000 cows. That is around 277 square metres per animal, but according to Karan Beef there are around 150 000 cattle on the feedlot alone, which works out to just 155 square meters per animal.

Laura Pereira, an associate professor who works for the Global Change Institute at Wits University, says drought and flooding caused by the variability of weather patterns due to climate change affect farmers’ ability to produce reliably. This was particularly felt by another farmer, Piet le Roux (35), who has spent his whole life on his farm in Limpopo. Le Roux says, “It has become much drier over the years.” He worries that future droughts “might result in me having to reduce my herd partially or completely”.

Each farm experienced different impacts thanks to localised weather patterns. Breedt, when asked if climate change had affected the Irene farm in the past 10 to 15 years, simply replies: “Definitely!” He says it mostly affected the way grass grows on the farm. “The minerals in the grass [have decreased], grass does not grow like it used to … [it] grows more slowly due to the heat.”

On Price’s farm there are chickens and pigs as well as cattle, all farmed for different purposes. The pigs and cattle are used for meat and the chickens produce eggs for the farm. Price says the climate change he has experienced over the 17 years on the farm has been a gradual temperature decrease. They have had to build winter shelters for the pigs to protect them from the extreme cold, which could kill them.

Sarah Roffe, a climatologist at the Agriculture Research Council, says researchers in South Africa have, over the past 30 years, seen increasing temperatures during the day and night. They have also found that heat waves have increased in severity, duration and frequency.  Researchers have found that while rainfall is decreasing in Gauteng, storms are more severe with extreme rainfall events increasing in magnitude and frequency. Roffe says the extreme events of drought and flooding would still occur, but “the intensity of this event [Day Zero Drought in Cape Town] was likely exacerbated by human activities”. Floods such as those in Durban in April 2022 intensified due to global warming, as extra heat added extra energy to the system, says Roffe.

The farmers are directly affected by climate change, with the biggest cost in farming cattle being food. Price and Le Roux rely on their land to produce food for their livestock, so if there is not enough rain they must buy food to feed the cattle. Breedt says to bring in food for the cattle costs from R180 000 to R200 000 a month at Irene Dairy Farm.

Price says another big cost is security. He takes a hands-off approach to cattle farming, allowing the animals to live their lives to the fullest, but this comes at a price as animals are lost to thieves.

All the smaller farmers believe the media has portrayed all cattle farmers in a bad light with regard to climate change. Le Roux says, “[The] big media has twisted the climate change problem and used beef as a scapegoat, rather than identifying heavy industry as the true cause.”

Breedt says he does not believe the small farms have much of an impact.  Roffe disagrees, saying the methane emissions from cattle “have played a significant role in driving climate change”. She says, though, that opportunities to address cattle farming issues are missed “because there is more on highlighting the issue [cattle farming causing climate change] rather than addressing it”.

Pereira agrees with Le Roux and says the cattle-farming industry is not the biggest cause of global warming in South Africa; rather, it is the coal and energy system in place.

The smaller farms are also doing their bit to ensure sustainability. Irene Dairy Farm has installed solar panels to supplement its energy usage. Price has installed a water tap for the pigs, which allows them to drink as they need. This prevents water evaporation and saves time, compared to the old bucket way of watering them every few hours. Le Roux employs sustainable farming practices to ensure the natural supply of grass on his farm is enough to feed his cattle.

Agricultural economist Eness Mutsvangwa-Sammie says, “There is a need for government to subsidise dairy and beef farmers and also come up with innovative solutions that further capacitate farmers to manage the risks.” 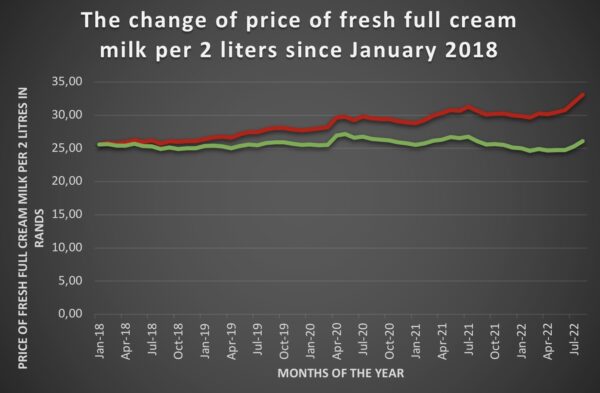 This line graph shows the price of full cream milk per 2 litres since January 2018. The red line is the actual price which is sitting at close to R33 per two litres up from around R25 in January 2018. The green line shows the change in price taking inflation away, illustrating the real price change since 2018.                Graph: Colin Hugo

Price says the government is not taking the situation seriously enough: “People have not realised the price of diesel has doubled since the last harvest of grain.” He says it can go one of two ways: either farmers decide not to plant, or they plant but then charge a much higher price due to increased costs. This would cause further inflation on food, and the country is already above the targeted 3-6% rate, with inflation currently at 7,5% for September 2022.

As many as 757 628 people were employed in the commercial agriculture industry in 2017, according to Stats SA. Of this number, 162 116 worked in farming of animals in particular. The total number of people employed in farming is less than 2% of the population, yet they have the duty to provide enough food for the entire nation.

Climate change is making it more difficult to produce in the same consistent way. Input costs are increasing, and Mutsvangwa-Sammie says that due to the rising cost of production “the agriculture sector will suffer, which in turn will affect food supplies”. Mutsvangwa-Sammie says, however, it is important to secure “infrastructure that will mitigate the effects of climate change”. She says farmers ”have to develop more resilience capacity”, and some strategies to fight climate change will come at extra cost.

At the end of the day, consumers will feel it as dairy and beef costs begin to rise and their pockets empty. Due to greater input costs driven by high inflation over the past year, as well as variability in weather, the price of producing products from cattle is increasing. At the end of the line, these costs are carried by the consumer.

Price says, “You have a situation where you have a product that is high in demand, but unaffordable.” Beef farming is too expensive, he says. He believes that of all the farmers he knows in and around the area of Dullstroom and Tonteldoos, none will be farming in 20 years’ time. The reason is rocketing input costs relative to the return, and Price says “the problem is exacerbated by politics and crime in South Africa”.

Tony Silva, a Brooks Running ambassador (Brooks Running is an American sports equipment company) and consumer, says the solution ”ultimately lies within the collective of human beings, by living more simply and lowering their desire for more consumption”. He concludes by saying, “Humanity’s greed is hurting the planet.”