October 6 against private security on Campuses

October 6 movement is calling for unity against securitisation on campuses.

Students and members of October 6, an organisation of workers and students, from Wits and University of Johannesburg (UJ) gathered on Monday to discuss increasing security on university campuses.

Among the issues discussed was “the right to protest”. Member of Right2Know campaign Palesa Kunene said that “police military” must come to an end at universities as it is infringing on protests.

UJ lecturer Prof Jane Duncan said “UJ’s right to protest is limited, you have to apply to protest because protests are regarded unlawful.”

“We need to document all experiences so that we can use that to fight back against securitisation.”

“If the bouncer find you in group of fives they tell you that you are not allowed to be in groups,” said Mathebula.

Campus Control officer Nomathemba Dlamini, who has been working at Wits for 16 years, cried in tears when she was explaining how the “bouncers”, referring to private security, hurt students during protests which lead to injuries.

“Private security should not be allowed in the university premises,” Dlamini said.

The movement was formed last year in July, following a march that included the University of Cape Town, Rhodes, Wits and UJ engaged in. The aim is to link workers and students struggle. 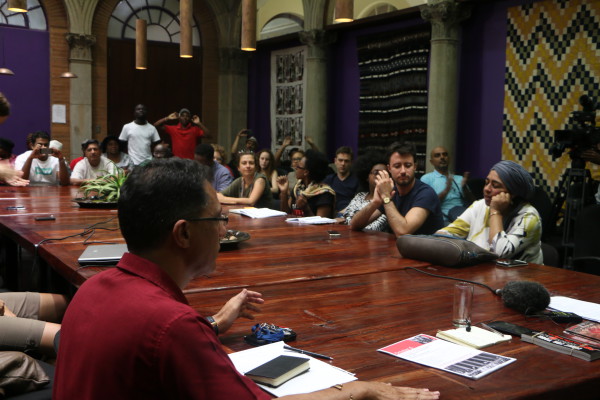 Wits lecturer Kelly Gillespie said that October 6 is an active movement for workers, staff and students to come together to discuss the kind of university they want and “identify the key sides of struggle and need to be worked on in order to create a decolonised public African university”.