– a 9% salary increase for support staff, to be paid at a higher scale at the 75th percentile of the tertiary education sector benchmark
– decent salaries to be given before performance regulations were initiated;
– a resolution of the dispute on shift allowances
– an agreement on sliding scales to advance equity
– the establishment of a childcare facility for Wits employees
– an end to overselling of parking permits in non-designated parking areas;
– an increase in individual research incentives 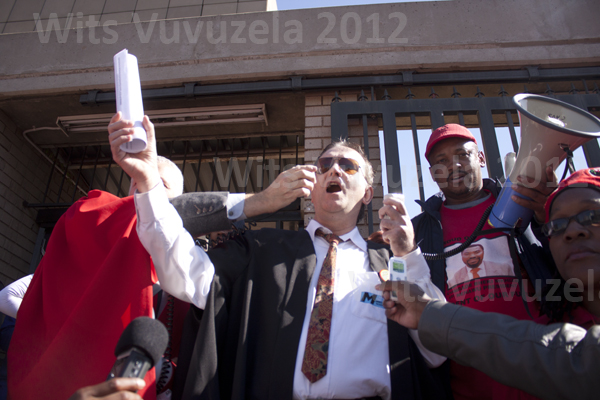 Lecturers and staff members are expected to “shut down” the university on August 2, following what they have called a break down in wage negotiations with the university. Editorial: Council, are you listening?

Academics and support staff have called for an end to what they say has become a deadlock in annual negotiations. The university has rejected their demands on pay, governance and conditions of service.

Vuvuzela has reported on increased hostility in the negotiations between the Academic Staff Association (ASAWU) and vice chancellor Loyiso Nongxa. Academics warn Wits

The academics are demanding a 9% salary increase for support staff, the establishment of a childcare facility for Wits employees and an end to overselling parking permits in non-designated parking areas, among other things.

In a statement released on July 10, Nongxa said he recognised the unions’ right to protest, as long as it did not interfere with the rights of students and other members of the Wits community to access services on campus.

Last month roughly 150 academics and staff picketed outside the entrance of the basement parking in Senate House. Some staff members told Vuvuzela they earn as little as R20 000 a year, despite working at Wits for more than 20 years.Teachers in action over wage disputes

During the negotiations in June, the university said it would cost around R60-million to implement the increase demanded.

The unions are expected to march again on August 2.

Follow more of the strike action on our online segment www.witsvuvuzela.com, or Jay Caboz for more.

Editorial: Council, are you listening?

Jay’s photos of the week