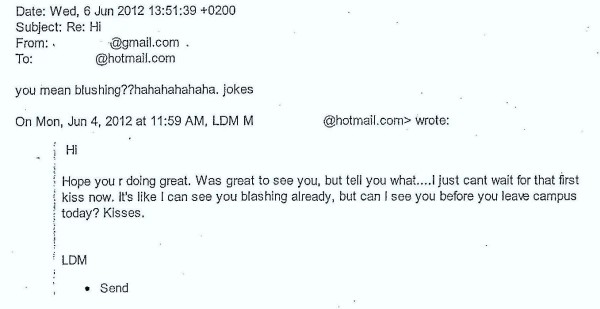 FROM MOYO: An email from Dr Last Moyo to a female student

In response to the concerns raised by Dr Last Moyo in his comment below, Wits Vuvuzela would like to clarify that these emails were not submitted to the sexual harassment inquiry by the student involved. In fact, Wits Vuvuzela has since learned that the emails did not form part of the evidence that lead to Dr Last Moyo’s dismissal.

Wits Vuvuzela felt it necessary to publish this information following Moyo’s interview with the Star. In the interview Moyo, denied any misconduct and said he would appeal the university’s ruling.  The student in question declined to lay a complaint with the university, and we apologise if we may have inferred as such.

More evidence against Dr Last Moyo has emerged after his dismissal from Wits University, last week.

Wits Vuvuzela has received copies of an email conversation between the former senior Media Studies Lecturer and a student who indicated that the emails made her feel uncomfortable.

In an email dated 6 June 2012, Moyo said he could not wait to have his first kiss with the student, who asked not to be named. Wits Vuvuzela has confirmed that the student was a registered Masters’ student at the time and Dr Moyo was her supervisor until he was placed on special leave.

Can I see you before you leave campus today? Kisses

“Hi I hope you are great. Was great to see you, but tell you what … I just can’t wait for that first kiss now,” he said.

In the email conversation Moyo said he could not wait to see the student after their first kiss and then asked if he could meet with her before she left campus.

“It’s like I can see you blashing [sic] already, but can I see you before you leave campus today? Kisses,” he wrote. Moyo signed the email off with his initials LDM which stand for Last Dumisani Moyo.

In an interview with The Star earlier today, Moyo denied any wrong doing and said he would appeal the University’s ruling through the Commission for Conciliation‚ Mediation and Arbitration.

In March, Wits Vuvuzela reported that more than six students accused Moyo of misconduct. He was placed on special leave in April while the university conducted a campus wide inquiry into sexual harassment claims. Last week, after the investigations by an independent legal team acting on behalf of the university, Moyo was found guilty of sexual misconduct and dismissed.

In the five thread email conversation Moyo also asked the student about her mother’s health and if he could see her on Friday the 7th June 2012. She responded by saying her mother was good in health and that a meeting on Friday would not be possible as her mother would still be around.

“She’s fine. I don’t think feasible ngoba (because) she’ll still be there,” she said

TIME TO FLY: an email confirming the flight

The travel agency emailed the flight information to him, which he forwarded to the student. The student was part of a research team that was assigned to help Moyo with [pullquote align=”right”]“Hi, Your ticket. Kisses.”[/pullquote] project due to be completed in Zimbabwe. The flight was paid for by a research grant that was given for the project.

Wits Vuvuzela contacted Moyo for a comment on the email conversation but he declined to answer any questions.

“I don’t want to make a comment. I’ve already been fired what else do you want from me?,” he said as he dropped the phone.