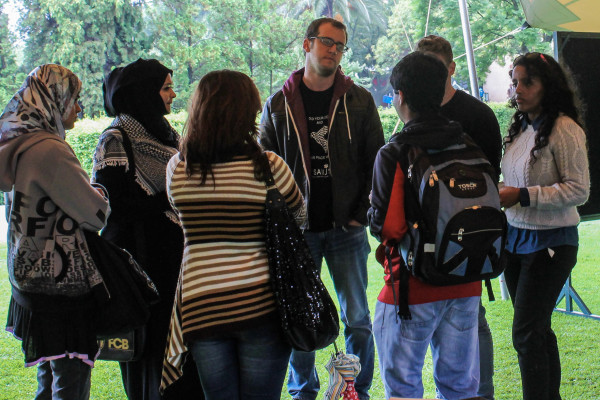 TALK TO ME: Students from Israel engage Witsies under the SAUJS’ ‘Peace Tent’. Photo: Tracey Ruff

Origami paper doves under the so-called ‘Peace Tent’ were the only birds to be seen on the university lawns yesterday as rain dampened the start of Israeli Apartheid Week activities (IAW).

Despite the gloomy weather, Witsies came out in significant numbers to support the ‘Peace Tent’, erected by the South African Union of Jewish Students (SAUJS) as part of their Give Peace Wings project.

For the Purpose of Peace

“We [the SAUJS] decided to set up the Peace Tent [because] the truth is we are never going to get anywhere unless people sit down, discuss, and have rational debate,” said David Isakow, 3rd year Media and Psychology. “We … want to raise awareness about people coming together and making dialogue.”

The initiative encourages any student, irrespective of religion, culture, or political affiliation, to come into the tent and actively participate in dialogue surrounding a number of African and Middle Eastern issues. The idea of the tent is to encourage people to talk.

Visitors were also encouraged to fold an origami dove. “By making a [paper] dove, you are making a [contribution] towards peace”, Isakow said.

On Tuesday, Serge Tshibangu, PhD (CompSci) candidate, spoke in the tent about his experience as an African visiting Israel two years ago. Born in the DRC, Tshibangu now lives in South Africa. “Israel is a country that needs African support,” he said. Issues could always be solved “by talking to each other,” Tshibangu added.

Two Israeli students, Kokit Hylo and Eyal Cohen, told Wits Vuvuzela they had volunteered to come to South Africa to “promote education about Israel across the world because of a lot of misinformation [about the conflict in Israel]”.  Cohen, who is also part of an Israel awareness project called Stand with Us, felt it was important to “share his personal experience of Israel” with South African students.

Wits students who visited the tent were generally positive about the intiative. Safiyya Paruk, 1st year MBBCh, believes the Peace Tent is a “good thing to have [as] it brings things into perspective”.