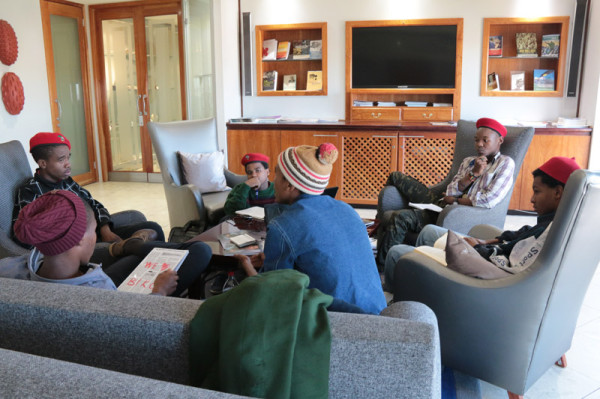 Wits vice-chancellor Professor Habib has responded to questions from Wits Vuvuzela about the issue of the registration of the EFF (Economic Freedom Fighters).

Responding via email, Habib said, “The SRC president claims that the EFF did not apply on time … EFF suggests that the reason is a political one, and are appealing to me to overturn the decision.”

“The university will not allow political rationales to be used to exclude anyone, but will need to investigate the allegation before acting.”

In response to the protest currently underway in Senate House, he said, “As far the protest goes, I have said that we will investigate and then act. We have enforced the principle of Wits being a free space, even when it has been deemed unpopular in certain quarters. This principle will be defended again.  But we will investigate what happened before we act. One should not make decisions because one is being muscled. One makes decision after investigating accusations and then acting by principle.”

Students in solidarity with the EFF (Economic Freedom Fighters) are not being allowed up to the 11th floor of Senate House today.

The Wits EFF staged a sit-in in the office of the vice-chancellor Professor Adam Habib throughout the day yesterday to demand the registration of the organisation as a club and society. But according to Mbe Mbhele, one of the students currently part of the protest, students who want to join them are being prevented from doing so.

As of 8am this morning, six Wits EFF members had been relocated from the vice-chancellor’s office to another section of the 11th floor of Senate House. They claim that they were threatened with interdicts and tried to resist. They have been told by Campus Security that they cannot leave the room and can’t get food or their books to study as they would not be allowed into the room.

Downstairs, students are being asked for their student cards and security is not allowing anyone up to the 11th floor. “This shows how much the university doesn’t respect the right to associate [with a political party], they are infringing on our right to protest … this is political intolerance,” one of the students, who refers to himself as a “fighter” said.

[pullquote]”We are tired of waiting to wait. This time, we decided not to wait anymore. As a radical organisation we must take actions that agree with our manifesto. We will continue to occupy.” [/pullquote]

Protests must have rules

Last night and this morning, Habib and members of the EFF engaged in a debate on Twitter. “Habib’s responses on Twitter are not in our favour,” one of the students said. @EFFSpokesperson asked Habib to “be the good professor and register the EFF now!”

However, Habib (@adhabb), tweeted, “you have the right to demonstrate within rules. As I said freedom comes with responsibilities, democracy with rights.” In response to the removal of the protestors from his office he said, “There are (sic) sensitive material in my office. It is irresponsible to leave people there overnight. Protests must have rules.”

“We have been studying, reading books and having debates about men like Steve Biko, because they are who we draw our inspiration from,” one of the “fighters” said. “They had to tighten security, we were respectful of their property the whole day, we didn’t vandalise.”

EFF occupation is being practically impactful

Monwabisi Dlangana, one of the original occupiers said this all “comes back to the university’s intimidation tactics. The first thing they do is take your student ID and card. Before you [Wits Vuvuzela] got here, we were singing, but were asked by a university meeting to calm down”. He added, “We are tired of waiting to wait. This time, we decided not to wait anymore. As a radical organisation we must take actions that agree with our manifesto. We will continue to occupy.”

“It’s 4 weeks to elections and we can’t campaign, but the PYA (the Progressive Youth Alliance) are able to continue. We have a membership of above 500 students who have signed EFF documentation and their basic fundamental right to organise is being denied,” another one of the “fighters” explained.

“We don’t know how Pam Dube reached the conclusion that we submitted our application [to become an official student society] late, we did submit on time,” Mbembhele said. However, according to Habib’s tweet, “We have repeatedly asked EFF for a copy of their application to become a student society. We have not yet received it”.

When asked if they felt they were having an impact with so few numbers, Dlangana said “We are being practically impactful. When students come back next week they will know … even at home students are thinking about this.”