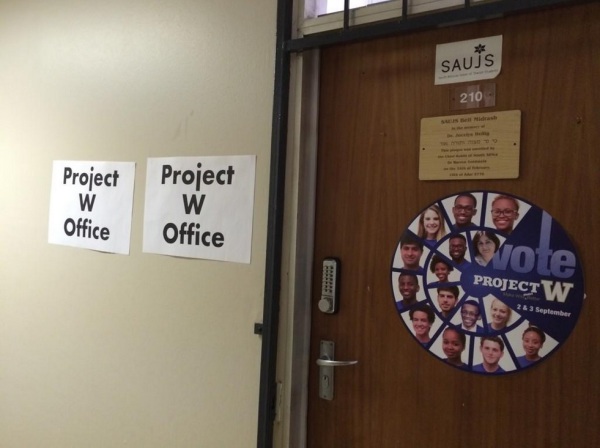 DIGS: Project W and SA Union of Jewish Students shared an office during the election campaign period as shown in this photo provided by political rivals the Progressive Youth Alliance.

Wits student organisation, Project W are being challenged on their apolitical and non-partisan stance, after they used the South African Union of Jewish Students (SAUJS) offices during the Student Representative Council (SRC) election period.

In a Facebook post, Progressive Youth Alliance (PYA) candidate Shaeera Kalla called the organisation out for claiming to be  “apolitical” and tweeted a photo of Project W posters on the door of the SAUJS office in the Matrix.

“This kind of sums Project W up. apolitical my foot!” wrote Kalla.

Project W has refused to get involved in non-student issues,  including the recent war in Gaza. PYA has criticised this and accused the organisation of being funded by pro-Israel organisations such as SAUJS.

Project W member Tim Karayiannides emphasised that the party does not receive any support from SAUJS, “nor do we support SAUJS” and said the organisation merely lent them an office. He said Project W did not have its own office space and laid the blame for this at the PYA.

“SAUJS lent us their offices when we were failed by the PYA-led SRC that ought to be encouraging more robust political competition,” he said.

According to SRC president, Shafee Verachia, many new clubs and society organisations (CSOs), such as Project W which was founded last year, do not get office space.

“There is a mass shortage of resources for CSOs,” Verachia said. “It is not just Project W, but many clubs and societies which are affected by the university’s continuous lack of investment into student life and CSOs.”

SAUJS chairperson Ariela Carno denied Project W was working out of her organisation’s office. She said SAUJS was only  “helping out” Project W.

“They stored some stuff in our office, which means that they are not functioning out of the SAUJS office. They merely used out office for some storage space.”

According to Carno, other societies did offer to help Project W, but SAUJS’ office was “just better located”.

Kalla also claimed Project W receives funding  from the South African Jewish Board of Deputies (SAJBD), “whose headquarters are in Israel”. The SAJBD is based in Johannesburg and operates throughout South Africa.

Project W chairperson and SRC member Jamie Mighti, responded by saying his organisation and election campaign was funded by members.

“The organisation has about 200 guys who are really committed,” he said. “We have a budget of about R50 000 and most of that came from the candidates.”

Last month, he told Wits Vuvuzela that Project W candidates are required to contribute R1 000 to the campaign.

He explained that some of the candidates have more money than others, so they all put in different amounts. “I put R5 000 towards the campaign myself, because I believe in what we do.”

He called the attack on their funding by other parties and election candidates “malicious”, saying that rivals are trying to do is discredit the way Project W is run, “because it is different from the way their parties.”

Karayiannides backed up Mighti’s statement: “Project W has never accepted nor received money from the SAJBD. We have a number of Jewish supporters and candidates and may have had donors who happen to be Jewish.” He accused Kalla of anti-semitism.

The SAJBD was unavailable for comment at the time of publication.