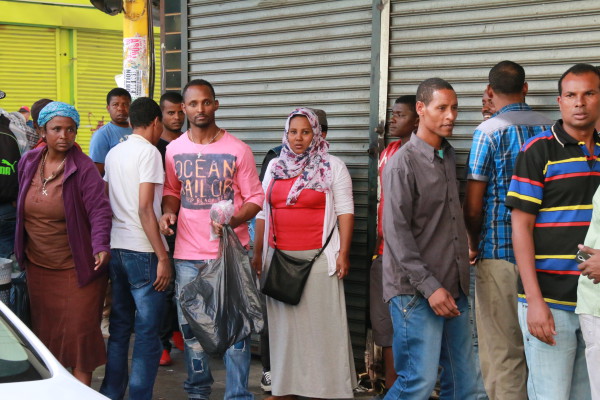 Shop owners on Jeppe Street locking up their businesses in fear of xenophobic attacks in Johannesburg on April 15, 2015. Photo: Reuven Blignault

Foreign shop owners closed their businesses amid fears of xenophobic attacks in Johannesburg’s city centre today.
This comes after at least five people,including a 14-year-old boy, were killed when violence broke out in KwaZulu-Natal yesterday.

Earlier in the day police were scattered throughout the CBD in anticipation, as violence against foreign nationals threatened to spread to Johannesburg.

Many of the busy inner city shops were deserted with shutters pulled down due to threats of similar violence and looting to that of Durban’s city centre. The atmosphere of anticipation was occasionally broken by bursts of police sirens.
Some shop owners were questioning whether they should remain or leave after rumours that an attack was planned on foreign businesses.

Somali-born Amin Bama said, “If I open my shop they will take everything and then I won’t have anything to sell.”

A crowd gathered on Jeppe street and waited for the rumoured attack. Many of the foreign nationals discussed the fear of a possible pending xenophobic attack during the day and how they felt about South Africa.

Muswamba Kabemba, a Congolese informal trader, said that she was afraid to go home because the taxis are operated by South Africans.

Others such as Congolese national Theresa Kauenda blamed the government saying that they have nowhere else to go and the government is not helping them find work or a refuge.

“They are keeping us in the fire, we are living in fire.”

Many of the foreign nationals felt like they had nowhere else to go because their countries suffered from the effects of civil war and many members of their families live in South Africa.

A Zimbabwean man named Alex Ndlovu, who has lived in South Africa for 17 years said, “All my children stay here and my wife is from here.”

The violence over the past few weeks came after King Goodwill Zwelithini reportedly said that foreigners should leave South Africa last month in Pongola.

There is reportedly a heavy police presence in the area this evening after hostel dwellers stoned passing vehicles according to Eyewitness News.

Nigerian clothing shop owner Jackson Brown said he locked up his shop because this is not the first time this has happened.

“They will come with sticks and knives.”

These incidents echo those of 2008 when 60 people died during xenophobia attacks.