Wits University has decided not take any action against Mcebo Dlamini for his controversial ‘Hitler comments’ but the former SRC President says he will sue the Wits vice-chancellor if he does not apologise. 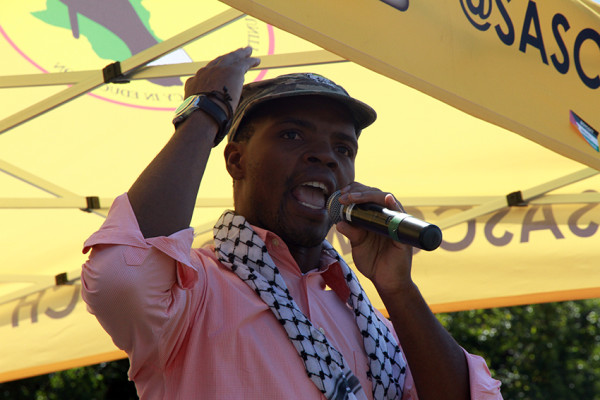 Former Wits SRC president, Mcebo Dlamini during his speech at the IAW rally.

Wits University has found that while there were grounds for Mcebo Dlamini to be “charged for failing to meet his fiduciary requirements as SRC President”, the institution will not pursue these charges as Dlamini has already been removed from office. This is according to a statement released by Wits late last night following a review of the decision of an earlier disciplinary process against Dlamini.

Speaking to Wits Vuvuzela, Dlamini said he had told vice chancellor, Prof Adam Habib, several times that there was nothing wrong with the statement he made in April on his Facebook page.

“Instead he went around to the media, twerking in my name,” Dlamini said. “He must apologise or I will sue him.”

Dlamini was found guilty of misconduct by a Student Discipline Committee  in May and the “independent Appeal and Review Committee” confirmed this finding.

“Going to the hearing itself I expected nothing” said Dlamini.

“A 100% white committee, with two of my Wits lecturers,” said Dlamini. “How is that independent?”

The review committee did not uphold the second charge relating to another undisclosed 2014 incident. According to Dlamini, these are assault charges on comments he made against head of residence life, Rob Sharman.

On the basis of the confirmation of the first finding, the university Council confirmed the vice chancellor’s decision to require Dlamini to stand down from the SRC. Dlamini will however remain a student at Wits.

“I have defeated them,” Dlamini told Wits Vuvuzela. “Their plan was to kick me out of Wits and they have failed.”