The reasons for Jamie Mighti’s resignation has attracted much attention on the Wits University campus this week. In Mighti’s resignation letter to Wits Vice-Chancellor, Professor Adam Habib, he highlighted “irregularities” within the SRC as his reasons for resigning, however there are other reasons which the student body feel may have influenced Mighti’s decision.

Conflict and controversy has surrounded the news of Jamie Mighti’s resignation from the SRC which was made public at the beginning of the week.

Mighti, stepped down as the SRC’s campus wellness officer with immediate effect on July 3 and notified Vice-Chancellor Adam Habib in a letter, which was given to Wits Vuvuzela on Tuesday evening. 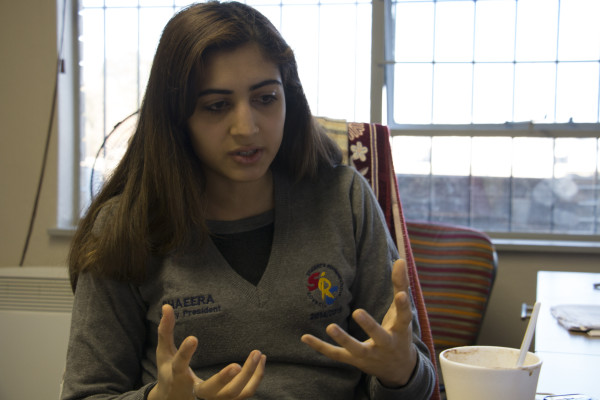 SRC MEANS BUSINESS: Acting SRC president , Shaeera Kalla said they are dealing with the resignation of Jamie Mighti, however students need to be served, so business will carry on as usual. Photo: Riante Naidoo

Shaeera Kalla, acting president of the SRC, told Wits Vuvuzela. “No one knows the true reason behind why Jamie has resigned.” However, Kalla said she believed Mighti was facing disciplinary charges related to an accusation of sexual harassment. Kalla added that neither she nor the SRC was aware of the status of the charge.

“We’re in the dark like everyone else,” Kalla said.

Kalla could not confirm whether Mighti was resigning because of the disciplinary charges “but I think logic would lead to that … If I were in his position I would do that,” she said.

Wits University spokesperson, Shirona Patel, said the university was aware of Mighti’s resignation and confirmed that he was the subject of an investigation but declined to offer further details.
“We can confirm that the University is investigating a matter concerning him but at this stage we are not at liberty to disclose any further details regarding this matter,” Patel said.

Mighti declined to comment to Wits Vuvuzela about his disciplinary hearing.

“It is my view that the VC was biased in failing to act against Shaeera Kalla and her compatriots within the PYA [Progressive Youth Alliance],” he said in the letter.

Kalla, said she disputes Mighti’s accusations and had a “very fundamental problem” with his claims.
“There was a formal investigation done by [Deputy Vice Chancellor] Prof Tawana Kupe and none of those accusations were true,” she said.

In a report on the investigation that was given to Wits Vuvuzela, the university found that the SRC had not held some meetings nor kept minutes in line with its own constitution. However, it said there was “no evidence of misappropriation or misuse of funds”.

Kalla said Mighti’s resignation was something the SRC has to deal with “but to be honest business goes on as usual as students need to be served”.

She believes the university is “under pressure” because former SRC president, Mcebo Dlamini, was found guilty of a disciplinary charge and “to the outside world it seemed the processes were sped up” for him. “Now there’s another one awaiting his outcome,” she said.

Kalla said the SRC did not tolerate wrongdoing by student leaders: “We condemn any misconduct on behalf of a student leader because the SRC constitution is clear on that and leadership must be held accountable at all times,” she added.

“Our responsibilities are not to Jamie or Mcebo, they are to students,” Kalla said. “I think it’s ridiculous that people think the world must stop because of people like them. There are 31 000 students at Wits, we’ve really got no time for this.”